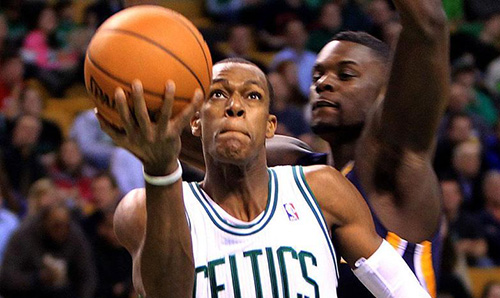 The rumor mill is continuing to spin around the Detroit Pistons. The Boston Globe recently reported that the Pistons still have interest in Rajon Rondo, despite acquiring point guard Brandon Jennings. If GM Joe Dumars does continue to pursue Rondo, that will be bad for the team. I like Rajon Rondo. I think he is a good guard and a great passer, but I don’t want him on the Pistons. Although Rondo is a big upgrade in terms of being able to distribute the ball and on defense, the Pistons should keep Jennings for a number of reasons.

First, Jennings can be the point guard that the Pistons are looking for. Rondo was always surrounded with talent since his debut, while Jennings was not. We can’t say for sure how Rondo will perform with a new young team surrounding him. Second, Rondo is coming back from a torn ACL injury and that may affect his play next season. Jennings spent his first few years with the Milwaukee Bucks and he didn’t have much help. A new, young and talented group surrounding him, Jennings has a big chance to make an indelible impact.

Jennings’ assist numbers aren’t up to par with Rondo’s, but relatively, aren’t that bad. Jennings averaged 6.5 dimes last season and has averaged 5.7 over his career compared to Rondo’s 8.3 career average. With Andre Drummond, Josh Smith and Greg Monroe in the frontcourt, it will give Jennings a lot of players to pass it to and that presence of athleticism in Drummond and J-Smoove alone should boost his assists numbers. In fact, Jennings assist numbers have been on an upwards trend since 2010. I see no reason that that would stop this season.

Both Rondo and Jennings have a bad reputation as kind of crazy guys. Why trade one for another? If you are going to use Jennings as trade bait, at least trade for a young true point guard that has a good attitude as well. Jennings has something to prove and the Pistons are giving him that chance. At least up to the trade deadline. He now has the opportunity to be the leader of a young talented team and prove that not only can he be a scorer, but an all-around guard that can score, play defense and dish the rock as well.

Jennings hasn’t hit his prime, while Rondo is currently in it. Rondo can’t get any better in my opinion. Jennings has upside and youth. If Dumars trades for Rondo that will just be a temporary fix. When Rondo hits his 30s and drops off, the Pistons will end up having to go on a point guard search yet again. That’s why Dumars shouldn’t purse Rondo. They have their future franchise guard on their roster now. Trading him would be a mistake. Give the young player a full chance to prove himself.