Trending
You are at:Home»Television»Review ‘Fear the Walking Dead’ S2 E2 – We All Fall Down
By Dalton Baggett on April 18, 2016 Television, Television Reviews 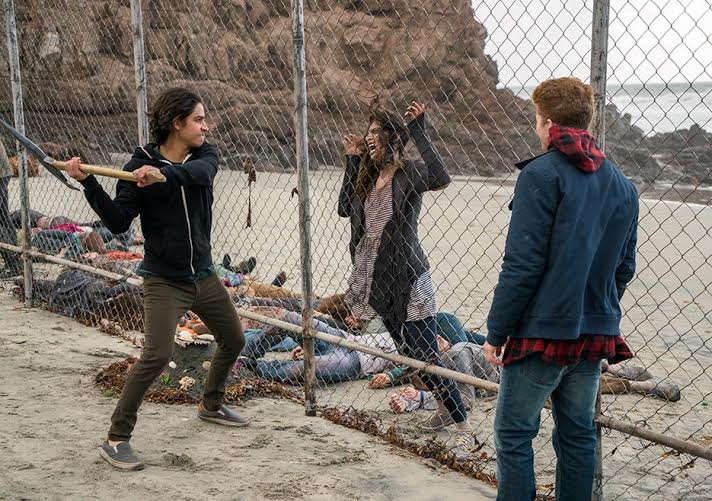 Fear the Walking Dead was back this week with an episode that proves the show is here to stay. They amped up the drama this time, and gave us an episode to really make us think about the end of the world, and how it impacts people differently. The writing in this show is proving to be superb, and this week was no different. Not only was there some great symbolism throughout, but I loved this episode because it had me thinking long after I watched it.

Our group docks on an island because they see lights on a house and decide to try and get some information from the inhabitants. The family takes them in and Travis quickly learns from the husband, who was a park ranger, that a considerable portion of the country has gone to shit. The entire coast has been bombed by the military, and based on the lack of communications from other ranger outposts, everything has been wiped out as far inland as Colorado.

Hearing the places that are being rattled off one by one is eerie, and created a sense of dread that we never really get from The Walking Dead. That show is set in Georgia, and that is all we ever really get to see. Sure, we assume that most of the world has gone to hell, but there is always the hope that somewhere out there is safe. Fear the Walking Dead essentially takes that hope away, and in a way, makes it more scary than its predecessor.

Some of my favorite symbolism from this episode actually comes from an interaction between Alicia and the two small children that live in the house. The little girl is playing Ring Around the Rosie when she asks Alicia what a posey is. As it turns out, the song from that game is actually about the plague that swept across Europe in the 1600’s. Alicia tells the little girl that a posey is a flower that the people kept in their pockets to ward off the smell of the disease. It was really cool for the writers to put this scene in the episode, because it clearly correlates to the new disease that is turning everyone into zombies, and is pretty much just another plague, but on steroids.

My favorite quote from this episode comes from Travis, who when talking about this new world and other times that mankind has faced extinction such as the plague, says the wise words “Nature always wins.” This couldn’t be any more true, and is a great summary of the situation they find themselves in.

Nature may be winning, but it is still necessary for our characters to try and survive, and two of them I wasn’t sure would make it received quality development in this episode. Ofelia has an interaction with her father where she explains that she now knows how this world works. It’s short, but you really get the feel that Ofelia is learning what it will take to survive. I’m also fairly certain that she is never going to smile again.

The other character who finally did something that made me not hate him so much is Chris. He helped Seth, one of the island inhabitants, take out some of the zombies that had washed up on shore and were threatening the fence around the perimeter. He had no problem taking the pick-ax right to the eye sockets of the un-dead. This tells me that he can do what he must when the situation calls for it. My only issue is that he seemed to really enjoy killing the zombies, at least way more than a normal person should enjoy something like that. This is definitely foreshadowing Chris going off the deep end at some point. Probably sooner rather than later.

Unfortunately for our group, the family they are staying with turns out to be a little on the crazy side and shit, inevitably, hits the fan. Before our group sails off, however, we get a scene where Seth has to shoot his mother who had just become a zombie. We’ve witnessed scenes like this countless times on The Walking Dead but for some reason this one felt more real and powerful. It’s probably because it is so new to all of our characters that the emotions come out that much more, but either way, it makes for some great, albeit, hard to watch television.

I thoroughly enjoyed this episode of Fear the Walking Dead and hope that the show continues to focus on the characters rather than zombie killing. We’ve seen plenty of that on The Walking Dead already. We already know the world is collapsing, and I like that this show gives us a deeper look into the devastation this new world has on the characters.