Trending
You are at:Home»Television»Review: ‘Once Upon a Time’ S5 E18 – Ruby Slippers
By Jeanie Weber on April 18, 2016 Television, Television Reviews 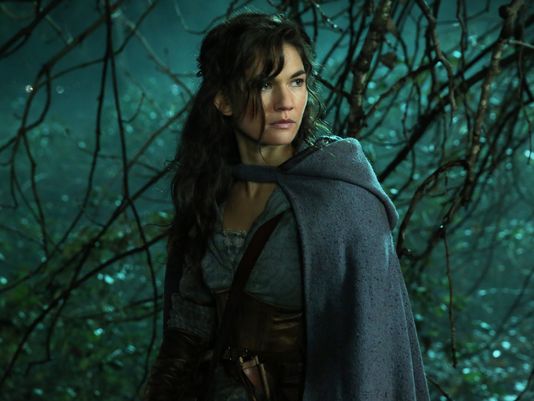 Sunday night’s episode of Once Upon a Time has been a long time coming for some. The writers have teased a same-sex romance for a lengthy period, and this week they finally delivered.

Seeing as Mulan had previously hinted at some feelings towards Aurora, I was surprised to find that the new couple didn’t involve her. Although, seeing how pissy the Internet got after that episode – “just because she dressed up like a man in the movie doesn’t make her a lesbian” – I can kind of understand why they chose to go in a different direction.

I’m still a little bit fuzzy on the time lines, thanks to the plethora of non-linear flashbacks we get each episode, but somewhere along the line between Dorothy’s return to Oz and Zelena’s to Storybrook Dorothy, Mulan, and Ruby crossed paths. And somewhere along that Dorothy and Ruby fell in love. I guess that means I have to take back what I said about Dorothy’s random cameo a few weeks ago being pointless.

Usually I like to make fun of how unrealistically fast supporting characters on Once Upon a Time fall in love, but this is a lesbian fairytale. We’ve been waiting for one of those forever, so I can let it slide just this once.

I’m a little upset it involved characters so detached from the main plot of this season of Once Upon a Time, but it’s a baby step in the right direction. Remember, ABC is affiliated with Disney, so basically anything they say can be considered canon. Our lesbian princess or gay princes can’t be too far off anymore.

Meanwhile, as some super hot girls who could pass for twins make out (I tried to tell my boyfriend that he’d like Once Upon a Time), back in the Underworld the rules of magic continue to crumble.

Zelena and Belle get together for whiskey and girl talk, which causes the girls to make some important decisions. After Belle tells Zelena she’s probably just scared of getting hurt, Zelena finally decides to let herself fall for Hades – I guess it’s true what they say, you look for someone who resembles yourself when choosing a mate; first the lesbians with their matching cloaks and hairstyles, and now the gingers.

Zelena, on the other hand, gives some rather questionable advice. After a quick reminder that Zelena’s pregnancy had been sped up for plot purposes, Belle starts to worry that Hades will do the same to her. Honestly, skipping all the awful things that come with pregnancy sounds ideal, but whatever, she’s scared it means losing her baby that much sooner. But her solution to put herself into a sleeping curse is not the wisest decision she’s made. And this is a girl who fell in love with the Dark One.

Apparently even though you can have a baby while in a coma (it’s true, Google it!), the same does not apply to dark curses. Shame, because that sounds even more ideal than the fast forward option. So, Belle’s genius plan is to have Rumple figure this shit out while she takes a nice long nap and unpause her once he’s sure they get to keep her baby. Which brings up another issue of mine.

And those weren’t the only rules of magic that were stretched this episode – shocking, I know. After Snow and David decide that they can’t let another baby grow up without them (stellar parenting realization right there, guys), Snow says that David, whose name isn’t carved on a tombstone and therefore stuck in the Underword, should return to Storybrook.

David isn’t ready to miss out on all the fun, though; poor guy already gets left out so often. Plus, he still hasn’t had his showdown with his twin like we’ve been promised. So David enlists Killian to help him send Snow home instead. Killian, we can assume, takes this to mean that he should use his hook to scratch out Snow’s name and engrave David’s on the tombstone. I mean, it’s the only explanation for the atrocious handwriting.

Yeah, yeah, I know. A life for a life has always been the rule. Even though Hades clearly chose the people he’d be keeping in the Underworld with him for a reason. So, by that logic shouldn’t he have made it impossible for them to find such an easy loophole?

But sometimes to actually be able to enjoy watching Once Upon a Time you need to ignore the ridiculous and ambiguous rules and just kind of be like, “yep, ok, whatever you say, writers.”