Last week, Chief Garvey was introduced to an inflatable penguin at the therapist’s office. This week, Reverend Matt is (possibly) being stalked by pigeons while he races against the clock to save his church. Let’s jump right into last night’s episode of The Leftovers, since the bank closes at 5:00 PM!

GIRD YOUR LOINS, AS SPOILERS ABOUND.

Character-focused episodes of TV shows, that is, episodes mainly concerned with the actions of any one singular character, are terrific. How can they not be? Training the spotlight on one certain character helps the viewers stay immersed in the action; they aren’t expected to shift focus to a new set of characters, or to competing storylines. To that end, this week’s episode of The Leftovers, “Two Boats and a Helicopter,” centers on the life of Reverend Matt, the guy with the flyers deriding many of the Departed as evil, as he performs a mass at church. He tells the congregation the story of a boy whose parents had another baby (girl) later in life. The sister, being new and needing extra attention, detracts the parents’ attention from the brother. So he asks God to shine the light back on him. The boy soon learns he has leukemia. Prayers answered! Hooray?

But wait, there’s more. In continuing his sermon, we learn that the little boy in the story was the (now cured) reverend, but in concluding his sermon, he asks God to again shift attention, this time for a little girl in a coma. Next thing you know, a burly biker dude storms down the church aisle, punches the reverend in the face, and stuffs one of those evildoer flyers into his mouth.

In the ER, Reverend Matt is visited by Chief Garvey to see if he wants to press charges. He does not. Does Chief Garvey not know what a police chief should be doing on a daily basis? He seems to do a lot of beat cop duties in his newly appointed post. Garvey invites Matt to his house for dinner, like old times (there’s closeness between Matt and the Chief’s family), but Matt asks for a raincheck. Chief Garvey leaves, as I’m sure there’s a parking meter somewhere whose time just expired and a car in need of a ticket. Reverend Matt wanders to a hospital room where an orderly is making up a bed. He assumes that the little girl in a coma has died, but the orderly tells him that no, she woke up! Elated, Matt reveals that his church was praying for her just this morning. God is good all the time! Right?

Wrong. The orderly informs him that she woke up the night before.

Oh, and did I mention that a pair of Guilty Remnants have started to shadow the Reverend?

To add insult to injury, the bank is calling his cell phone, which he regularly let’s go to voicemail. We soon learn that Matt has defaulted on the church mortgage and the building is in foreclosure. When finally reached, the loan officer allows Matt until close of business the next day to pay the bank the $135,000 owed; otherwise, the bank is moving forward with the one offer they have on the property. 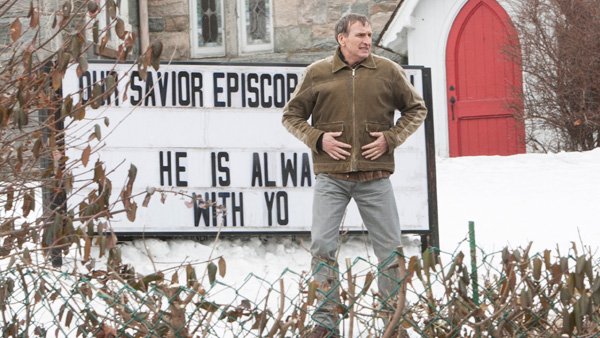 Later at church, a young father arrives and asks to get his baby baptized. The father offers information to Matt about another unseemly Departed person: a man who gambled away his children’s college fund. But before he can print a fresh batch of flyers, Matt first heads to the casino to follow up on this tip. He shares the following nugget with a pit boss who is at first reluctant to share any information:

“Suffering is meaningless if we can’t separate the guilty from the innocent departed.”

The reverend then spots some pigeons that have landed on a nearby roulette table. Okay, that’s weird. 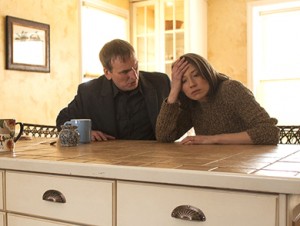 In order to get the money needed to reclaim the church, Matt heads to Nora Durst’s house (the woman with the gun in the handbag) and asks her for a loan. This isn’t a random social visit, though; it turns out they are siblings, AND the church was their family-run church, AND their parents died in a fire many years ago. Nora is reluctant to provide assistance to her brother, telling him that his flyers aren’t helping matters anymore, even though he insists that people are coming back to the congregation and are ready for a change. Nora blames the judge and “that trial” for Matt’s current demeanor. We later learn from a flyer that the judge in question took bribes. We can currently only assume that one of those bribes had to do with “that trial.” She finally agrees to loan Matt the money if he stops producing his flyers. He thanks her by revealing that her husband was having an affair with their kid’s teacher. But it’s the one story the reverend will never publish. Uh, thanks?

There’s a woman waiting for Matt at home. She called earlier, pissed off that they were out of bleach. Sounds like the old ball and chain, but it’s not. It’s his wife’s caregiver, who hasn’t been paid in a few weeks, by the way. His wife is in a vegetative state after a car accident that they got into on October 14 (the same cars from Episode 1 that collided in the background while that mother was frantically looking for her son). After an evening of caring for his non-responsive wife, Matt lays in bed, looking at a creepy painting of Job that hangs, well-lit, on his bedroom wall. He calls out “Help me,” considers how similar his life is to Job’s and has a brainstorm that leads him to Chief Garvey’s backyard… with a shovel in hand.

But Matt is not alone in the yard. When the motion sensors turn on, he finds Jill Garvey sitting on a swing, smoking, and just basically lurking about. She isn’t there for Matt, though, she’s there because she (probably) misses her family. After giving her a half-assed explanation about why he’s there, she writes him a note, “Please don’t tell them I was here.” He agrees not to if she agrees not to tell about him, and she leaves. Matt unearths a nice wad of cash in a jar in the Garvey’s backyard, which he takes and then heads back to the casino. While at a red light he spies more pigeons, this time cooing around on the top of the traffic light. Another sign? If so, are these pigeons a good sign or an ominous one?

Matt interprets their presence as a good one, though, and heads back to that roulette table. He puts all of his money, $20 thousand, down on red… and comes up the victor! The croupier suggests he bring his winnings to a high stakes table, but Matt sees the pigeons as a sign and stays put. In a well-shot sequence, where we watch the roulette ball circulate and drop Scorsese-style around the wheel, Matt’s winnings continue to accumulate, and a pair of onlookers take an interest in his success. The female of the couple decides to put some money down on black, which her boyfriend/husband tells her is bad luck for Matt and will break his streak. Of course, he’s almost made enough money at this point to pay off the bank loan, so this last turn of the roulette wheel is a crucial one.

The ball drops, makes a few revolutions around the wheel, and finally deposits itself on a number. In slow motion it appears as though the woman did mess with Matt’s mojo. But his tense face erupts in a wide grin, and he walks away with $160K. He only gets as far as his car in the parking lot before he gets rolled up on by the boyfriend/husband from back at the table. And in a moment straight out of a horror movie/audience, Matt does what you know you would never do if in his place: he rolls his window down to talk to this grifter. The guy says that they’re short on cash and have to get up to Niagra. And gas is so expensive… so Matt offers a couple of hundred bucks for their troubles. But you and I both know that isn’t going to be enough.

Next, the guy is pulling Matt out of the car, clocking him and taking off with the envelope stacked with cash. But Matt doesn’t relent. He catches up with the guy and beats his head senseless against the ground, grabs his money, and speeds out of the lot.

It is now daylight and Matt is most assuredly heading straight to the bank. The finish line is near! But he passes down a street where a pair of Guilty Remnants are walking and one gets struck in the head by a rock from a passing jeep. Matt does the priestly thing and jumps out of his car to assist the victim. But the jeep reverses course and wham! Matt is hit square in the face by a giant, flying rock. 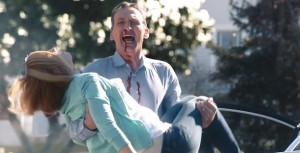 Things start to get weird (well, maybe weirder) at this point. The reverend is walking to his church, greeted at the door by a Guilty Remnant member not wearing white. He enters the church, walks the aisle, follows a young boy over the altar and into an anteroom. Is this a dream sequence, or perhaps the afterlife? It definitely seems like Matt’s life flashing before his eyes: a series of events previously alluded to now take place – a doctor coming to give a young family some grave news about their son, he and his sister watching their house burn while firefighters lounge nearby doing nothing, he and his wife getting into the life-altering car accident on October 14, he and his wife making love (although her face keeps changing from her own to Jill Garvey’s), and finally Matt’s hands going up in flames. At this point he is jarred awake, laying in a hospital bed. He hurriedly gets up, dressed, asks for the time (it’s 4:30 PM), and against a nurse’s instructions, leaves the hospital. Lest we forget, he’s got a date with a loan officer.

Matt dashes across town to his car, still on the street since the earlier stoning incident. If you also thought that the money would certainly be gone at this point, you’d be wrong! The envelope lay intact on the passenger seat. But it’s a few minutes past closing time when he arrives at the bank and he insists a security guard let him in. Things are about to get ugly once again when the loan officer comes to the door and allows Matt to enter. All his prayers have been answered!

But, no, they haven’t. They would have been answered two days ago, Tuesday, which was the day that the loan officer gave as an extension. However, Matt getting hit in the face put him in a semi-coma for two days. It is now Thursday and the bank has already gone to closing with the new owners of the church. Matt dejectedly heads to the church and finds members of the Guilty Remnant dutifully painting over the stained glass with white, throwing out bibles, and moving other items out of the church. Patti, the leader of the group, slowly turns around and gives him an unflinching glare.

The closing credits music was by an excellent artist out of Ireland, named Hozier. Song, the aptly titled “Take Me to Church.” Video is definitely worth watching.