While doing her nightly rounds, the Guilty Remnant lady formerly best described as “that actress who also played Kathy Geiss on 30 Rock” is abducted at a gas station where her GR cohort is using the restroom. The next morning we quickly learn that her name is, well, was, Gladys, and that she is the person referred to in this episode’s title.

Gladys is dragged through the woods behind the gas station, crudely tied to a tree, and then stoned to death by a group of masked assailants that night. Breaking her vow of silence, she begs them to stop, but they don’t, and it’s soon lights out for Gladys.

Her partner returns to the GR compound to alert Patti to the disappearance, and so a couple of vanloads of GRs head out to the woods behind the gas station, flashlights in hand. Of course in the dead of night who else but the dog shooter would be in those same woods? He picks off a few wild dogs that trample past the group. But it is sad, broken Laurie who ultimately makes the gruesome discovery of Gladys’ body. 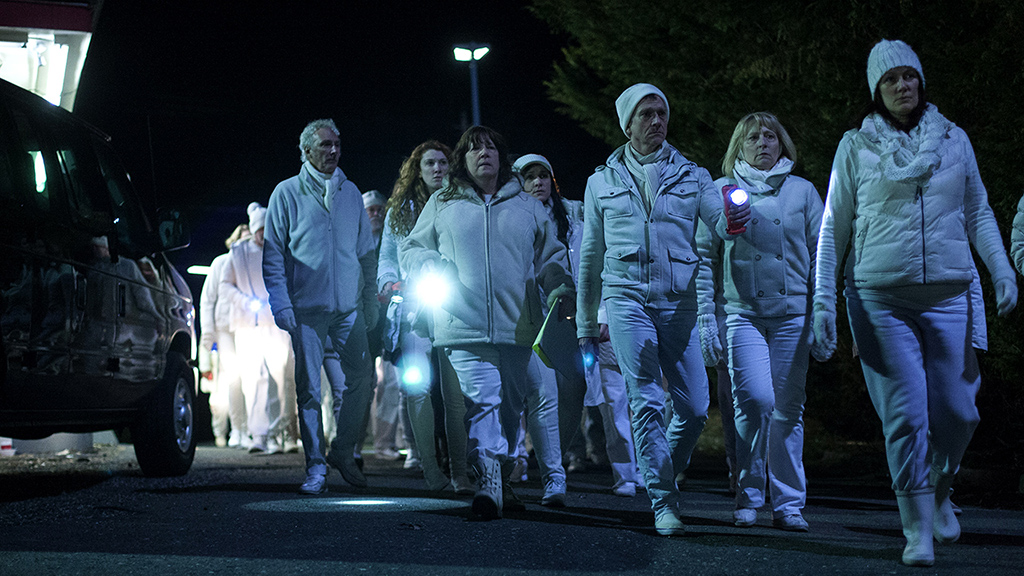 The next morning Chief Garvey is startled awake and rushing to get dressed, however it appears that all of his white work shirts have disappeared! Nothing but empty dry cleaning wire hangers remain in his closet. Have his shirts been Raptured? Did some GRs steal his shirts to help flesh out their own spring wardrobe? No mind, he just puts on a dirty work shirt and off to work he goes. But he is stopped at the front door by Patti, who is holding a written message about the murder. This day is off to a great start!

Chief Garvey and his men arrive at the murder scene. They’ve detained Dean, the dog shooter (we learn his name when he greets a passing park ranger on his morning shift), even though he has a solid alibi. It must be hard to narrow down some suspects when just about everyone in the town is so messed up and odd to begin with. Speaking of odd, the chief heads over to the high school to tell Jill in advance about the attack on the Guilty Remnant. Jill, ever the overly dramatic queen, runs out of her science class in tears. She is convinced that Kevin came to deliver terrible news about her mom, which, when you think about it, seems a bit out of left field. What makes her think something would happen to her mom? And yet, Kevin’s need to rush to the school just to tell Jill that stuff is going down and that tensions are high in town is also really out of left field. Hell, the man constantly calls his son’s cell phone, so we know he knows how to use them; I’m sure he could also just call or text Jill this same warning.

Meanwhile, Laurie winds up having what turns out to be a panic attack and has to go to the emergency room. Her doctor suggests that she cuts out the smoking. Oh, you silly man of science! Patti picks Laurie up from the hospital and they head out on the road. Laurie questions where they’re going, and Patti just turns up the radio in return. It’s Hall and Oates singing “Private Eyes”; how fitting a song for members of a group of people who like to stand around and shadow other civilians on a daily basis.

At the police station, one of Chief Garvey’s men takes it upon himself to contact the ATFE & C (that’s Alcohol, Tobacco, Firearms, Explosives, and Cults) about Gladys’ murder. Garvey freaks out and calls the cop every name in the book. The mayor, who always seems like she’s just hanging around the water cooler waiting to harangue Kevin, steps in and declares that Kevin will have to undo this error of getting the Feds involved. Kevin requests a town-wide curfew until they have time to further investigate the stoning. The mayor tells him to bring the motion up at the town council meeting, even though he’s got her support. (Yes, that sounds … promising.)

Lest we forget he is merely a man, the police chief waits in line like everyone else at the dry cleaner, looking for his lost work shirts. Surely he must have forgotten to pick them up. He has no ticket though, and the store owner grows visibly irritated with Kevin. (I’m sorry, do people in real life generally treat people of authority who have guns this shabbily?) On his way out Kevin runs into Nora at the back of the line. They do that awkward is-this-pleasantries/is-this-flirting thing again. When the chief is back at the station, he asks for Nora’s brother, Reverend Matt, to come in for questioning in regards to his alibi the night of the stoning.

During questioning the chief is reminded that he’s late for that town meeting. Man, this guy can’t remember his appointments or locate his laundry, and he runs the town. Dozens of angry residents are at the meeting to vocally oppose the idea of a curfew. The town council ultimately votes against it, and the chief takes it upon himself to visit the GR and bring them whistles to alert people if there’s trouble when they’re out doing their creepy standing-behind-you-at-the-Citgo-station thing (because this is the type of task that the Chief of Police definitely should do himself. This, and buy replacement baby Jesus dolls at the department store). He asks Meg where Laurie is and is met with silence. He personally stakes out the GR compound overnight (because, of course) and in the morning is awoken by a dog-walking neighbor who suggests that the chief not try too hard to protect the GR. Intriguing!

It turns out Patti whisked Laurie away to a neighboring town’s motel. When Laurie awakes the next morning there are normal, colorful street clothes for her to change into and a note to meet Patti next door at the diner. And it is in the diner that Patti speaks for the first time! She tells Laurie that everyone needs to take a day off, and encourages her to speak as well. Laurie stands firm on staying silent, even when the waitress arrives to take their order. Patti does all of the talking. She shares with Laurie how she previously brought Gladys to this same location when she noticed Gladys having doubts about her faith (things she had learned about in regards to the family that she shunned) and basically commands that Laurie stop returning to her family/her past. She states that “Doubt is fire … fire will burn you up.” She gave the same advice to Gladys. Then, in another of The Leftovers‘ many confusing moments, Patti excuses herself with a doggy bag. In a passing scene, we see her leaving the doggy bag full of … (your guess is as good as mine. Poop?) on the doorstep of an unknown person. The Doobie Brothers’ “What a Fool Believes” plays on the car stereo (yacht rock is in full effect in this episode and I love it). The name “Neil” is written on the bag though, so perhaps the bag is for Neil. But who is Neil? Armstrong? Patrick Harris? Diamond?

The next morning Kevin goes to Reverend Matt’s house. The reverend previously asked if he could be taken to the morgue to pray over Gladys’ body, which the chief denied him, since he was, at the time, a murder suspect in the case. But Kevin’s had a change of heart and brings Matt to the morgue. However, they’re too late, the ATFE&C (whose assigned agent has failed in returning any of the chief’s many voice mails) has already sent for the body to be brought in for their own review. When the ATFE&C agent finally does return Kevin’s call, they have an unspecific conversation where the agent alludes to how easy it would be for a team of his men to come to Mapleton and visit the GR, and then “everything can go back to normal. Just say the word.” It’s a call that you’d expect someone to receive from Tony Soprano, not a federal agent. Kevin refuses the offer (you can do that when it’s not the mob) and winds up getting tanked. On a beer run in town, he notices that the dry cleaner who is clearly hoarding his shirts is still in the store, so Kevin drunkenly and scarily persists until the dry cleaner lets him and finds his shirts. There’s a moment where even Kevin stops and realizes that he’s acting more like one of those wild dogs than he is acting like a man. But at least now he has his clean shirts for the rest of the work week!

When Laurie and Patti return home, they find Meg sitting among their fellow GRs, but this time she’s in all white and holding a sign, “I’m Ready Now.” There’s only a brief moment to enjoy this moment, though, as Reverend Matt is outside with some of his fellow worshipers, offering to eulogize Gladys and inviting anyone else inclined to come out and participate. Laurie doesn’t hesitate to leave Patti and Meg and head out the door. 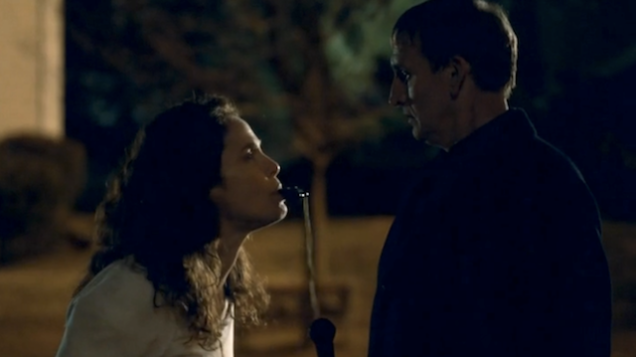 Is this it? Has she had a change of heart based on Patti’s lecture at the diner? Will she break her silence and join the reverend? Hardly. Laurie marches right up to Matt and begins to wildly blow one of the whistles directly in his face, startling him. (How the heck did she even know about the whistles, though, seeing how she wasn’t there when Kevin came by with them? Were they just in a box by the door with a note that read “Free Anti-Stoning Whistles”?)

Kevin returns home and finally, tearfully, tells Jill about the divorce, giving Jill some justifiable sads for once.

At the ATFE&C processing center (i.e., the crematorium) Gladys’ body is followed to its final fiery destination.

Patti was right when she warned Gladys that doubt is fire, and fire will burn you up.