Trending
You are at:Home»Television»‘The Leftovers’ Episode 6: ‘Guest’
By Claire Mangan on August 4, 2014 Television, The Leftovers

Hope is your weakness

This week on The Leftovers we were treated to another single-character storyline. This time we get to live a few days in the life of Nora Durst as she navigates the dark waters of interviewing citizens for her job at the Department of Sudden Departures while constantly attempting to come to terms with the loss of her own entire family. She goes from sitting with a client to lurking outside her children’s former daycare to mean mug her husband’s mistress (I guess she wasn’t lucky enough to get herself Raptured). And Nora has some other more peculiar rituals: she cyclically shops for new fridge and pantry staples: (conceivably) her kids’ favorite cereal, fresh eggs, juices; items that have clearly remained unopened wind up in the trash bin, replaced with newer identical items. 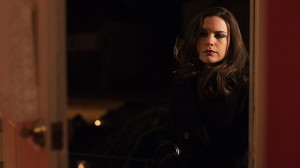 The next morning Nora arrives in court to make her divorce official. The judge points out that even if the departed are to return, the divorce would still stand. That’s fine with Nora. On the way out of court she runs into Kevin who reveals that he’s also in the midst of a divorce. Nora says that she’s heading to a conference in New York City and flippantly suggests that she blow it off and instead Kevin come with her to Miami. He politely declines the offer and they go on their separate, awkward ways.

At the Departure Related Occupations and Practices (DROP) office, she checks in with her boss before taking off for the conference. He takes this opportunity to ask her “What are you doing on number 121?” It seems as though all of the other DROP agents get varied answers from their clients on this particular Yes/No question in the handbook during their interviews, but Nora consistently gets “yes” answers. She scoffs that people are just answering honestly (we, the viewers, don’t even find out what the question exactly asks until later on in the episode) and he counters by asking her how SHE answered the question when she was interviewed. 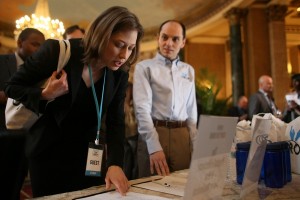 In the city, protesters and GR members abound outside of the convention hotel. Inside, at registration, Nora checks in and is told that someone else must have already picked up her name badge by mistake, so the clipboard woman offers her a generic “Guest” pass that still grants her full access to all of the events at the conference. Nora grows immediately agitated about this, since she is speaking on a panel and is a Legacy guest of the conference (a term reserved for people such as herself who suffered extreme loss on the day of departure), but nothing can be done and she reluctantly enters the conference. She immediately encounters a preppy party-boy type named Marcus who decides to solely refer to her as “Guest” and keeps prodding her to ask him what he does for a living. Nora doesn’t care to play the game and walks away, much to his astonishment. That wasn’t a pointless moment though, as Nora later meets Marcus and a group of partying conventioners in an elevator and is persuaded to join them. They are an uninhibited lot, taking pills, openly all hooking up with each other, and generally partying like rock stars in a hotel room. Marcus reveals what he does for a living: behind a curtained partition is a lifelike cadaver of Marcus; he is the dopy salesman of these dummies. Having taken one of their mystery pills, and no longer feeling the burden of being “Nora Durst: Legacy Honoree,” Nora herself has become uninhibited enough to mount the cadaver and make out with it.

Cut to Nora, alone in her hotel room, being jarred awake by a pounding on the door from the hotel security. They order her to collect her things; they are removing her from the hotel due to her misconduct in the bar. Nora insists that she wasn’t even in the bar and offers that it must have been whoever took/stole her badge. Unimpressed with her alibi (and obviously incapable of reviewing security camera footage to confirm that this is not the same person who was in the hotel bar earlier that night) they throw her out onto the street. In a moment of clarity Nora heads to the nearest copy center and has a fake convention badge bearing her name and Legacy status printed. She is immediately apprehended again by hotel security, but this time she gets to plead her case to the head of the team who skeptically agrees to go with her to the panel that she is scheduled to appear on to see if her impersonator is there. Thankfully that woman IS there, and when confronted about her identity by the real Nora Durst, the woman freely admits that she’s an imposter and starts spewing a bunch of conspiracy theory rhetoric at the crowd while she’s being hauled off by security.

A tall stranger that she noticed earlier at the hotel approaches her out on the street and asks if she likes feeling this way. He says he can prove that the author is a fraud if she comes with him. In a random apartment in a sketchy walk-up building the man says it will cost $1,000 for Nora to “see what happened.” Apparently the answer is on the other side of a set of black curtains. Nora pays the fee via Paypal on the mysterious man’s laptop and he brings her through the curtains to see Holy Wayne!

After he gives a quick but shockingly accurate estimation of who Nora is, he tells her that “hope is your weakness,” and asks if she wants to feel this way. She confides that no, she doesn’t, and they hug it out.

The next day we see Nora back in Mapleton. She seems more at peace with herself, still shopping but this time she doesn’t seem to be performing her purchasing ritual. She even smiles at the cashier. At home her bell rings and Chief Garvey is on her doorstep, asking to take her to dinner sometime. Finally, a normal interaction between these two abnormal souls! Nora happily accepts. Perhaps there’s some hope in Mapleton after all. Later, during a DROP interview with a client, Nora gets to Question 121 and we finally learn what it reads: “Do you believe the departed is in better place?” The woman being interview pauses, and then tearily replies “No.” There’s a moment of wondering if Nora is going to doctor the questionnaire and check the “Yes” box (perhaps she’s been doing that all along, since as Wayne pointed out: Hope is her weakness), but her pen finds the box next to “No” and she makes a deep check mark. Perhaps Nora is starting to feel this way herself.