My favorite episode is “Mypods and Boomsticks.”

The episode came out when I was in high school, and while I wasn’t exactly in a monetary position to have an iPod, I was on the bandwagon that believed buying an Apple-branded anything made you super cool. I wanted an Apple laptop for college and was generally obsessed with Mr. Jobs. This episode actually made me stop and think while I was laughing. Many episodes of The Simpsons actually make you do that, but at the time, this one hit so close to home! 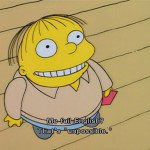 My favorite Simpson character is Ralph Wiggum. I can’t tell you how many times I made a weird slip up with my Eglidiersh and then said: “Me fail English? That’s Unpossible!”

Marie Heyman catches up on her TV on Saturday mornings while eating Fruit Loops. She then plays on her DS, reads some paperbacks of "Deadpool" and "Invincible Iron Man," by which point it's time to argue about women in pop culture and take a nap. She has written articles for FemmeForce.net and 140 characters under the handle @what_MH_thought. Check out her personal blog, IThoughtAboutit.com for details on how Marie got here.