I had no idea who Marvel’s Ant-Man was, and I didn’t initially care much for the character. He’s a super hero who can shrink, so what?  All I knew was that it was an Edgar Wright project, and I was already onboard because Mr. Wright can do no wrong. Not to mention, Simon Pegg was once attached to the lead role. Well, that all fell through due to differences in the vision of the film. After all was said and done, Paul Rudd was cast and Peyton Reed took over as the director.

Paul Rudd as a super-hero? Brian Fantana as a super-hero? The guy is extremely hilarious, but I never really envisioned him as someone who could fight crime. Hell, I couldn’t even see him winning a fight against the average joe. With roles in films like Role Models and I Love, You Man, it never crossed my mind that Rudd would be considered for a super-hero in a Marvel movie. Then the trailer came out, and it seems that he can pull it off. Rudd has some dramatic acting chops, and made a great effort to get into shape for the role. He could prove people wrong similar to Michael Keaton when he was cast as Batman in the 1989 film. 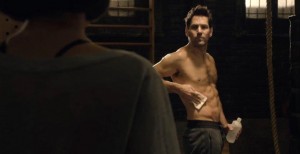 Okay, so Paul Rudd is Ant-Man, but who the hell is Ant-Man? Rudd plays Scott Lang, a con-artist that becomes a hero thanks to his mentor, Dr. Hank Pym, who’s played by Michael Douglas. In the comic books, Dr. Pym was the first Ant-Man. Scott Lang steals the Ant-Man suit from Dr. Pym in order to save his daughter from a heart condition, and eventually becomes a full-time hero. Down the road, he even becomes an affiliate of the Fantastic Four, and also becomes a member of the Avengers. The suit gives Lang super-human strength, the ability to talk to insects, and the ability to shrink down to the size of an ant (duh).

Scott Lang is a very unlikely hero, as he’s a con-man trying to find redemption. Rudd seems to be the perfect fit, as he’s capable of doing anything and still manages to be likable through his sarcasm and charm. Did I also mention that Rudd helped in re-writing the screenplay, along with Adam McKay? Although, they do mention that the bones of the script is still very much Edgar Wright and Joe Cornish. So, it seems that four solid screenplay writers have worked on the script. Yes, it could be a bit of a mess, but it should definitely be entertaining.

The motion-capture effects of the scenes when Ant-Man is tiny as hell should be interesting. We’ve definitely come a long way from the technology of Honey, I Shrunk the Kids. Judging from the teaser trailer, his fight scenes look to be fresh and different; it’s always a good thing when you can find different ways to beat up baddies, as the old one-two punch can get…well, old.

I can’t help thinking about whether or not Ant-Man will appear in a future Avengers flick. Paul Rudd and Robert Downey Jr. sharing a scene or two has the potential to be hysterical. Before any talk of that, we have to see how Ant-Man unfolds.