Trending
You are at:Home»Television»‘The McCarthys’ Review: ‘The Ref’
By Lenny Burnham on January 30, 2015 Television, Television Reviews 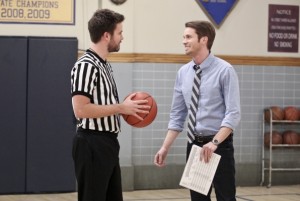 This week’s The McCarthys was about Ronny dating a handsome guy. They know how to get me on board with their episodes.

The handsome guy in question was Doug, a referee played by Zach Cregger (Guys with Kids). Since Ronny comes from a family of coaches, they all hate referees, so Ronny has to sneak around. They do a lot of fun stuff with this idea, like Ronny and Doug getting so into their forbidden romance that they talk to each other in a preacher’s daughter/boy-from-the-wrong-side-of-the-tracks manner, and Marjorie getting suspicious because she notices Ronny has rearranged the pillows in his living room in “a suggestive manner.”

The episode became a little muddled when they started really pushing the family’s distaste for referees as a metaphor for real prejudice. Ronny accuses them of being “ref-ist,” Jackie says she’s not like the rest of her family when it comes to “judging people by the color of their shirts,” and Arthur tells Doug “you all look the same to me.”

Fortunately, this layer didn’t totally derail the episode, but all of these lines felt artificial and really unnecessary since the straightforward forbidden love conflict was already working throughout. It felt especially tone deaf to have all these jokes around the idea of being “ref-ist” when they still haven’t had Ronny actually date a guy who’s not white. This is as good a time as any to mention again how much I want Keegan-Michael Key and Kumail Nanjiani to guest star on this show as love interests.

“The Ref” is still overall a really fun episode. Because of the weird prejudice metaphor, there were more jokes than usual that just didn’t land. But there was still a lot to like. I enjoyed Doug coining the term “Zebra Fever” to describe people who date referees experimentally and Ronny accidentally letting slip to his dad that Doug calls him Rhonda.

The best part of the episode was the scene that brought the main plot together with the B-plot about Katrina worrying that Gerard is cheating on her. “The Ref” wasn’t my favorite The McCarthys episode, but there was still a lot to enjoy.