Trending
You are at:Home»Movies»Movie Reviews»‘Fight Like A Girl’ Strikes Plenty of Profound Notes
By Tyler Birss on May 8, 2015 Movie Reviews, Movies 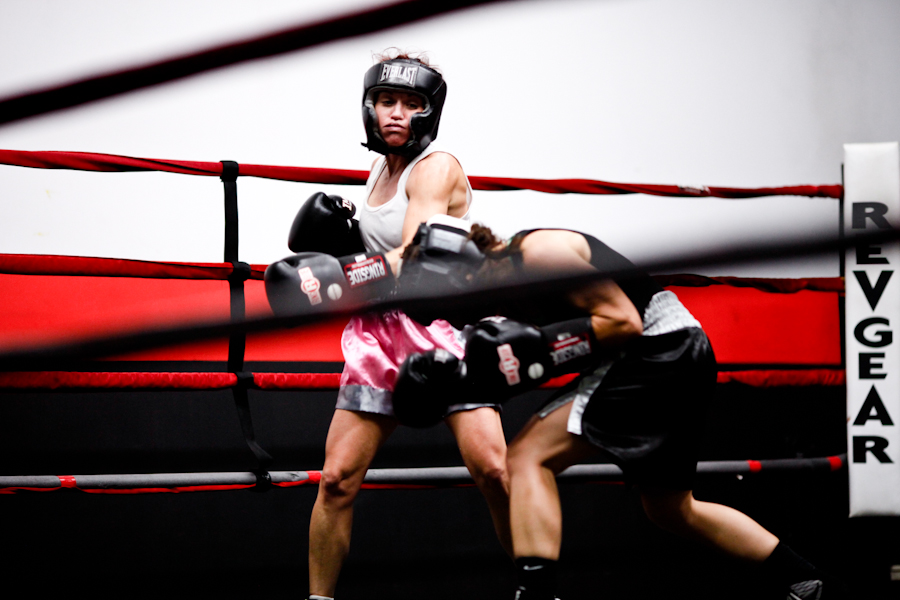 Fight Like A Girl is a boxing documentary that delves into the misunderstood world of female fighters. Powered by boxer and filmmaker, Jill Morley, this feature is full of ambition and insight. The national discussion on boxing usually focuses on Floyd Mayweather or other top-notch male fighters. Rarely do women receive mentions when it comes to this vicious, assaultive sport. Props to Morley on entering a world the public knows little about.

For Morley specifically, she reveals her difficult journey. Her family members question why she boxes, and her brother directly discusses her potential depression and lack of identity growing up. Other fighters featured in Fight Like A Girl also had childhoods with their share of tribulations. This appears to be a common result for countless boxers. It’s not a sport one necessarily practices by accident. A prospective boxer might randomly start fighting, but staying in this violent game requires dedication. And the roots of that dedication are sometimes a mean streak that emerged earlier in life.

After putting out the roots of Fight Like A Girl, Morley steps back and focuses on other fighters. These include Kimberly Tomes, Susan Merlucci, and Maureen Shea. Their stories are interwoven through Morley’s during the documentary. Tomes openly describes the prejudices she’s faced as both a woman and a woman of Asian descent. An assault from another man is part of what prompted her to start boxing. Like Tomes, Merlucci and Shea also experienced doubt when people realized they were fighters.

Jill isn’t afraid to be honest to a raw degree in Fight Like A Girl. Her past included a bout with stripping, and a knack for authoring plays. It sounds unusual to have a playwright/boxer, but that’s the type of dynamic personality Morley offers. Morley’s ambitious personality is all the more notable considering the abuse she suffered at the hands of her mother. Her brother says such abuse was common in that time period, but states it should have no place in society today. Morley’s father admits to seeing his wife hit Morley rather viciously on one occasion.

This background leads to a post-traumatic stress disorder diagnosis. Morley disagreed with the psychological finding when she found out. Within here lives a theme of Fight Like A Girl, however. These girls don’t merely fight inside the ring, they also engage in legendary bouts on the outside. Kimberly has dealt with racism. Morley has been subjected to familial abuse, while Shea suffered because of a highly abusive boyfriend. It’s no coincidence that these women refuse to quit, refuse to stop fighting. This is especially hard for Morley when she feels improvements aren’t coming soon enough.

All of the boxers in Fight Like A Girl express a desire to expand the popularity of female boxing. As Morley states in the documentary, even professionals such as Shea experience difficulty financially surviving as a full-time fighter. This is indicative of the have and have not nature of the sport. For every Mayweather, there are countless male fighters struggling to get by. This is amplified for women in the ring since they receive even less pay than their male counterparts. ESPN and other outlets love to cover the worldly famous fighters, they rarely expose boxing’s underbelly.

Merlucci continues this narrative. With no life savings or assets, surviving is a daily struggle on top of having a daily training regimen. Even the Golden Gloves, a competition discussed throughout Fight Like A Girl, offers no monetary reward for the winner. That truth alone summarizes the primary issue of female boxers. If these individuals are willing to pour their beings into a sport, that sport should present a greater return.

Melissa Hernandez is another important figure in Fight Like A Girl. A former world champion, she’s one of the rare female fighters with something of a following. Hernandez also makes her name training fighters, Kimberly included. Kimberly praises Hernandez for her effective coaching style. Behind the camera, Morley digs deeper with each individual. For Hernandez, Morley is able to find out that even though the former champion has notoriety, she doesn’t even have a car.

One of the more profound scenes in this documentary is when Morley meets with a therapist. Victoria Britt, the individual assisting Morley, examines the role of the nervous system in our lives. According to her, since our minds have a sense of time but our bodies do not, we may physically be past traumatic events from earlier in life, but we aren’t psychologically. Morley was helpless in childhood when she was beaten. Britt also states that victims of child abuse often freeze during the trauma, unable to truly rebel or properly process the events. For Morley, past abuse remains a huge part of her current journey.

The audience learns to praise Morley, however, for her strength and courage. A similar sentiment applies to every figure in Fight Like A Girl. Kimberly continues to improve under Hernandez’s guidance. Morley and Shea advance in their careers both inside and outside the ring, including a world title for Shea. Merlucci, in one of my favorite moments in the movie, wins a pair of Golden Gloves. Hard work does apparently pay off.

Because of Fight Like A Girl, these women have been given a voice. It’s a voice rarely heard in the male-dominated sports world. And the audience is fortunate to hear these necessary insights, these powerful words and stories in a world crippled by inequality and misunderstanding. Major praise should be given to Morley for creating a documentary that isn’t just great, it’s groundbreaking.