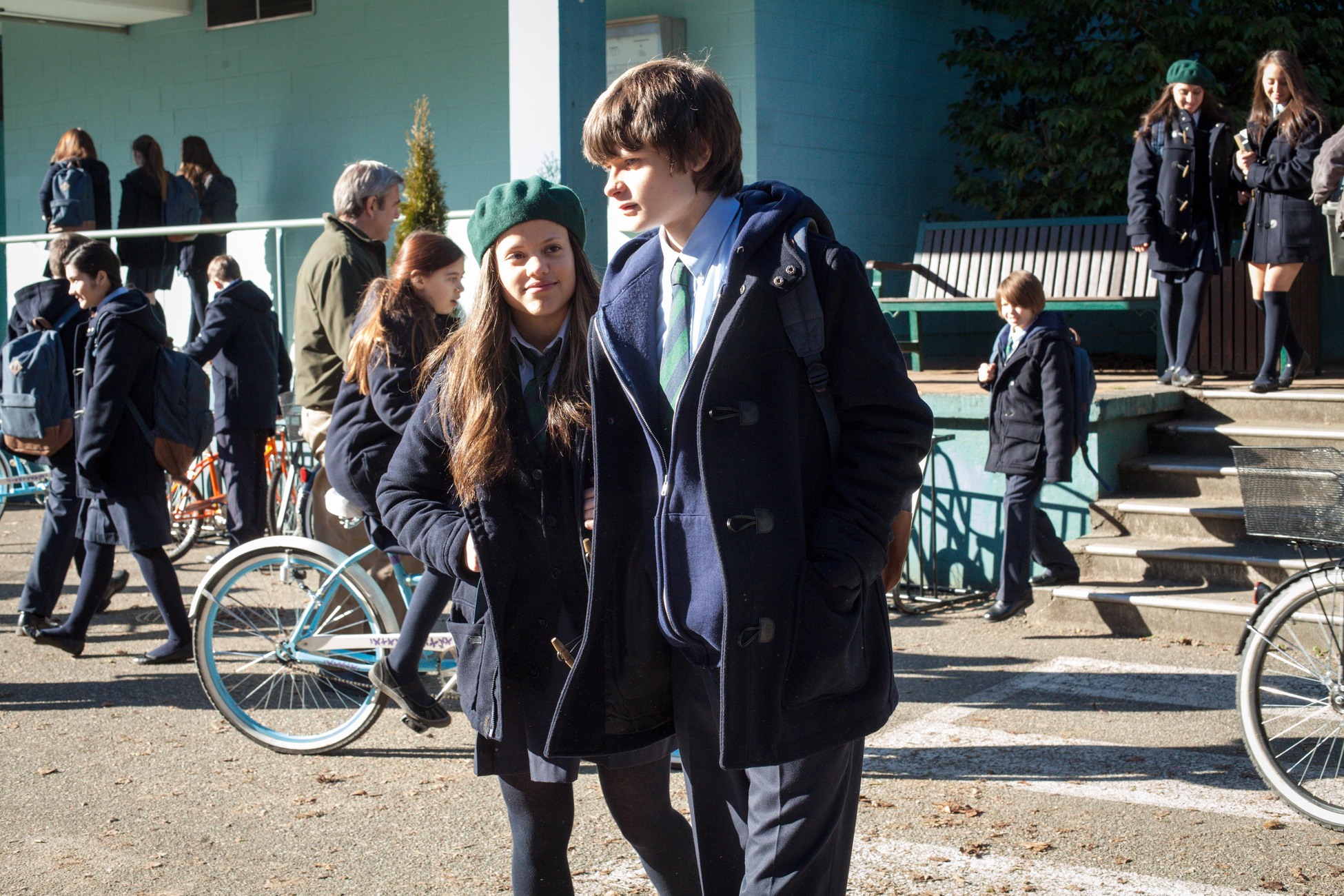 Wayward Pines continues its uphill battle from burying itself in absurdity halfway through the season. For the second straight week, the Fox series recaptures shreds of what made the show appealing prior to episode five’s odd plot tailspin. The recent airing begins with Burke and Theresa discussing their immediate plans. Matt Dillon’s beaten protagonist appears ready to throw in the towel as his wife remains prepared to fight. On Burke’s part, is this a truthful surrender or merely a mask hiding an ulterior plan? Only the most gullible of Wayward Pines watchers could actually believe Burke is done fighting. He and Kate reconnecting for some revolutionary madness has been a potential story trajectory all season, one I maintain will come to life before this chapter closes.

In his sheriff’s office, Burke is interrupted by a cheery Pam. The agent wants control of the town’s surveillance. The scene cuts to the children of the future. Cracking away his foundation that was built in Seattle, Ben appears fully invested in his Wayward Pines persona. He’s already creepily embracing the whole “don’t talk about the past” idea. Hopeful of a parent/teacher conference or any kind of tour, Theresa is blocked by Mrs. Fisher. Ben has access inside school grounds, his mom is left flapping in the breeze. May the lord have mercy on us all if Ben and his generation are deemed the only hope for mankind.

Burke meets with Franklin, a local shopkeeper. There’s a degree of comedy in seeing Burke display the sheriff’s badge while quoting some of the town’s go-to phrases. In a not-so-subtle manner, Burke basically asks the worker for knowledge of a certain bomb in his trunk. Meanwhile, Ben’s crush, Amy, takes center stage alongside her love interest in the classroom. The topic? Procreation. As Mrs. Fisher throws a bone Ben’s way, the mop-haired youngster gazes in relative horror. His discomfort ends when his teacher mercifully allows him to sit.

Pilcher and Pam discuss the future while working in the hospital. As this brother and sister duo attempt to implement their project even further, Burke and Kate’s husband, Harold, meet. Burke wants to know why a bomb was placed in his car, a reasonable point of inquiry we’d all likely have given identical circumstances, and an interrogation ensues. The audience can see two sides of Burke here. On the surface, he’s attempting to convince himself that Wayward Pines offers no escape. The fate of all is finalized. Deeper within, it’s a given that Burke has to maintain a desire to flee this dreaded community with his wife and son.

Theresa still has questions about her job. She’s become quite the investigative mind, even if her efforts usually end without much substance. Burke and Kate privately get together to discuss the whole bomb situation. The formerly missing agent reveals how a particular group of Wayward Pines citizens have been secretly meeting over time to open up their truthful identities. Sounding like Pilcher, Burke drops his recently acquired knowledge on his past fling. This provokes a point of pondering. Should these potential revolutionaries escape a flawed but known world for an alternate one that’s completely unknown?

Amy uses Mrs. Fisher for advice on how to proceed with Ben. Somehow, some way, the goofy teen has won over the heart of his classmate. Score one for the underdogs. That is, count one in Ben’s favor if this affection is genuine rather than part of a sinister plan. His father is less love-struck at the moment, effectively ending Kate and Harold’s plan, or at least attempting to do so. Kate isn’t accepting setbacks, though. She even takes off her jacket in a method to instill her seriousness! Well played, M. Night Shyamalan, well played. Excuse my sarcasm, but episode five is still a bitter enough topic to where I’ll take my shots when possible.

Now sporting a misplaced hat, Kate and Theresa meet while talking in whispers. This will forever be remembered as the “secret meetings” episode. A mini-intervention follows between husband and wife, Theresa doubting Burke’s newfound skepticism about not being able to leave Wayward Pines. Leaving school, Amy devises a plan to sneak into the woods with Ben. Harmless youthful innocence or a fateful set piece? Hold on with that for a little while. Burke intervenes, intercepting his son in anticipation of something on the horizon.

The energetic sheriff catches the revolution in progress. Burke asks Franklin to disarm the bomb, much to Kate’s dismay, and the altercation escalates to Burke turning his gun on his former lover. Their plan to blow up the wall failed on an epic scale, resulting in Kate and her comrades being locked up. On second thought, upon Burke’s closer inspection, perhaps this off-the-grid plan wasn’t such a failure. It appears that Kate was simply creating a distraction as Harold had involvement with the real bomb elsewhere. It remains a topic of intrigue if Burke will ever snap out of his daze and join the rebellion.

As this Wayward Pines installments nears its end, Ben and Amy hop into a delivery truck. One problem: the vehicle may or may not explode during any moment. With calculation, Amy seduces Ben as ominously soft music plays in the background. An unintentionally funny spot occurs when a garbage can (at least that’s what it looked like) is placed in front of Burke’s sheriff car. Any random humor halts once the truck explodes, making Amy and Ben bloody in the process. Standing in shock, Amy and Burke watch an unresponsive Ben on the ground.

Why did this episode work? Less Pilcher, less draining science talk, and more of Burke in action. Stick to what works, Wayward Pines, and don’t deviate into absurdity again.