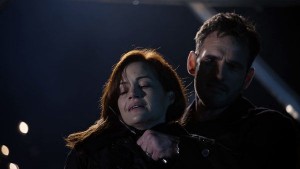 Wayward Pines is nearing its end with this penultimate episode signifying us being one step closer to a necessary conclusion. There’s been baffling, unsatisfying twists and turns, on top of a blatantly strange shift into scientific territory. Nevertheless, here I am writing, here you are reading, and for some inexplicable reason, we continue to watch. This is likely the result of wanting to see the show through and witness whatever remaining madness waits ahead.

Burke has Kate by the neck at a reckoning. Will Wayward Pines allow him to slash the former agent’s throat or not? The scene shifts to aberrations feasting on human flesh before examining an abandoned truck. Burke shoots the tires out of a car to fire on a creature crawling under it. We then see Kate in a jail cell alongside other dissenters, creating confusion right from the jump of this episode in what has to be another painfully overused flashback.

The people want retribution over Ben’s bombing incident. Burke is torn by his commitment to his son and loyalty to Kate. For about two or three episodes, Burke has been stalling with indecision, authentically unsure about how to play the game in front of him. An interrogation of Harold ensues. Burke is able to pull out valuable information during this cat-and-mouse scenario. As Burke sorts out the communal mess, Theresa visits with Pam in the hospital. Ben remains there while recovering from the explosion.

Burke gives Pilcher a list of 14 people, the one acquired from pressing Harold. It appears that these individuals have been removing their chips in the process of going off the grid. Meanwhile, Amy takes a downhill turn in the hospital. Her brain is experiencing swelling. Ben has already become a martyr-like figure in the community, yes he still has a pulse, but his close proximity to death is enough to instill anger in Wayward Pines. Remember, the youth have been deemed the future, making Ben and Amy be seen as valuable figures.

Mrs. Fisher accompanies Ben in the hospital. She shows him a growing rally outside on behalf of the bombing victims. With encouragement, Ben speaks to the masses. What a sorry, pitiful leader. He does his dearest, that can’t be denied, but Ben is hardly a powerful figure capable of commanding a show, much less a radical movement. He also calls out his dad in the process. The townspeople are furious with the fatherly Burke’s recent decisions, and this should put a certain level of violence into motion.

The sheriff’s office is stormed by youthful radicals. They confront the secretary as the power balance of Wayward Pines hangs in the balance. Kate attempts to talk one of the youngsters down, Jason, who grabs a gun. He’s been brainwashed by bogus ideas, influenced by ridiculous town nonsense. He smacks Kate hard with the weapon before doing the same to Harold. Perhaps this development would have greater power if Jason and his comrades were introduced earlier in the series. They weren’t, so this scene lacks the mastery it seeks, although Jason’s execution of every prisoner but Kate does stand as the show’s biggest moment.

Why didn’t he gun down Kate? Because Burke eliminated Jason before the misguided fool could deliver a final blow. Kate is understandably shaken by the eruption of violence. A major part of me wants Burke and his former lover to squad up together and go after the scum of Wayward Pines, problem being that Ben and Amy’s victimization points to Kate as part of that scum. Not in my eyes. The problem is Pilcher. Mrs. Fisher is another. To a degree, so is Pam.

Theresa visits the sheriff’s office, stating that she has something Burke and Kate need to see. A video is played of Adam, one of Burke’s coworkers back in the real world. The footage cuts once it appears that Adam is confronted by others. The scene cuts when Kate mentions how a reckoning will occur at midnight.

Burke tells Pilcher that he wants to reckon Kate. The scientist predictably agrees with the tactical move, but the audience knows Burke will never shed blood of the innocent. Yes, she played a part in what happened to Ben and Amy. This doesn’t make her the enemy. She’s simply been caught trying to rebel in a strange, unsettling world. We then return to the scene shown at the episode’s beginning with Burke having Kate by the neck, knife in hand. Instead of destroying Kate, he turns the tables on the devious Pilcher.

Take that, Pilcher, you dirty son of a bitch. Burke reveals the truth to the Wayward Pines townspeople, confirming to the audience that Burke’s recent “playing of the game” as sheriff and loyal citizen was merely a hoax. Such was expected. Mrs. Fisher intervenes to interrupt the revolution. Another AHHH YEAHHHH moment happens when Theresa slaps Mrs. Fisher in the face. This can easily be stated as my favorite part of the season.

A blackout takes place, one apparently from the hands of Pilcher. Sensing the oncoming revolution and powerless to control it himself, the scientist appears to be on the verge of releasing the aberrations into Wayward Pines. Major momentum was acquired as this installment neared its climax, setting the audience up nicely for next week’s finale.