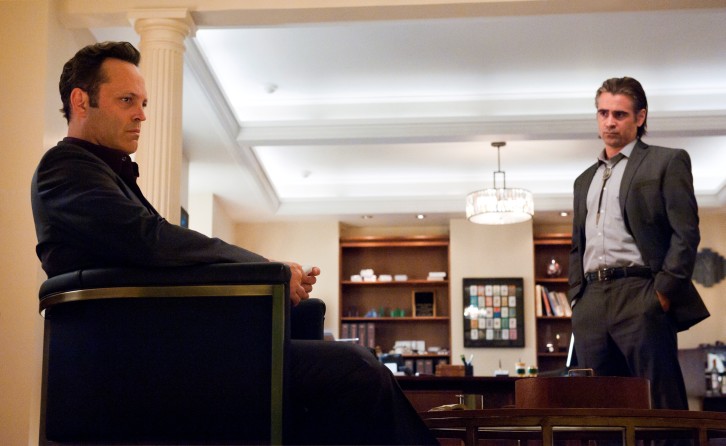 True Detective has now crossed the halfway point of Season 2. What do we have thus far? Extreme quality television with star actors, albeit a level of quality that has been hindered by a frustrating pace and a less than perfectly constructed storyline. We’ve seen a slew of freeways, unsettling animal masks, and finally, after last week’s installment, an eruption of violence.

Episode five picks up following that bloodshed, only briefly, though, before showing Frank and Jordan engaging in couple’s silence. If you were attached to Colin Farrell’s facial hair in any way, avert your eyes from my next sentence. Ray has shaved his mustache. Tragic, I know. The recently shaved figure is then off to collect money from illegal immigrants on Frank’s behalf. In a moment of absurdity for Ani, she finds herself in a rehabilitation or counseling session of sorts. “I really like big dicks,” is her sarcastic way of addressing the situation, also discussing “girth” in the process. Nic Pizzolatto and his obsession with sexually charged dialogue, am I right?

A note worth inputting is True Detective‘s decision to move forward in time. Ray has resigned, Paul has been awarded a medal, and Ani’s session probably wasn’t her first.

Paul and his people meet with the woman accusing him of sexual wrongdoing. The True Detective audience remains unaware of the actual truth concerning the incident. My gut points to Paul’s innocence, an understanding based on his stern denial of the event and the unlikely prospects of Taylor Kitsch’s character going out of his way to engage in a heterosexual relationship. We then have Frank verbally destroying a couple of small-timers, demeaning them with witty insults. His next encounter is with the mayor.

Ray and Alicia are at legal odds. The rape of Ray’s ex-wife is brought into play, a tactic set out to prove Farrell’s character isn’t the biological father of the child. Alicia simply doesn’t want Ray in her son’s life. There’s also an abundance of Caspere talk in this True Detective episode, an individual I’ve previously spelled as “Casper” in past reviews. That was because it seemed to be the most common usage found online, but it now seems that “Caspere” is more fitting, thus my change.

Paul tells his mom of his decision to marry. She completely opposes the life choice, making it easy to see how this devilish woman has likely criticized his every move since birth. Paul reaches his angriest point in True Detective when he realizes his mom has used his $20,000 brought home from Afghanistan. She lashes out in response by stating that Paul ruined her career before belittling him for his sexual orientation. The scene between Paul and his mother is one of the most intense, well-acted points of Season 2.

Ani is in the field on a missing persons case. However, we learn that Ani has been severely demoted to a low level law enforcement position. Ray goes into a introspective rant in what we assume is a message to his son. A strong plot point for True Detective is Ray’s resignation because it allows him to be even dirtier, even bolder, in his operations with Frank. As he cruises the city and does recon work, the show begins to recapture the powerful vibe it presented last season. Make no mistake, we’re not functioning at a Rust Cohle level, but this fifth showing signifies a major step forward in terms of rhythm and cohesion.

A recent Entertainment Weekly article questioned whether or not True Detective will find its groove, and I would argue that it now has. Continuing the forward development, Frank is gravely offended when Jordan calls him a “gangster.” His decision to run girls, basically becoming a pimp in the process, is believed to be a necessary option from Frank’s standpoint. It’s one that has drawn a line in the sand with Jordan. She drops the bomb that she’s had operations in the past and doesn’t feel committed to having a child anymore.

Paul and Emily have a dinner with the detective’s future mother-in-law. She is grateful that Paul is off his motorcycle and in a suit, but the audience knows Paul would prefer the bike. His relationship and career movements are being made to please others. Before the season ends, Paul will surely reach a snapping point where he’s unable to separate these worlds.

Partnering up in an off the books fashion, Ani and Ray meet for a drink. Ani reveals that a state senator was spotted at a shady party, the type of hangout Caspere frequented. Here is the most juicy, hopeful possibility for Season 2 of True Detective. We’ve had animal masks. There are missing girls. Cryptic references to the Yellow King have even been placed in the mix. What’s my point? We still might enter the clutches of depravity, a capacity for darkness that few shows can match. There’s a kidnapping via powerful people, sexually motivated evil sort of wavelength hovering below the surface right now.

Paul and Ani meet with Ray. An attorney offers Ray the chance to get his son back if he helps discover who killed Caspere. Again, this is where the series needs to go. I sense a confrontation with men in animal masks and a descent into the kidnapping angle on the horizon. Ray also learns that the man who raped his wife has been caught. His DNA matched with other victims. Hasn’t it been subtly believed all season that Ray eliminated the man he thought raped Alicia? The horror on Ray’s face implies that he has innocent blood on his hands. Perhaps Frank had Ray wipe away someone Vaughn’s character needed out of the picture.

This is it, this is where Season 2 of True Detective becomes fully worthy of the loyal fans who support the series. We’ve arrived at a point of darkness. We don’t want the sophisticated criminal, railway subplot that dominated early on. No, we crave the stellar combination of phenomenal acting coupled with a dedication to the extremely real evil present within humanity. Most shows either sensationalize or shy away from this dreariness, not True Detective. The subject matter is grim, sure, but the realistic nature of what’s shown makes it more refreshing than vomit-inducing.

Ani uses her sister to acquire access into one of these strange powerful people parties. As she and Paul drive, it feels like they’re on a collision course with those responsible for killing Caspere. Meanwhile, Ray and Alicia discuss the serial rapist who victimized her being caught. Alicia rightfully wants to know the real child’s father, and that prospect doesn’t seem strong for Ray. We don’t receive confirmation that Ray murdered the wrong guy, but when he tells his ex-wife that Frank set him up, what we assumed earlier is implied: Frank likely used Ray’s anger to his advantage.

Ani and Paul are following birds. The bigger picture is a smell large enough to make them draw their guns in suspicion. In the wilderness, they encounter a shack that has the makeup of a torture chamber, a room of sacrifice. There’s dried blood and a chair designed to erase the mobility of the hapless victim. Perhaps a video was made, one like Ray crossed before he was shot, one similar to the various installments Caspere religiously watched. The creators of these videos encountering Ray and his people would be a wonderful plot point.

Frank hears banging on his door. He loads his gun before answering. Predictably, it’s Ray, and he states that he and Frank need to talk. A fitting ending point for an excellent episode, easily the best of the season. With three showings left, we’re on the path to depravity. What’s more, Season 2 has arrived, and skepticism regarding the show’s level of quality has been eradicated.