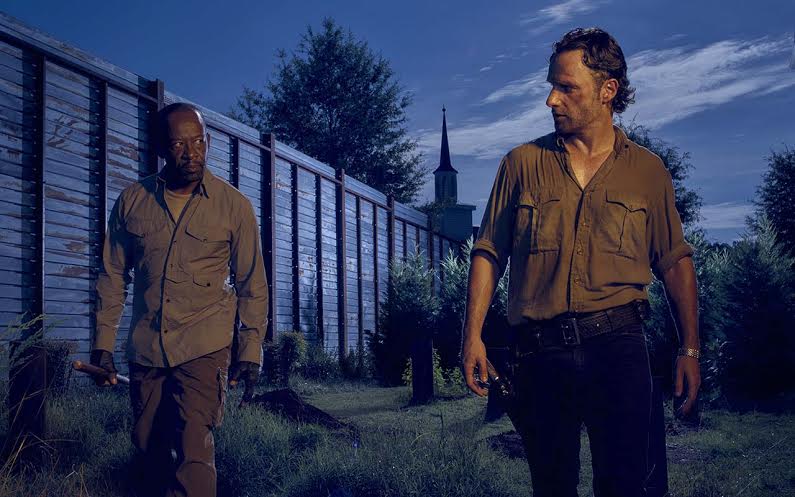 For many people the month of October means getting excited about Halloween, pumpkin spice lattes, and finally being able to break out those precious UGG boots again. For me and those that are like minded, though, it means THE WALKING DEAD IS BACK. The time between seasons of The Walking Dead seemingly stands still while I impatiently await more zombie-killing perfection. Rick, Daryl, and the gang are back, and I couldn’t be more excited.

Season six premiered this past Sunday night, and before I go too in depth into my review, I would like to share some statistics that I will be keeping a running tally of for the remainder of the season. First I will be keeping a Walker Kill Count to see which character racks up the most zombie murders over the course of the season. It would be entirely too difficult to keep track of every character, so I chose just to record kills from my favorite characters or those from whom I assume we will be seeing the most action. These numbers aren’t exact, as it’s hard to keep track of everything going on at the same time, but I did my best. If you catch any discrepancies and feel the need to tell me about them, don’t. Here is the count after episode one:

The other thing I will be keeping track of is how many times Abraham has the best mustache of the episode. So far it’s one, and I don’t see anyone ever beating him. Seriously, it’s like mustache art.

You’ll notice a new name on the Walker Kill Count list: Heath. He is a The Walking Dead resident of Alexandria who was out of the community on a scouting trip during the time last season took place in. I included him on the list because he killed a significant amount of walkers, and also because I like his The Walking Dead character a lot. He is a bit of a sarcastic asshole, so naturally I relate to him in a big way. I hope he stays relevant and keeps the sarcastic one-liners coming.

This season premiere showed that the producers and show-runner of The Walking Dead aren’t afraid to do a little experimenting with style and cinematography. Rather than having a straight up linear story like normal, this episode uses flashbacks to tell its narrative. The flashback scenes are all black and white with serene background music to accompany them.

Rick and the group discover a massive horde of walkers near the community that they decide need to be lured away. The flashback scenes are used to show the planning of the mission, while the present scenes show the plan being executed. It’s a positive decision that they’re willing to try new ways to tell their story. This method was effective in episode one of The Walking Dead‘s new season. For a show that can pretty much do no wrong, why not get creative?

The most interesting dynamic of this The Walking Dead episode, and I’m assuming the rest of the season, is how Rick and Morgan will interact now that they are back together again. Although they have been friendly enough so far, I don’t see a bromance developing for these two again. Morgan seems to be fundamentally against just about everything Rick stands for, but still thinks there is some of the old Rick in there somewhere. I, however, am not convinced. Rick has been forever changed by the world they live in, and he will always do what he has to do to survive, whatever the cost.

The plan to lure the horde of walkers away from Alexandria was Rick’s idea, so naturally it is what they end up doing. He is essentially the leader of the community because, though Deanna is in charge, she agrees with just about everything Rick wants to do. She is pretty much in his debt after he killed her husband’s murderer in true Rick-like fashion.

The mission to lure the zombies down the road away from Alexandria is all going according to plan until an extremely loud horn or alarm starts going off from the community itself. This prompts the horde in The Walking Dead to change direction and head straight for the community that Rick and friends now call home. The unanswered question is who set this alarm off? Was it a disgruntled The Walking Dead resident of Alexandria, or did one of the Wolves that we have yet to meet somehow sneak in and trigger it? I don’t know the answer, but I can say that this is some really bad news for our characters. Daryl better warm up his cross-bow because things are about to get messy.