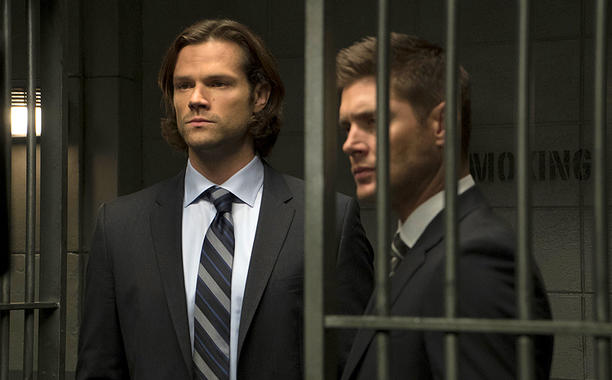 This week’s episode of Supernatural was not one of my favorites, and I’m probably going to do more complaining about the show than I ever have before. My biggest complaint is that they got away from the monster of the week style episode they’ve been using the past couple of weeks and went back to a normal story-arch focused episode. While these can be effective, they just pale in comparison to the work they’ve been putting out in recent weeks.

They try to keep some of the fun writing in these episodes when they can, such as Cas watching crappy daytime television and Dean deciding to recommend Game of Thrones instead. These moments are few and far between, however, and it makes the ones we do get seem out of place.

Even the main storylines we get this episode aren’t appealing. First of all, they decided to bring back Metatron this episode, which I’ve been dreading since the beginning of this season of Supernatural. There just isn’t too much more they can get out of him as a character, but they try anyway. Running around as a human has caused Metatron to do his best Jake Gyllenhal impression and run around at night filming horrific crimes and accidents.

This Nightcrawler routine leads Castielle right to Metatron, where he proceeds to beat his ass for information on The Darkness. After some coaxing, Cas learns that Amara is actually God’s sister. WHAT? This was actually quite surprising and made it so this episode wasn’t a total loss.

I predicted after episode one of this season of Supernatural that Amara was actually God, but apparently I was wrong. Not a bad guess, though, and I was pretty close, right? I’ll still stick to my prediction that God will be revealed to us at some point in this season.

Big reveals aside, another storyline I disliked this episode was the whole Crowley playing daddy thing. He grounds Amara and locks her in her room, reads books about raising a daughter, and makes a lot of “new dad” jokes. I see what the writers were going for, but it didn’t come across as funny. It seemed out of place over anything else, and went against the more ruthless Crowley we’ve seen of late.

Crowley definitely regrets being a dick father to Amara when she proceeds to kick his ass when he tries to kill Dean. She is definitely more powerful than Crowley now, which is scary considering she’s only about 16 and not at her full potential yet. She also has a weird, semi-creepy thing for Dean, which is either going to help him or hurt him in the future. I’m not too sure yet.

This episode of Supernatural also raises a few questions about Sam. Apparently he’s trying out some new “no kill” policy when it comes to demons, which I don’t understand. It might have something to do with his praying, or his visons, but it’s weird either way. They’re demons, just kill them like you’ve been doing for about eight seasons.

Sam does have an intense vision at the end of the episode of a cage being suspended by chains in the middle of an empty void. My guess is that this is Lucifer’s box, and Sam is getting some weird visions from it because he is Lucifer’s vessel and everything. I also made the prediction that we would see Lucifer or Michael again this season, and these visions may be hinting towards that.

As much as I disliked what this episode of Supernatural had to offer, it still had some big reveals, and created some interesting questions for us to speculate about. Amara is still one of the best baddies the show has had in years, and they seem to be taking her character in the right direction. I’m excited to see where the rest of the season takes us, as long as it’s far away from more episodes like this one. That being said, Supernatural is still a quality show and off episodes aren’t going to make me stop watching it.