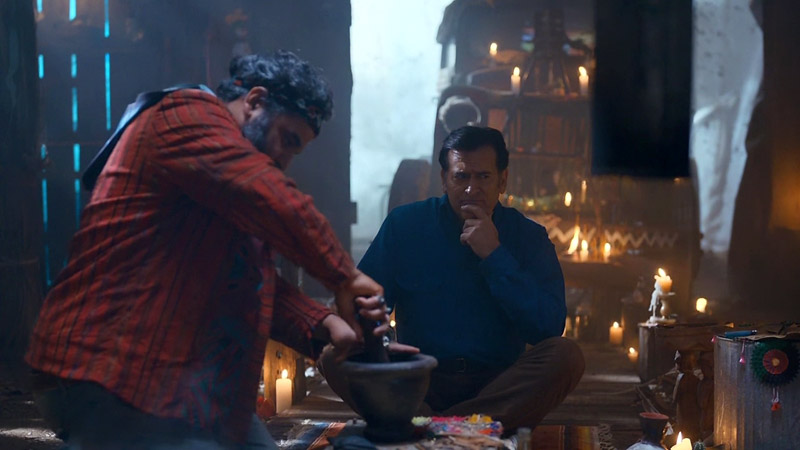 Ash vs. Evil Dead delves deeper into the character of Ash Williams in “Brujo.” Fresh from the chaos they left behind at the Books from Beyond shop, Ash and company go to Pablo’s uncle’s house for some hard answers.

Director David Frazee quarterbacks this episode and does a tremendous job, especially working with the thirty minute runtime. The entire show feels like one big sequel to the Evil Dead trilogy, and that may be a good or bad thing depending on where you’re sitting. Frazee balances the humor, mystery, and horror well in this episode, and the show overall continues to pump out a solid storyline. There’s plenty of forward momentum, and the pace is very shoot-from-the-hip in style.

Bruce Campbell has a ball in this episode, as he looks inside himself with the psychedelic drink concocted by the Brujo, which means male witch, who is Pablo’s uncle. The hallucinogenic trip is where the episode shines, as we are plunged into the mind of Ash. His quirky, near-empty thoughts of Jacksonville are sadly comical. After having some words with his lizard Eli and the Brujo within his own mind, he eventually has a lightbulb moment to shoot first and think never: vintage Ashley J. Williams.

Lucy Lawless gets a little more screen time in this gem as Ruby, and we get to learn quite a bit more about how she ties in to Evil Dead 2! Ruby is the sister of Annie Knowby, and the daughter of Professor Knowby and his wife Henrietta. Yes, you could’ve figured that out somehow, but the episode sets it straight. Ruby teams up with Amanda, who is steadily the most boring character on the show, and set chase for Ash, seeking vengeance.

The demon from the previous episode, Eligos, has taken Kelly’s body hostage, which leads to more juxtaposition between her and Ash. Pablo, trying to be the best sidekick a man could ask for, is working on a mechanical hand for Ash, which seems to be a more plausible construction than what Ash created in Army of Darkness.

We still have yet to see Ruby and Ash clash, but it should be a nostalgic moment for fans of Xena: Warrior Princess. Wouldn’t it be awesome if all these events led back to the cabin for a big show down? Not too many people would be disappointed about that, and it seems as if that’s where it’s going.