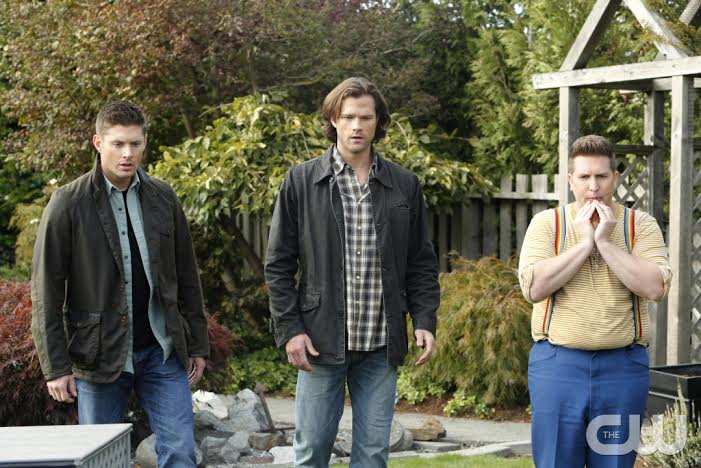 Well, it turns out that imaginary friends in the world of Supernatural aren’t so imaginary and are actually a being called Xana who are tasked with hanging out with lonely kids and giving them a friend so they don’t become unhappy or depressed. This is both heartwarming and also a little creepy. One of the friends in this episode was just a middle-aged guy with a cut-off shirt and a mullet, but kids like him because he plays actual air guitar. I’d be a little uncomfortable if I had a child with this guy as their imaginary friend.

We are introduced to Sam’s imaginary friend from when he was a child who goes by Sully. Played by Nate Torrence, this character is phenomenal and keeps with the Supernatural theme of having a great supporting cast of characters for the Winchesters to interact with. The interactions between Dean and Sully were some of the funniest the show has had to offer in years, so props to the writers on this episode.

One of my favorite one-liners from Dean came after he saw the dead imaginary friend named Sparkles with his blood and guts all over a child’s room. Knowing that the child saw this as well Dean said “This kid is going to need all the shrinks.” This whole scene was a goldmine, as later on the mother is unknowingly smearing Sparkles’ blood on her face and Sully whimpers “She’s got Sparkles on her face.” This episode of Supernatural had me laughing more than I have watching this show in quite some time.

However, what seemed like it was going to be a totally fun and light-hearted episode took a 360 degree to turn real quick about halfway through. We start to get some flashbacks from Sam’s childhood when he was constantly left alone in motel rooms by Dean and their father, and his only real friend was Sully. They are making plans to run away together when Sam finally gets a call from daddy saying he’s allowed to come on a hunt.

Sully tells Sam this is a bad idea which leads to Sam being a super-jerk to Sully and telling him to go away and not come back. I never thought I could get this emotional over an imaginary friend, but man, this scene was rough. Then it gets even MORE emotional when adult Sam apologizes to Sully for said super-jerk actions. The friends might have been imaginary, but the tears in my eyes were not. Okay, it wasn’t quite that bad, but you get the picture.

This episode of Supernatural lacked any real story development for the season until the end. Here Sam tells Dean that they need to seriously consider Sam going back into Lucifer’s cage if that means getting rid of The Darkness. Per usual, Dean insists that they will find some other way. Here we go again with a storyline that is probably going to mean one brother having to sacrifice himself for the other. Hopefully they get a little more creative with it as the season unfolds.

Sam is actually being dumb here, because he doesn’t know anything about the visions he is receiving. He knows they are about the cage, but who they are coming from is still a big mystery. The general consensus is that God is sending Sam these messages, but no one knows for sure. Until Sam gets some confirmation about his theories, it seems like a bad idea to just try and figure out how to put himself back inside Lucifer’s cage. I’d prefer that to be my last resort while Sam seems willing to do it right away. Then again, Sam hasn’t always been the most rash, think things through type of character.

This season of Supernatural has been great so far, with some super well balanced programming. They are keeping the story moving at a reasonable pace, while also mixing in the right amount of humor and quality creativity. Supernatural got me hooked years ago with this balance, and I hope they keep it up the rest of the season. Also, they need to bring Sully back at some point. He was just too great of a character not to make another appearance at a later date.