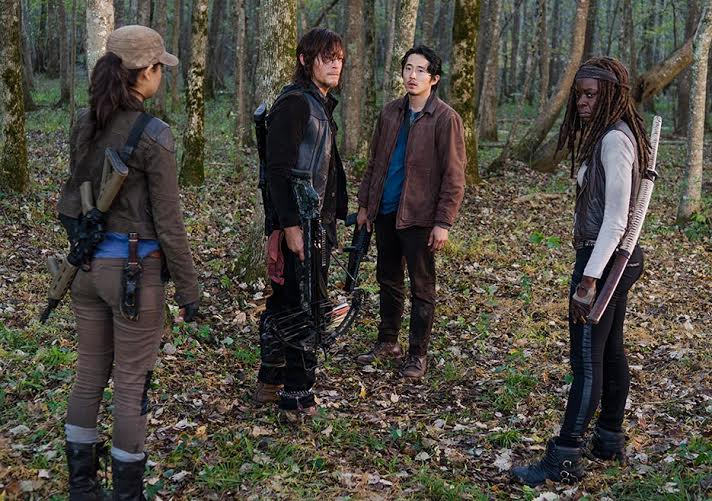 The Walking Dead had a really solid episode this week that didn’t necessarily move the story forward in any major ways, but did set some great groundwork and suspense for what is to come the rest of the season. It is easy to see that everything happening is just building towards an insane season finale, and eventual meet-up with Negan. Let’s take a look at the Kill Count after this week before I delve too deep into some analysis:

Although there wasn’t a lot of killing this episode, we did get to see Carol be a bad-ass and wipe out a truck full of Negan’s men single-handedly (more on that later). I also wasn’t sure if Morgan was actually killing walkers or not because he just sort of hits them really hard but never actually stabs them. I gave him the benefit of the doubt and assumed he can at least still kill walkers when he needs to.

Back to Carol, who has decided to leave the safety of Alexandria and go off on her own little adventure. Apparently she thinks if she doesn’t leave that she’ll have to continue to kill people, which she is against now.. Thanks a lot, Morgan. However, her plan goes a bit awry when she runs into a truck-full of Negan’s men out on the road. I really enjoyed this scene, because Negan’s men think Carol is freaking out because she is scared of them, when in reality she is struggling with the fact that she is going to have to kill them all to survive. She then proceeds to kill them all with the gun she had hidden up her sleeve. I still prefer cold-blooded Carol, but this new Carol isn’t so bad, either. It is interesting to watch a character struggle with their actions in this manner.

While Carol is out on her own, Rick decides that she needs to come back, and sets out with Morgan to go find her if they can. This gives Morgan the opportunity to pester Rick with his “all life is precious” ideals. Rick disagrees and understands that you can’t take chances and must do whatever it takes to survive. Morgan knows that Carol left because she can’t do that lifestyle anymore but Rick quickly puts him in his place by saying “She could because she has to. Sometimes you have to.” This episode of The Walking Dead was interesting because it put Rick and Morgan’s differing viewpoints against each other, but I really can’t see Rick changing his ways anytime soon. Hopefully when Morgan has his first real encounter with the Saviors he will understand that there are exceptions to his all life is precious rules.

Speaking of the Saviors, Daryl goes out on his own crusade to find and kill Dwight, the man who originally stole his motorcycle and ended up killing Denise. Daryl is torn up because he had the chance to kill Dwight, but let him go. He now feels responsible for Denise’s death and wants to make it right. While I’m glad Daryl wants to kill some Saviors, going out on his own is a really bad idea, and he ends up getting himself, along with Glenn, Michonne, and Rosita captured. Now three of my favorite characters are at the mercy of the Saviors and I don’t feel I can handle the stress. Poor Rick, he REALLY has bad luck with his significant others.

Not only have my favorite characters been captured, but the episode ends with Daryl getting shot by Dwight. We get a nice blood-splatter onto the camera and are not really sure where Daryl was shot or if he is alive or not. It would’ve been a great cliffhanger if the episode ended right there, however, we hear Dwight say “You’ll be alright” which kind of ruins the suspense. Although we don’t know Daryl’s fate for sure, we can assume Dwight’s comment means he didn’t fatally wound him and makes it much less of an “Oh my God” cliffhanger. I’m still concerned, just not as much as I could’ve been if they did this scene just a little differently.

Although it was a bit of a filler episode for The Walking Dead, I thoroughly enjoyed what they did with each of the characters, and really think they are setting up for an amazing end of the season. We know that the finale is going to be 90 minutes, and not everybody is going to make it out alive. I’m mentally preparing myself for what is sure to be one of the best episodes of the series so far.