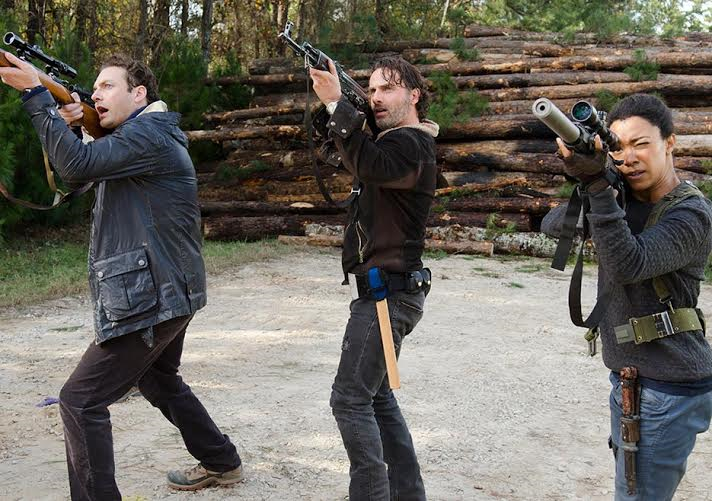 The Walking Dead aired its 90 minute season finale on Sunday night and it was, predictably, insane. The episode was a culmination of everything that this season has been leading to thus far, and we were finally introduced to the infamous Negan, leader of the Saviors. While it had its shortcomings, The Walking Dead is the best in the business at the season finale game, and this one did not disappoint. Well, it disappointed some people, but we’ll get to that. With one more season in the books let’s take a look at our final Kill Count for our characters:

As was to be expected, Rick Grimes came out as the top dog by a landslide and shows there’s nobody better at spilling enemy blood than him. When Rick wants you dead, there’s pretty much nothing that will stop it from happening. He is the ultimate bad ass of the post-apocalyptic world, and I don’t anticipate him being dethroned any time soon.

Well, I really don’t even know where to begin with this review. I’ve been waiting for this episode since the beginning of the season, and it did its best to live up to all of the hype. I was so invested in what was happening with Rock’s group and the Saviors, I found it hard to care at all about the Carol and Morgan story line. I’ve been annoyed by both of them as of late, and all of the screen time they got just meant I had to wait longer to finally see Negan for the first time. However, my views about this did change when Morgan FINALLY got a little character development and did what was necessary to save Carol’s life. Not only did he kill one of the Saviors, but he pumped all six rounds into his neck and face. I guess when Morgan does something, he does it right.

It was nice to see Morgan realize that maybe not all life is precious, and I believe continued encounters with the Saviors will solidify that into his head. Unfortunately, Carol still seems like she wants to be annoying and stay away from the group so she isn’t forced to kill anymore. Unless she doesn’t change her mind, she won’t last long with the Saviors on the prowl. Cold-blooded Carol is one of the better characters on the show, and I hope something happens to bring back that side of her in season 7.

The Carol and Morgan story line also introduced us to some new characters who  are apparently the knights of the post-apocalyptic world with their horses, armor, and long lance type weapons. We don’t really know anything about this group yet, but it’s safe to assume they will be pivotal in the fight against the Saviors.

One of the more important things we learned about the Saviors in this episode is that there are A LOT of them. They had enough man power to block every road north that Rick and his group were trying to take to the Hilltop. The RV scenes may not have been that exciting, but they were stressful not knowing at what point the final showdown was going to take place. We even got some more colorful lines from Abraham like “What the bitch?” and “Bitch nuts.” Writing for his character has got to be fun, and I’d assume they just pull swear words out of a jar to determine what he will say next.

The entire season finale of The Walking Dead and pretty much the entire season was leading to the final showdown between Rick’s group and the Saviors. We have been hearing about the mysterious Negan forever, and it was finally time for him to be introduced to the world. Our group is captured by the Saviors after a failed plan to get Maggie to the Hilltop, and Negan makes his first sinister appearance to the show. Jeffrey Dean Morgan absolutely knocks it out of the park with his performance, and shows us that Rick Grimes may not be the ultimate bad ass, but that Negan deserves the title. He is a terrifying character, who keeps calm and collected while threatening Rick with his barb-wire wrapped bat named Lucille.

The stress level during this scene was absolutely off the charts, and I don’t think I took a breath the entire time. All of our favorite characters were lined up on their knees while Negan tries to decide who he is going to use to make an example. He is not pleased Rick has killed some of the Saviors and needs to return the favor. After an excruciatingly long game of eeny, meeny, miny, moe, Negan settles on one character whom he will use Lucille to beat to death. Unfortunately for us, we get a first person view from that characters perspective and thus do not know who it is. They wouldn’t leave us in the dark about which character is killed, though, right? Wrong. We still get the first person view as Negan bashes their brains in. The screen then goes dark and we hear the continued sounds of Lucille bashing the brains of one of our favorite characters.

This cliffhanger is how the season ends, and I’m not very happy about it. It was actually pretty lazy from the writers standpoint to end with such a cliche cliffhanger like that. We’ve known from the beginning that Negan was going to kill someone off and we’ve been building up all season to find out who would meet their gruesome end. It wasn’t fair to those of us who have invested so much time into the season to be subjected to such an uninspired way to end it. We, and the character who was killed, deserve more than what we got. It would have been infinitely more powerful if we would’ve actually seen Negan kill one of the characters. They know we are going to come back to watch season 7 regardless, so the cliffhanger just seems like a weak and pointless ploy to get viewers back for the next season premiere.

Despite the end, this episode, and overall, this season of The Walking Dead has been amazing and with Negan finally revealed, season 7 looks like it will be even better. My original guess was that Daryl would be the character who died in this episode, but now I’m not so sure. I just figured that the writers would give Daryl a better death than to use him as part of a cliffhanger like that. I feel like it still has to be someone a little more important than Aaron, Rosita, or Eugene, but we’ll have to wait until October sometime to see who Lucille claimed as her first victim.