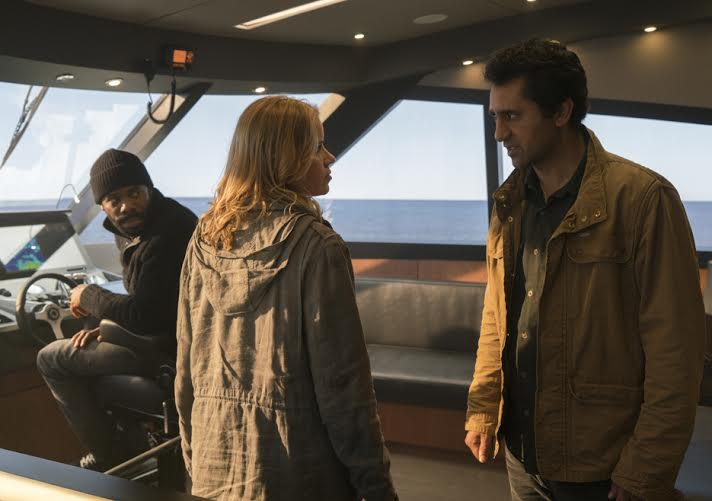 Fear the Walking Dead returned this week with its season two premiere, and while I’m still trying to process the finale of The Walking Dead I decided to tune in and give this new season a shot. I’m happy that I did because this was a solid episode of television, and this season will likely just keep getting better as the show finds its feet.

I was worried that Fear the Walking Dead would slowly yet surely turn into The Walking Dead but with different characters. Luckily, they proved right off the bat this season that they were going to be creative and take this show in a different direction. That direction, it turns out, is towards the sea. Rather than hanging around on land with the undead, our group joins Strand on his yacht to escape the now burning and zombie infested Los Angeles.

When our characters are on the beach at the beginning of the episode, the stress level is extremely high. This is because Travis and company really don’t know how to deal with the infected. They sort of have an idea now that they have to aim for the head, but overall the whole situation is brand new to them. This makes the zombies that much more terrifying than they are on The Walking Dead. On that show, the zombies are just more of an after-thought at this point, but on Fear the Walking Dead they are still the main threat to the characters.

They escape the beach to head towards the yacht waiting for them, and the show then continues its trend from last year of having zombies killed in really creative ways. One of the infected pops out of the water and grabs the dingy, trying to get aboard. Nick takes this opportunity to pull up the motor and shove the whirling propeller right into the zombie’s face. The gruesome effect was awesome, and the now faceless zombie floats away with everyone else unharmed. I hope the show continues to find new and creative ways to kill the undead. Just stabbing them in the head with a knife gets boring after a while.

Aside from the opening scene this episode didn’t have too much action, but instead we get a ton of character development and relationship building between everyone on the boat. We’ll start with my least favorite character, who just so happened to be my least favorite from last season, too. That would be Chris, Travis’s son, who is awful. I know his mother just died and everything, but he really needs to find a better way to vent. He goes from refusing to leave his mother’s body alone, to dumping it in the ocean, to punching his father in the face, and finally jumping into the ocean himself for no apparent reason. He’s got some issues he seriously needs to work on and until he does he will continue to be the Carl of this show.

My favorite character right now is either Nick or Strand. Strand, because I don’t really know what to make of him, and the mystery intrigues me. He also has some great one-liners, and those are the quickest way to my heart. Nick is potentially my favorite because he is by far the deepest character on the show. He is obviously a good person, but he is fighting addiction, and sometimes that leads him to be more selfish than he normally would be. Out of all the characters I believe he has the best chance of surviving until the end, whenever that may be.

Travis is slowly learning that you need to be ruthless to survive, and that is why he will probably make it quite a while as well. He agreed with Strand that they couldn’t help people and take on any more passengers. It’s decisions like that one that will keep you alive in a world like theirs. Maddie has shown flashes of ruthlessness, but she still has too much compassion and is going to have to learn to think more like Travis and Strand. Apparently, I’m not a big fan of characters having any heart at all. Oh well, it is what it is.

I was a big fan of Alicia last season, but she had to go and ruin it by being extremely careless in this episode. She makes a new buddy over the radio (when is that EVER a good idea?) and she quickly decides it’s OK to give away her location to see of she is close enough to help her new “friend.” Well, after she tells him that they won’t be able to help, her radio pal says “I’ll see you soon” and ends all communication. It was eerie, and now I’m assuming she knows that she messed up; it’s pretty safe to assume that it’s all Alicia’s fault that this mysterious vessel is headed right for them. Judging by the upturned boat peppered with bullet holes that Nick found, they’re probably some sort of post-apocalyptic pirate. While that sounds really cool, it doesn’t bode well for the future of our group.

Fear the Walking Dead started its sophomore season off on the right foot and I was definitely pleased with the direction they are taking the show. It’s going to take a load creativity to keep it from turning into The Walking Dead volume 2, but I believe the writers have proven they are up to the task, and ready to make the show its own.