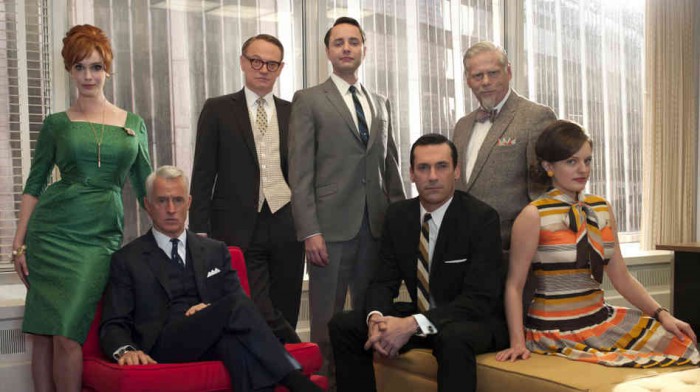 With the NBA Finals upon us, writers, bloggers, and sometimes-writers are scrambling for unique angles from which to approach the series. Me? I’m where I always am: Half-reclined on a secondhand couch with some carbohydrate-and-cheese combination on a nearby plate. And I’m eager for two things: Finals basketball and Sunday-night television. Which is why I’m looking at this Heat–Spurs matchup through the lens of AMC’s Mad Men, and drawing player-character comparisons. Lazy? Probably. A stretch? God, yes. Unnecessary? I wouldn’t have it any other way.

Who else? The similarities aren’t uncanny, but with this stretch of an article premise, we’ll say it’s spot-on. Think about it. Both are haunted by their dark pasts—one escaping a dark, abusive childhood, and the other free of something called Cleveland. And they’re both at once heroes and anti-heroes. Half of their viewers want to see these two hit rock bottom, yet seemingly the same amount want to see them come out on top, and they almost always do, to which a slew of female Mad Men characters can attest. Sure they have their faults. One, a drinking problem and a slowly deteriorating facade of infallibility; the other, a support system receding about as much as his hairline. But when put together, well, let’s just say LeDon Drames is the type of guy Salt-N-Pepa would write a song about.

Following the LeDon Drames analogy, Kawhi-as-Ted falls right into place, with the Spurs and Heat swingmen likely facing off as Ted and Don have done and will (hopefully) continue to do. Like the former head of CGC, Kawhi is by all accounts talented, a hard worker, and an admirable teammate (although I don’t recall hearing of his attempting to kiss any fellow Spurs). Like Ted to Don, Kawhi has a lot of the same traits as LeBron—size for his position, a unique skill set, versatility, and freakish athletic ability—but is a decidedly off-brand version, lacking what makes LeBron LeBron (elite guard skills in that power forward body), much like Teddy lacks what makes Don Don (essentially, the timbre of his voice and a wife that doesn’t get obliterated before awards ceremonies).

Size matters. Especially in these Finals, after fans nearly saw Roy Hibbert and David West haul one of the shallowest playoff teams past the defending champions. Like Joanie at SD&P, Timmy is the Spurs’ quiet backbone, a body part both he and Joan rely heavily upon to hold themselves and their teams up. Despite their glaring talents, both are underappreciated—Joan by her peers, and Tim by fans for whom efficacy takes a backseat to showmanship. All this without even mentioning each’s longstanding closeness with half of the next duo …

The white hair. The dry wit. The commanding of respect within the league/industry. The alcoholism and mommy issues … OK, maybe the similarities ended a sentence sooner, but still, one can’t dismiss the Roger-Joan and Pop-Duncan relationships. Yes, Joan is going to the beach with Bob Benson now. But she and Roger share an offspring, and that’s a bond that doesn’t break; Tim and Pop, meanwhile, are the Spurs organization. I’m not sure if Pop revels as much as Roger does when it comes to firing employees (in fact, I’m pretty sure he doesn’t), but they each like to get a little “nasty” when the time’s right.

Pete’s in a rut. His wife has kicked him out of his own home, his mentally deteriorating mother is living at his shag pad, he’s being forced out of accounts, he’s falling down stairs, his father-in-law caught him at a brothel, and he still has a remarkably punchable face. Wade might not be in the same boat, but it’s floating in the same port as Pete’s. He’s been relegated to second banana on his own team, injuries are visibly and statistically hampering him, his ex-wife tried to kidnap his kids, refs don’t buy his collapse-in-a-heap schtick anymore, and almost as many people want to punch him in the face. But one question remains for each: Will their last appearances (Wade’s 21 points in Game 7 of the Eastern Conference Finals, Pete’s smoking Stan Rizzo’s sticky icky) be signs of things to come? Or will there just be more of the same?

After the whole French thing, it gets a little shaky, but bear with me: Tony isn’t married to LeBron, and their being on opposing squads doesn’t help my case either, but a lot is riding on how those two react to one another. Will Megan ever be able to stand up to Don? Like Tony, there’s nothing really there to stop her aside from the shadow of a larger-than-life figure. Can Togan Paper tame the tiger that is LeDon Drames? Or will Togan end up (as has been suggested) mauled, bloodied, and disposed of? One thing I am sure of, Tony probably wouldn’t turn down the advances of an actress who dangerously strolled across the island of Manhattan to arrive sweatily at his apartment just to talk.

Both are annoying as hell—Harry to his peers, and Bosh to people with the gifts of sight and hearing. Both have at least one instance of standing up for themselves when they felt they were being overlooked. And each have improved their hairstyle dramatically over the course of their career. Yet at this point, when we see either of them in action, we are left thinking, “Wait, what does he actually do again?” Bosh was asked to relinquish some of his scoring touches when he joined Miami, but he might have misheard it to mean “be scarce, and for the love of god, avoid rebounds at all cost.”

… or at least, the Spurs hope Manu is Betty Francis. Much like Birdie for the last season and a half, Manu hasn’t looked like his eye-grabbing self so far in these playoffs. But with the right motivation (and perhaps some speed pills), Betty was back to her gas-station-attendants-are-staring-at-my-ass self again and seducing Don up at camp, only to spurn him the next morning. If Manu can make that type of power play, the Spurs could be scarier than Peggy and Abe’s neighborhood.

Face it, when Pat Riley promoted Spoelstra from video editor to head coach, no one thought Spo would be able to cut it. Yet here he is, seeking his second straight NBA championship, and not solely on the backs of the talent around him. For some of the same reasons, and a few different ones, viewers and her peers might not have expected much from Peggy either. But the similarities don’t stop there. Her relationship with Don? Generally strong, with some definite bumps along the way, not unlike the Spoelstra-LeBron one. Both parties are making it work for now, but you know that if the Heat take the series, LeBron will get the adulation, while Spoelstra will feel pats on his back from some large hands, and that’s about it. This was the shadow Peggy thought she’d escaped from, only to find out she can’t.

Where did these guys come from? Brazil and Beloit, respectively (although the jury’s still out on Bob’s credentials), but they certainly both seem to have made an impact out of nowhere. Bob is all about coffee, which the big Brazilian should know a thing or two about. Some pragmatic kindness ingratiated Bob with Joan to the point that he’s making Roger jealous, and it’s taken a lot of work for Splitter and Duncan, our Joan, to share the floor together. That Tiago-Duncan pairing is equally as odd as Bob-Joan, but man is it working for everyone involved so far. Here’s to hoping we never find out how Splitter looks in short shorts.