It would appear as though one of today’s biggest hip-hop stars had some downtime on his hands this past weekend. Drake (or, as some might call him, “Wheelchair Jimmy”) took this his Instagram account with a playfully photoshopped image of his head on Draco Malfoy’s body from the Harry Potter franchise. 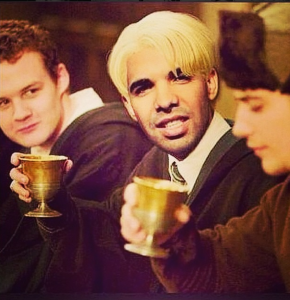 Speaking of comical catch-phrases from ABC’s TGIF shows from the ’90s, our boy Drake definitely has a flair for the funnies. If you didn’t catch him hosting Saturday Night Live last season, here’s one of the many humorous sketches from the show, where he impersonates a beloved television character (among others).