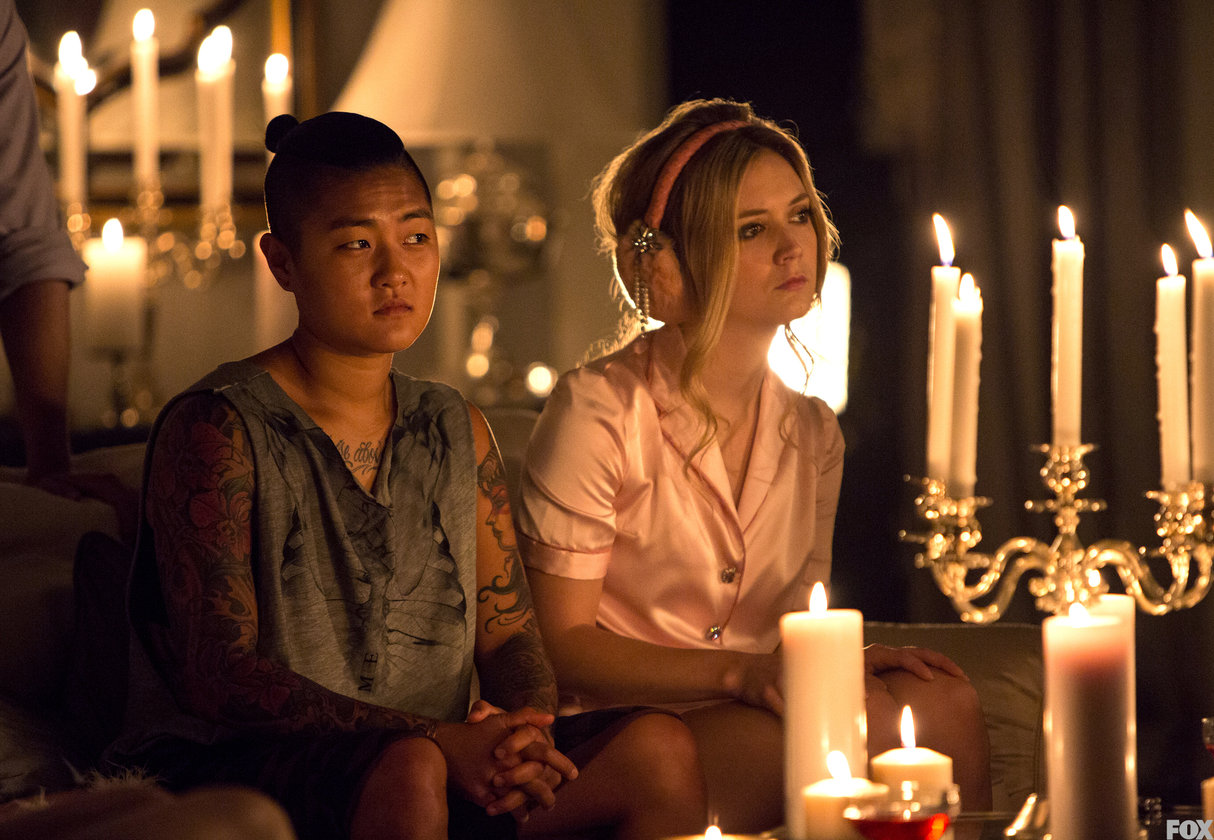 Though I was disappointed last week with Scream Queens, this week’s episode quickly redeemed itself. In fact, it may have been my favorite episode yet.

It was just the right amount of ridiculous and had plenty of laugh-out-loud moments. The Dickies hosted an intervention for Chad, in which they told him he had to “stop boning so many old chicks.” This led Chad to profess his sort of love to Chanel and finally agree to take their relationship to the next level, at least for the “amount of time he deems acceptable.”

The Kappas, led by Zayday, also had a sleepover in an effort to sniff out the Red Devil. Amidst the fact that they’re trapped in their own house by the killer himself, they proceed to play truth or dare – you know, as you do in a time of crisis. Jennifer the candle vlogger, who was my favorite character this episode, was the only person to see the flawed logic in this, pointing out that the killer would clearly pick truth and then lie. (Jennifer also served as the voice of reason later in the episode when she told the chief detective in charge of finding the Devil what we’ve all been thinking, “you are probably the worst cop ever.”)

But, alas, the voice of reason is always doomed to be ignored, as none of the Kappas or Dickies were able to comprehend how someone could lie in a game of truth or dare; “it’s not called truth, dare, or lie,” as Chad said.

One thing that playing sleepover games did achieve, however, was the long-teased kiss between Chanel Number Three and pledge Sam. The kiss caused Number Three to decide that she wasn’t a lesbian, but instead was “in love with love” regardless of the gender. It’s things like this, and the previous girl-power episode, that set Scream Queens apart; the fact that, among the ridiculous plot lines and absurd dialogue, they can actually touch on important messages while still making it entertaining. Of course, Number Three then proceeded to dare Sam to go down to the secrets-cellar, where she was later suffocated by the Red Devil, but that’s neither here nor there.

After Sam’s death I realized that I should have been keeping track of all the different ways that the Red Devil commits his murders. There’s a new murder weapon practically every time. There’s been a classic stabbing, a slice in half with a chainsaw, and a lawnmower incident, and this episode we saw the use of an ax, a plastic bag, and a nail gun. While we could possibly assess this to being a writing decision to make each new murder more bizarre than the last, maybe we should actually be looking to them as clues as to who is behind the devil mask.

As we learned this episode, at least one of the Red Devils (remember, there are two, “dos diablos!”) isn’t a Kappa. Primarily all of the Kappas were together at the time of each murder this episode, which means it’s someone outside of the house. We also saw the Devil use a golf swing to chop Caulfield’s head off. Now who do we know that plays golf? Boone; we saw him play golf with Chad during the pilot episode. And it just so happens that Boone faked his death with the help of the Red Devil, only to never be seen again. Sounds pretty suspicious.

We already know that Gigi is, at least, involved with the Red Devil, if not one of them, so it’ll be interesting to learn the story between her and Boone’s alliance. Given that my theory is right, of course. While I was a bit worried last episode with how quickly we were being given information, this episode I realized that we still have so much to find out. Unfortunately, we’re going to have to wait until after the World Series, because Scream Queens isn’t returning until November 3. In the words of my boyfriend, “baseball ruins everything.”