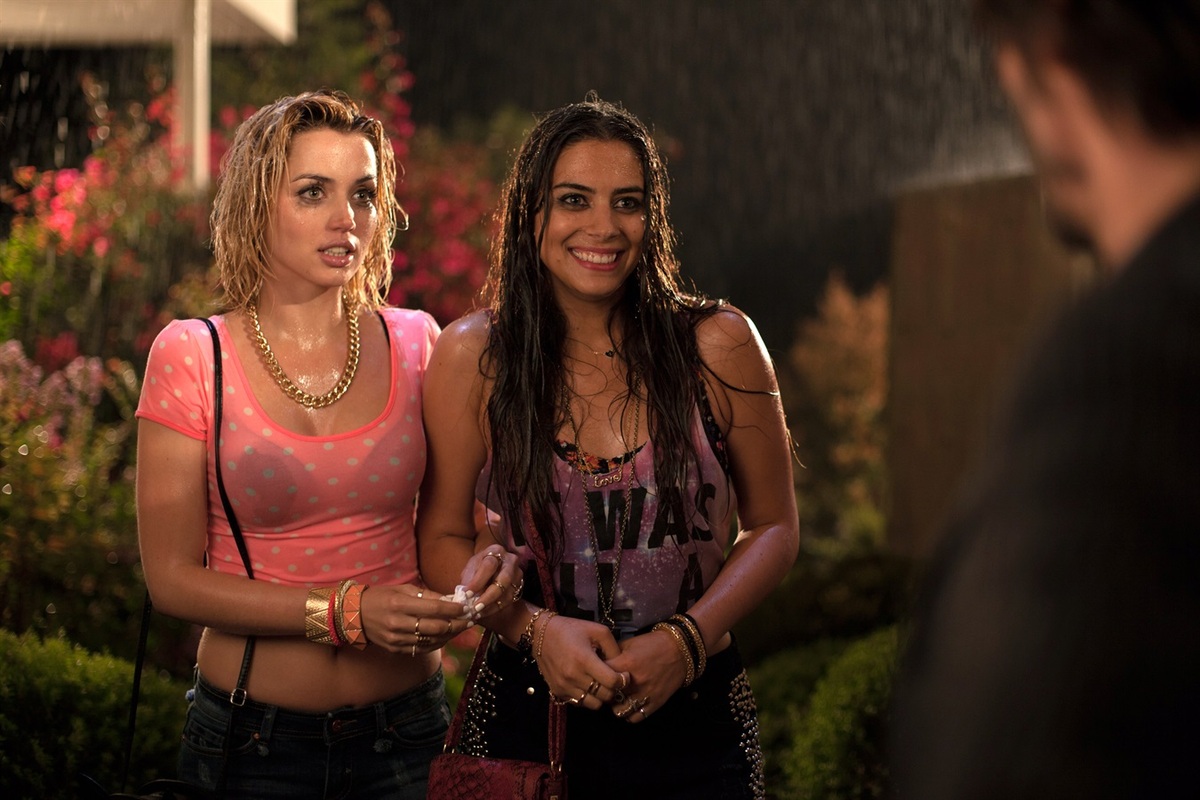 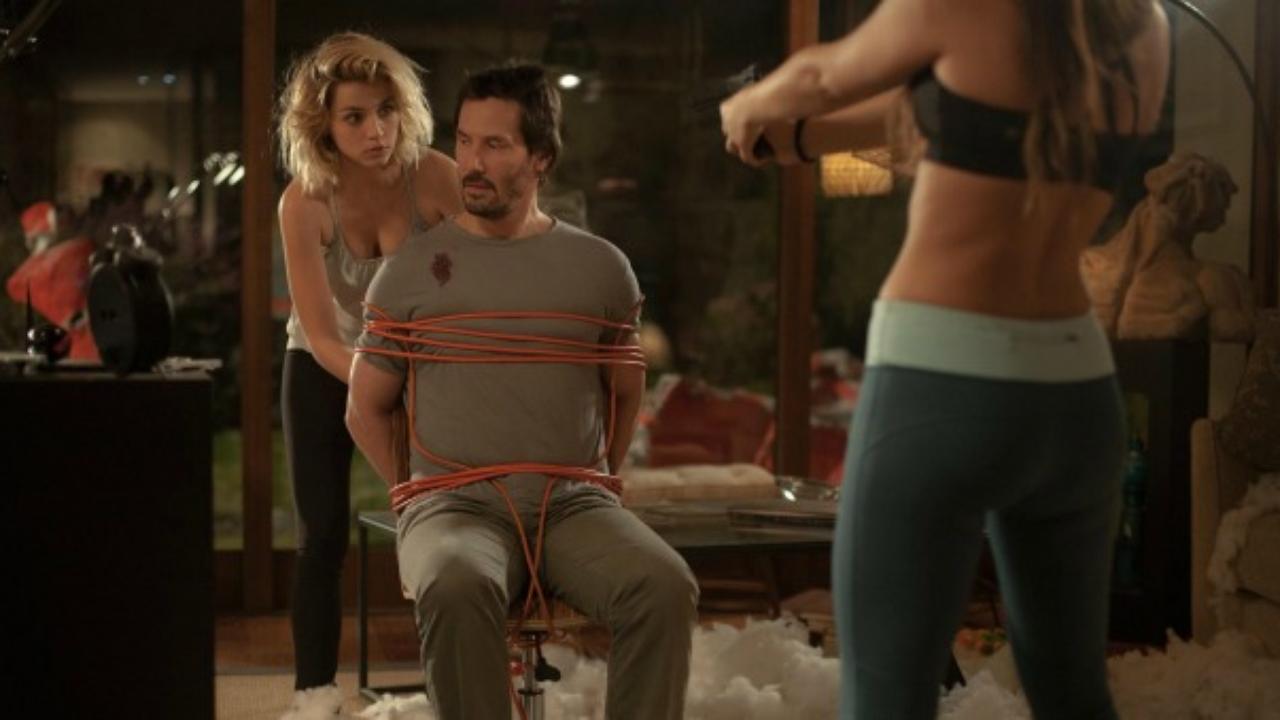 I covered Knock Knock in a trailer article months back, and my review comes to you because I recently watched it on demand. It should be noted early that Roth makes a dedicated effort here to be less indiscriminately violent than usual. From the Hostel series to The Green Inferno and all the mayhem in between, Roth has established himself as one of Hollywood’s most blood obsessed and chaos oriented directors. Knock Knock differs from this trend in its emphasis on the psychological rather than the physical. How effectively this works is a reasonable point of debate, but it’s clear that Roth attempted a change.

For Reeves as Evan Webber, all the proverbial warning signs are there. Bel (de Armas) and Genesis (Izzo) are young, attractive females banging on his door in the middle of pouring rain. Such an occurrence in movies is either unrealistic in real life or realistic in the movie product, but done out of deception instead of randomness. Point being, it never makes sense for a character like Webber to graciously accept what should blatantly be seen as darkness disguised as beauty. Nevertheless, part of being the Knock Knock audience or films like it is accepting the absurdity of the premise. 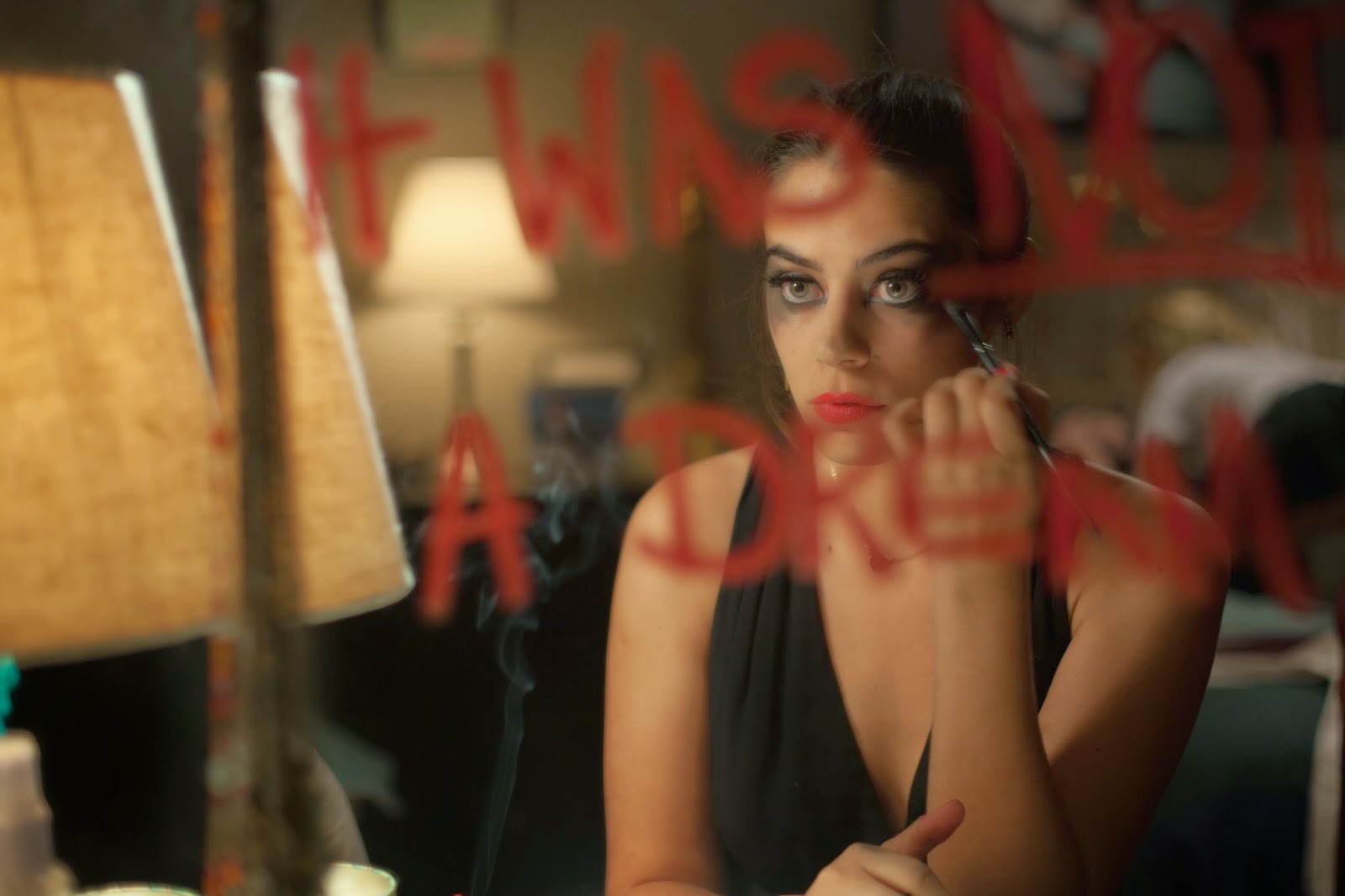 And the premise works in the beginning. The burn is methodical, Bel and Genesis both being friendly and inquisitive individuals during their visit. They attempt to appear as genuine to Webber, and their story of how they became lost does make sense. Reeves is strong during this stage of the movie when it comes to playing the committed but tempted family man. He loves his wife and two children, and his gut is to value the sanctity of marriage, but his grip slips as Bel and Genesis butter him up. This comes in the form of flattery. Talking about Webber’s muscles. Feeding his ego about being a past DJ. Asking him about his sex life.

Webber foolishly plays along, naturally, because Knock Knock wouldn’t exist without the stupidity of its lead character. The breaking point comes when Webber wants the girls out of his house so they can catch their car ride elsewhere. They instead take a shower, and the nude duo feed into Webber’s lust by basically assaulting him once he’s inside the bathroom. After initially resisting, Webber submits. And this is where Knock Knock begins to lose its appeal. The gig is up, the audience’s point of curiosity has ceased, and Roth begins to embrace an overload of lunacy. 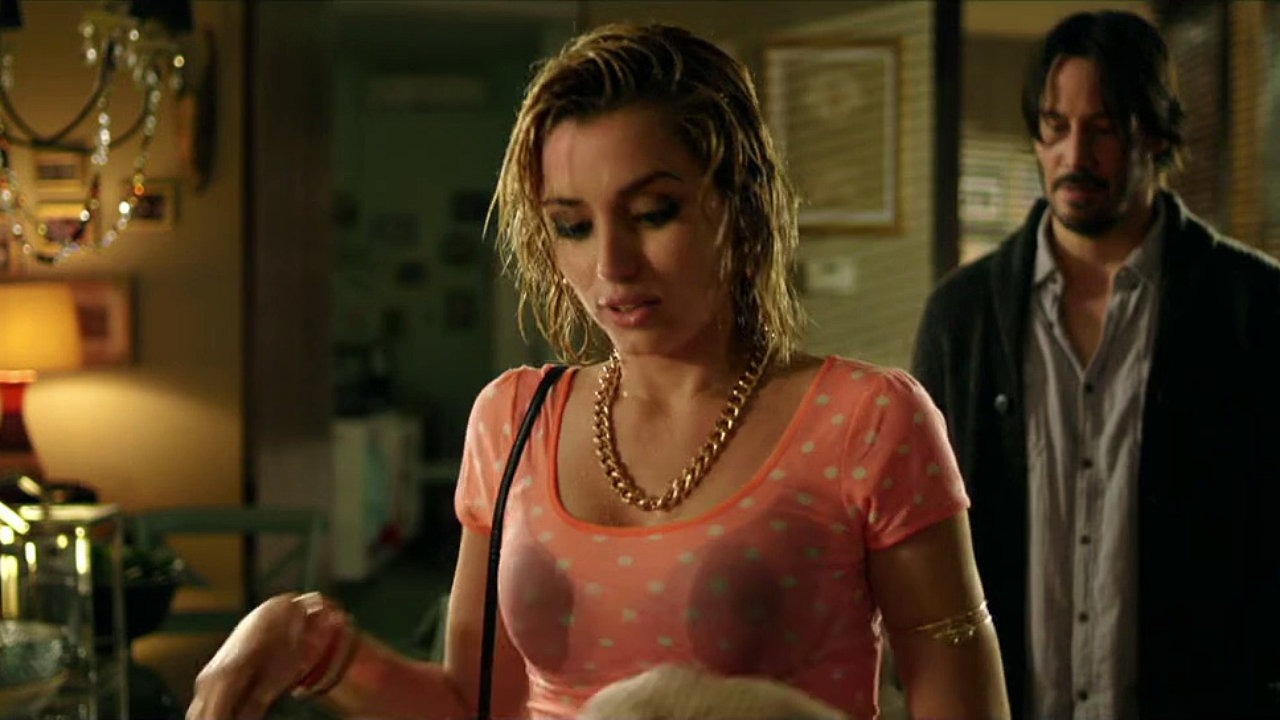 With the lunacy comes overacting from Reeves and annoying tendencies from the leading ladies. Perhaps others feel differently, but it seemed that Reeves yelled an unbelievable amount once Knock Knock shifted into its torture territory. And I’m not talking about yelling because his testicles were electrocuted or his nipples were beaten with paddles. These things don’t happen in Knock Knock, you filthy animal, so stop thinking about them! Oh, I’m the dirty animal for creating these scenarios from my imagination? It’s a Roth movie, and one would expect these things in a Roth movie. But Roth is a changed man, evidently, so we have to settle for Reeves being blasted in the ears with loud music and tricked into believing Bel is only fifteen-years-old. That and a preposterous amount of yelling. 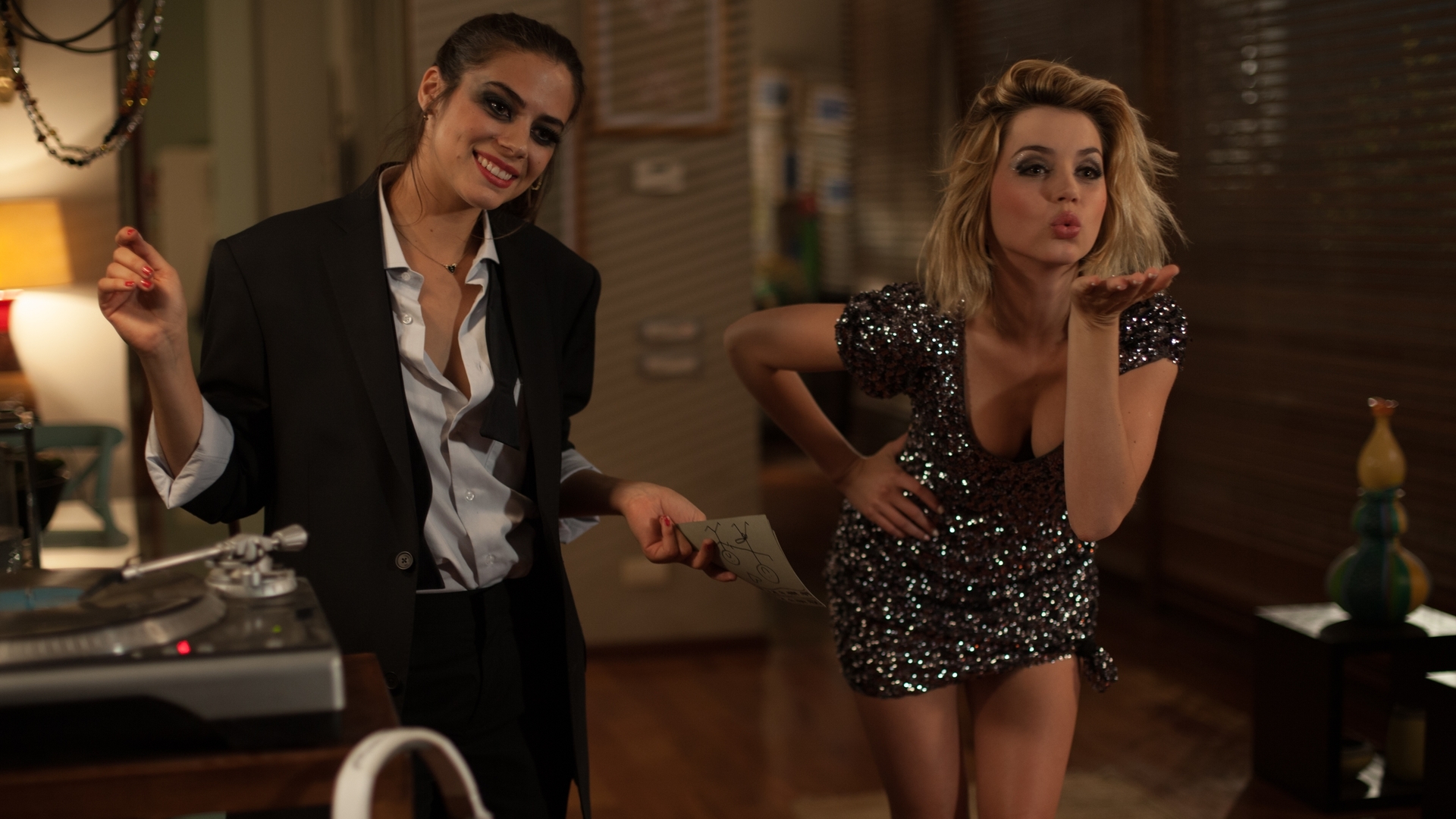 The yelling from Webber is the most obnoxious part of the movie. It even boils my blood a bit right now. And while Bel and Genesis are fun to watch in a devious way, they’re insanity doesn’t always come across as believable. Many of their scenes are unintentionally funny or outright comical on poor line delivery alone. It’s possible Roth was after this end. Some reviews have referred to Roth’s creation as a satire. That said, Knock Knock feels like another misfired entry into the psychological horror category rather than a well done satire. I’m not sure Roth is the best candidate to poke fun at others for their sensational and gimmick focused approaches.

In the end, Webber is pushed to his brink. A video is posted online of him and Bel having sex. His house is torn up and all his wife’s beautiful artwork gets destroyed. He’s buried alive aside from his head, and at multiple points he feels that death is inevitable. In spite of inflicting unspeakable savagery on a mostly decent man, Bel and Genesis have a code. They end up preferring to make Webber live with his new situation than kill him. This again feels like a stretch, but looking for stretches eventually becomes a pointless cause when viewing this movie. Like mentioned earlier, a degree of entertainment can be found once the ridiculous nature is embraced.

Is there enough entertainment value to outweigh the negatives? Probably not. But watching Reeves battle two devilish women at least doesn’t lack for storyline points. Knock Knock is never boring, and its beginning gives it some level of purpose. In closing, you’re better off not watching Knock Knock, but for the sake of guilty pleasure, you could do worse. 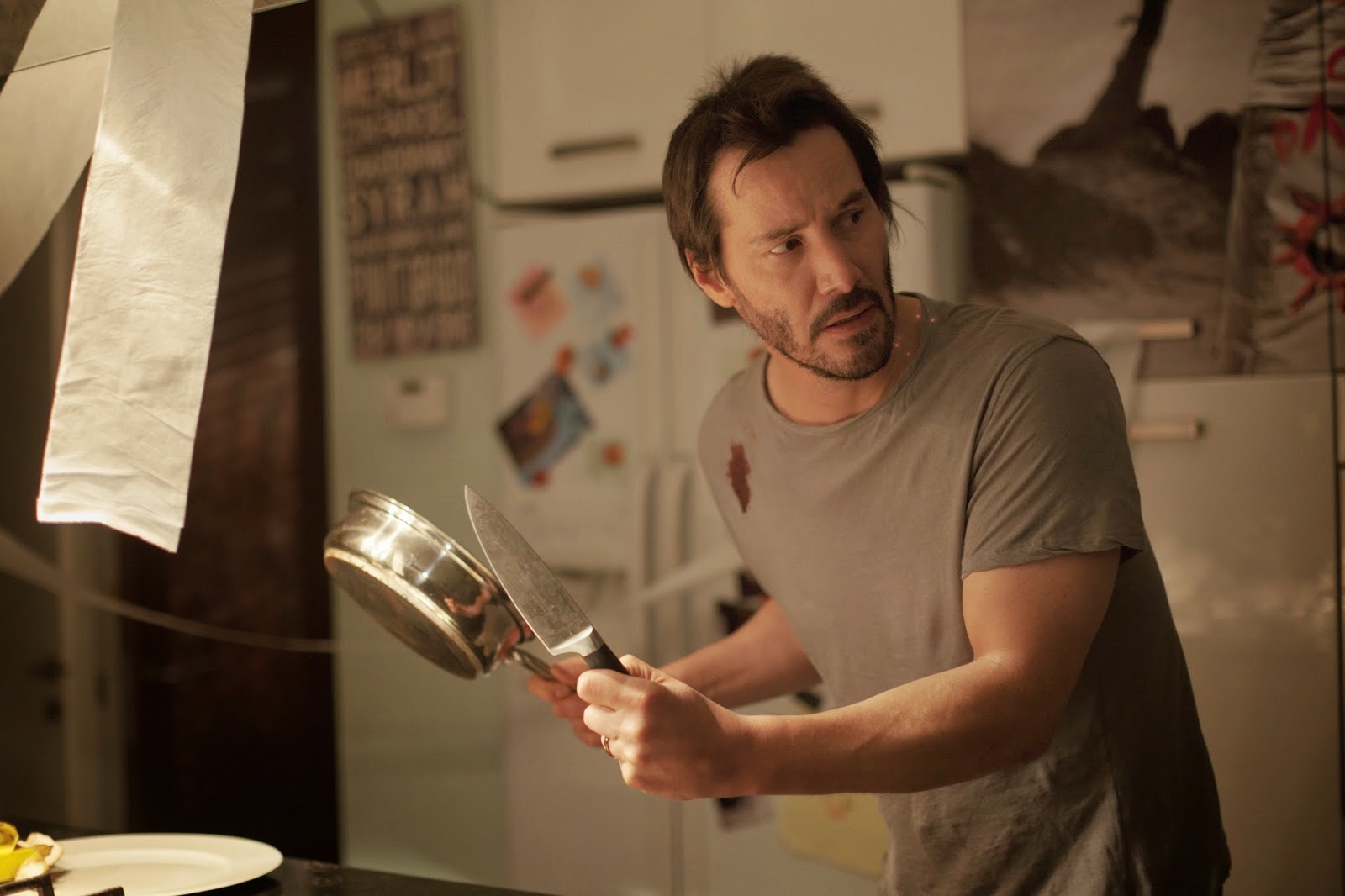 In case the knife doesn’t work, Reeves has a pot.