Trending
You are at:Home»Featured»‘Star Wars: The Force Awakens’ Brings You Home
By Mike Bitanga on December 19, 2015 Featured, Movie Reviews, Movies 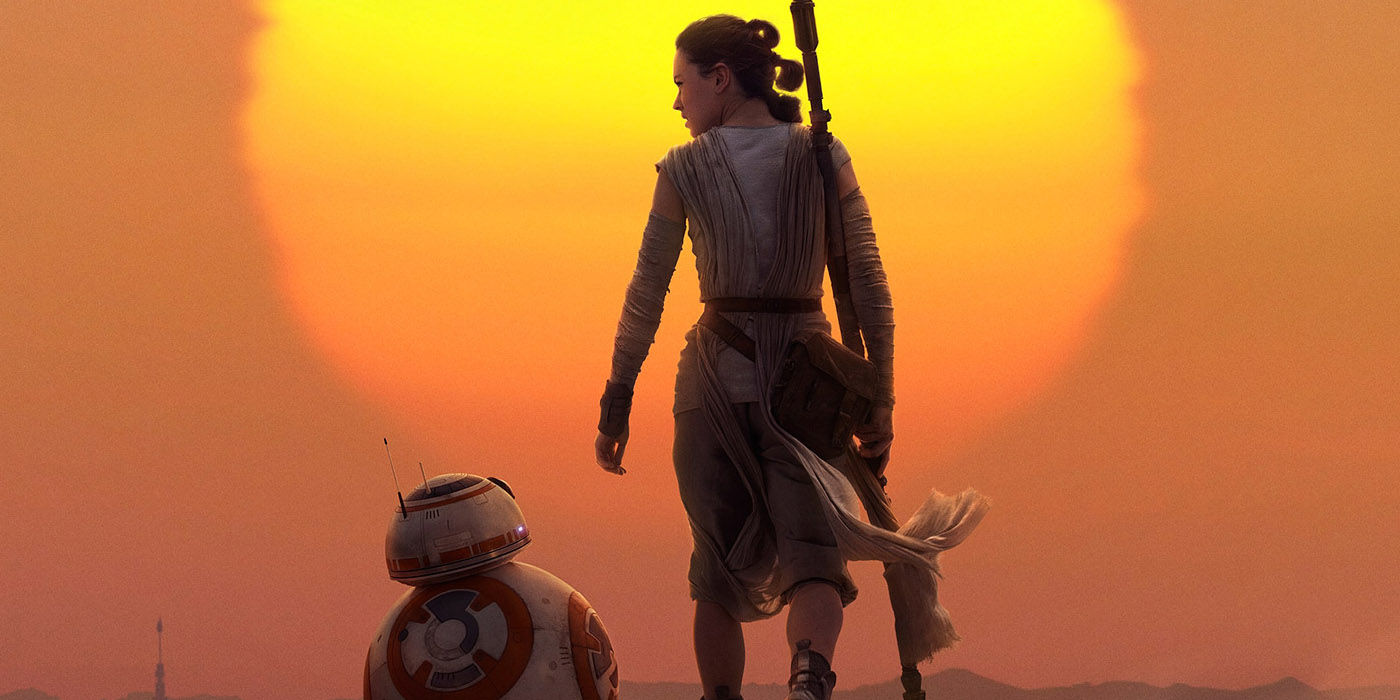 The co-existence of the light side and the dark side of the force is the basis of the Star Wars mythology, similar to that of the Yin and Yang in Taoism, making the saga timelessly connected to the human condition. The everlasting fight between good and evil continues in J.J. Abrams’ Star Wars: The Force Awakens, which takes place three decades after the defeat of the Galactic Empire in Star Wars: Return of the Jedi, where evil rises again with The First Order. Our heroes come in the form of The Resistance, made up of new faces, along with some very familiar, legendary ones. Harrison Ford is back as Han Solo, Carrie Fisher is back as Princess Leia, and they’re joined by a handful of the saga’s beloved characters. Along for the ride are the fresh faces of John Boyega as Finn, Oscar Isaac as Poe, Adam Driver as Kylo Ren, and Daisy Ridley as Rey.

J.J. Abrams has truly put his heart into this project, creating a film that pays its respects to the original Star Wars trilogy, while opening up new doors to an engaging cast of characters and their vastly entertaining adventure. J.J. Abrams, along with Michael Arndt, and Lawrence Kasdan, have penned a script that’s fast-paced, humorous, and magical. It’s a fairly tight story that smoothly introduces the new characters, while weaving in our favorites, in this new space opera. There are some kinks in how certain parts are handled, but nothing too alarming. The script feels nostalgic, and at times can feel like a rehash of the original trilogy, but it definitely makes some bold choices that will resonate throughout the galaxy.

Abrams and his crew have not only weaved a worthy story, they have also created a world that feels organic. It paid off to use as many practical effects as possible, making the film feel real, giving you the opportunity to immerse yourself further. The crew successfully married practical effects with CGI, creating a film that feels balanced, just as the Force should be. Not to mention, the film had some remarkable shots, such as the silhouette of tie-fighters bathing in a crackling sunset or the beautifully shot lightsaber duel amongst a Samurai-like forest of naked trees on the snowy Starkiller Base. The main lightsaber fight, like in the original trilogy, is well-shot and choreographed in that it tells a story  and allows the characters to reveal themselves further. It’s raw and messy rather than fancy, allowing you to feel every buzzing blow. The film is coupled with the amazing music of John Williams, as each scene strings at a variety of emotions. Of course, it wouldn’t be an excellent film if it weren’t for the perfect cast to inhabit the galaxy created. 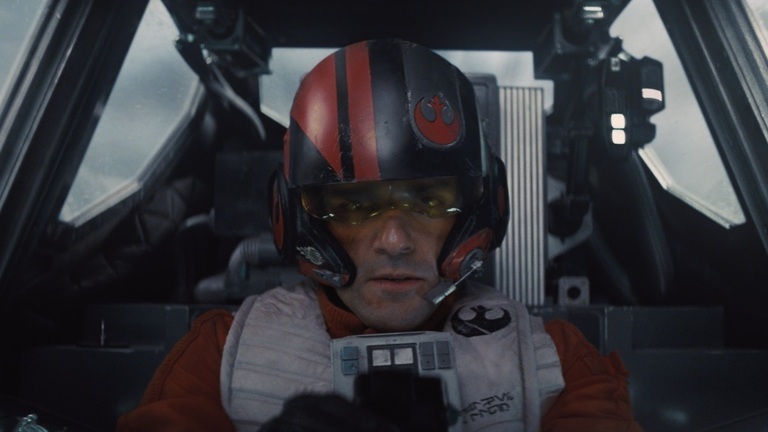 When Harrison Ford as Han Solo, with Peter Mayhew as Chewbacca at his side, says, “we’re home,” he means it. Ford is right at home playing the smart mouth smuggler-turned-Rebel, and he hasn’t lost a step. He may be in his most dramatic storyline in this film, but he still manages to be the cocksure hero that’s relatable and never short on wisecracks. Yes, Ford has some of the best lines in the movie, and he knocks them right out of the park without even trying. In addition, the spark between him and Carrie Fisher’s Princess Leia, or General Organa, can still be felt, even through all the drama of their history between now and then.

The first of the new faces we meet is Poe Dameron, played by the vastly underrated Oscar Isaac. Isaac is a very likable, natural leader as Poe, the best pilot in the galaxy. You already know he’s a talented hero just by looking at him, and then he surprises you by having some quippy comebacks that are just as sharp as his fighter pilot skills. He’s a contender for “coolest man in the Star Wars galaxy,” although he has to cover more proving ground to reach Han Solo’s level. Not to mention, he has a very amiable droid in BB-8, who will win you over with one glance.

Next, we meet Kylo Ren, played by the very capable Adam Driver. Ren is a tortured soul, just as Darth Vader was, but differs in that he’s struggling to control his powers and embrace the dark side. He’s not fully formed yet, but he shows you just how powerful he is, coming out of the gates. He reports to a higher power in Snoke, an alien that kind of reminds you of a Power Rangers villain. Ren comes off as an unstable maniac fanboy of Vader that will lash out as he pleases. You can feel his carnage, which is threatening at times, yet hilarious in other instances. Driver succeeds in playing a complex character with an insinuating manner and a puzzled backstory. 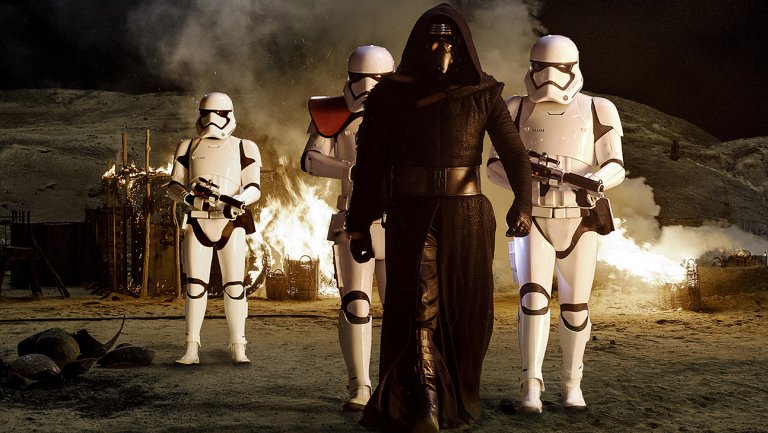 In the same instance we meet Kylo Ren, we meet FN-2187, a storm trooper turned Resistance fighter played fantastically by John Boyega. FN-2187 or Finn, as later renamed by Poe, is the everyman that believes in what’s right, yet is scared for the most part. Boyega is hilarious and heroic in a very relative way. He wasn’t born with the components to be a hero, but he decides to become one anyway, perhaps with some inspiration from the lovely Daisy Ridley as Rey, a scavenger and survivor on the planet Jakku. She has a mysterious past, as she was abandoned by her parents to fend for herself, learning to fight and survive through necessity. Ridley projects a natural gallantry that will inspire you to cheer, and also a curious nature that starts to unfold some of the mysteries about her past.

Star Wars: The Force Awakens will make you believe in heroes the way you did when you were a child: with no catches, no angles, and no gray areas. That innocence that we thought we lost is somehow regained momentarily in the runtime of this film, and that alone is a miraculous win. It relies on nostalgia for the first part, challenging you not to initiate the waterworks from the moment the Millennium Falcon is shown, and becomes its own film by the end, establishing a cast of characters that are rich and complex. It is a reminder that legends exist, and that the battle between good and evil, both inside and out, is what defines us. It’s been a while, but we’re finally at home in the Star Wars universe again with this film.