Trending
You are at:Home»Movies»Movie Reviews»‘Carol’ is Subtly Beautiful and Rewarding
By Tyler Birss on January 1, 2016 Movie Reviews, Movies 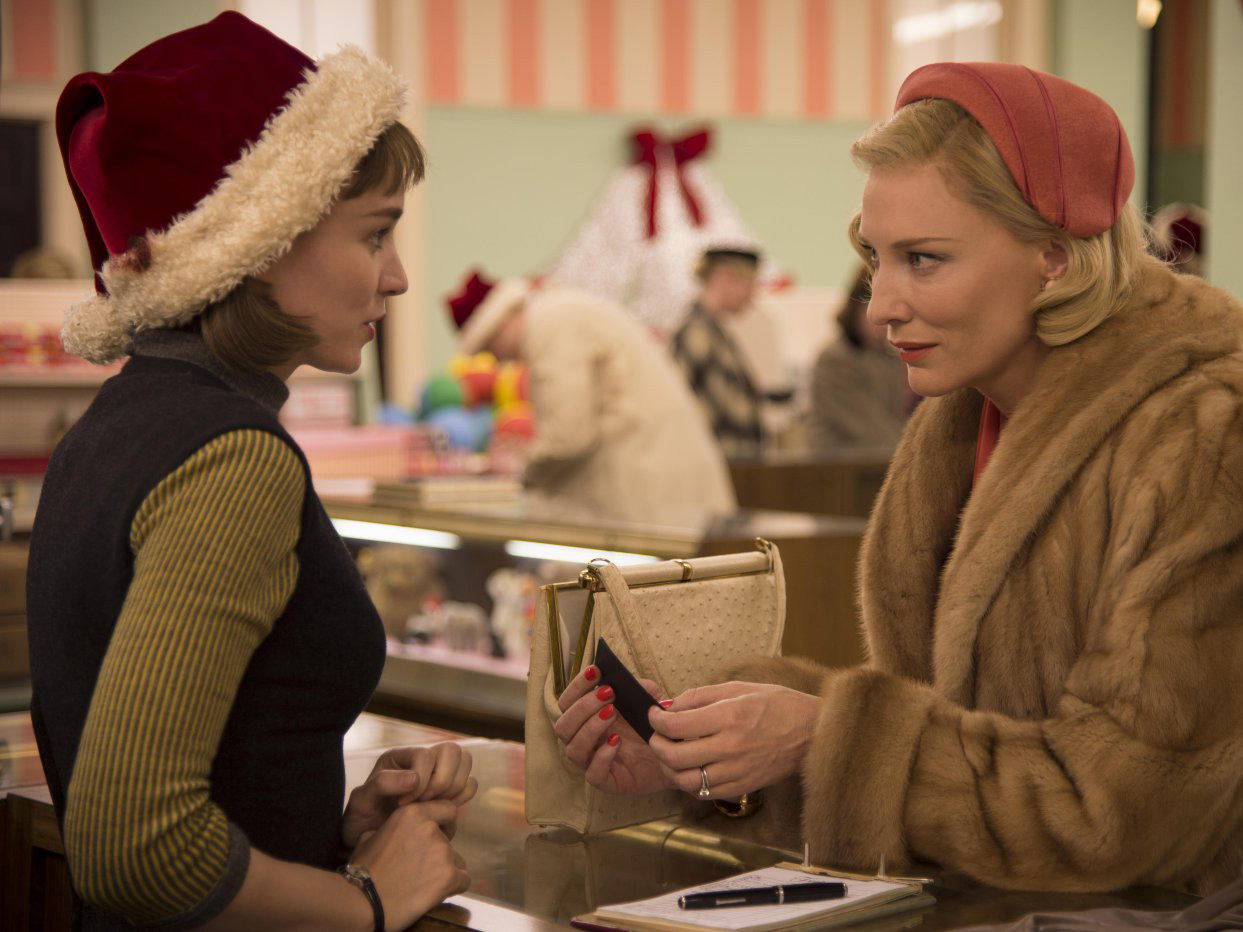 Carol is recommended to prospective movie watchers interested in strong romantic chemistry within lead characters and thoughtful storytelling. Cate Blanchett plays the titular Carol Aird as Rooney Mara encompasses the younger Therese Belivet in this slow but precise piece of work. Although Kyle Chandler and Sarah Paulson have significant roles, Carol is commanded and ultimately a success behind the performances of Blanchett and Mara. Todd Haynes has been rightfully praised for his work as the director. This understated cinematic project has the literary foundations of The Price of Salt (later published as Carol) by the late Patricia Highsmith. I would suggest the proverbial “not for everyone” tag to Carol the film with its lack of speed and reliance on the subtle rather than the explosive.

Blanchett and Mara have the backdrop of 1950s New York in a world still repressive of women – and the ante on that is raised considerably when discussing women attracted to other women. While labels aren’t utilized in Carol, a direct extension of its time period, Blanchett is drawn to Mara from seeing her the first time. The context of Blanchett’s character finds herself in the middle of a divorce from Chandler. He’s your classic “men should behave like this, women should behave like that” type of personality who leaves no room for his wife to grow or discover happiness. Some of his actions in this movie, including having a mole track Blanchett/Mara and record their intimate periods later in the film, are utterly despicable.

For Blanchett’s life experience and family issues, Mara is the opposite. Naïve, breathtakingly innocent, and unclear of her identity, Mara works in a toy shop and has aspirations of becoming a photographer. While she starts Carol with a boyfriend, it’s obvious she has limited interest in him and an attraction to Blanchett is immediately established. The duo begin their romance by Blanchett ordering a train set from Mara’s store and forgetting her gloves upon exit. When Mara mails them back, the pair have lunch and connect with chemistry from the beginning. 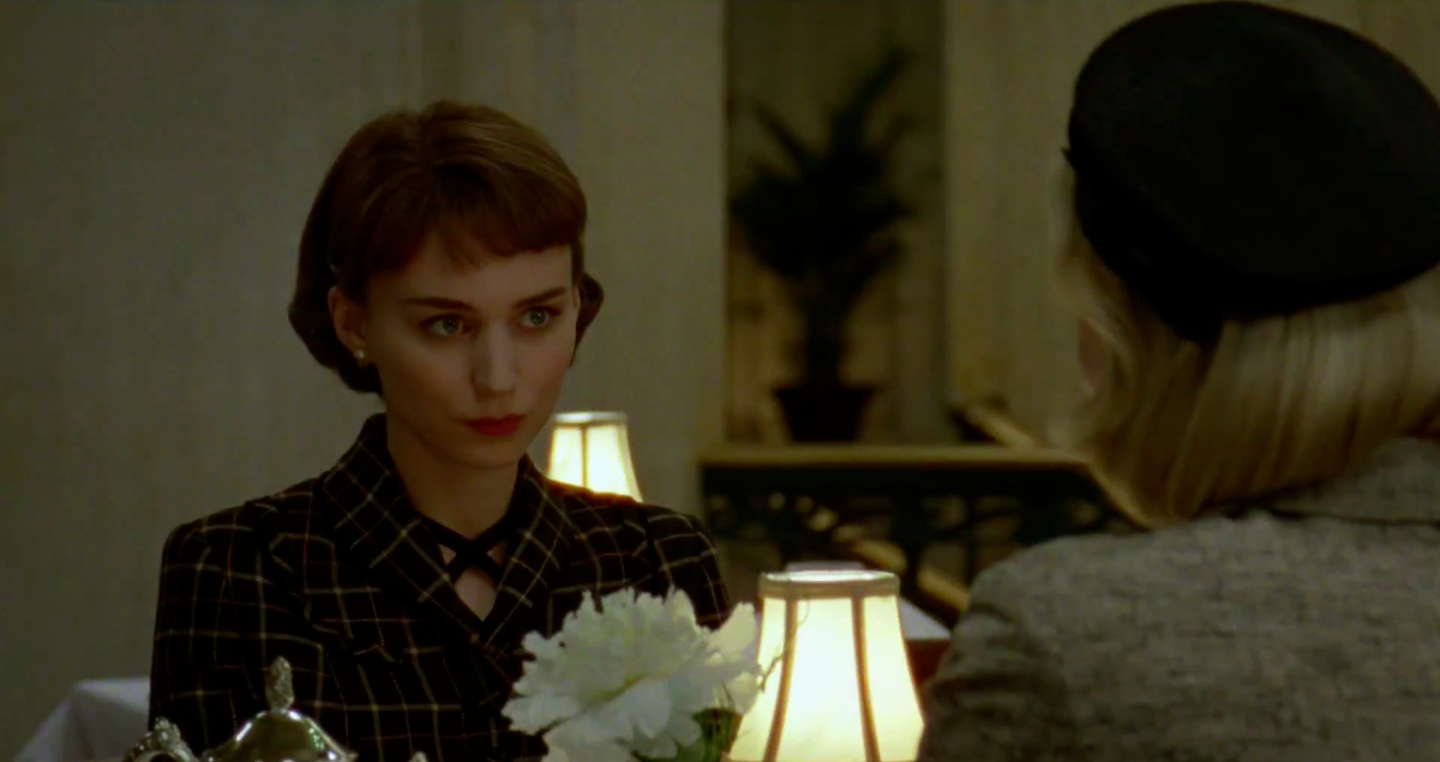 Throughout Carol, the chemistry from its leading ladies is special. Blanchett has a certain grace and eloquence in her role that could make noise during award season. Mara is equally great in every facet, but the titular character is one of more depth than Mara’s. I would take no issue in either actress receiving hardware for their turns in Carol. They form a beautiful relationship that’s understandably difficult to maintain in their repressive 1950s climate.

Allow me to expand on an earlier point. Women already had it difficult enough compared to men during this time, but once it becomes known in Carol of Blanchett’s attraction to other women, the situation brings messiness. Being both a female and one attracted to other females creates issues for Blanchett’s divorce, particularly in her desire to have custody of her and Chandler’s daughter. A “morality clause” is referenced by Blanchett’s attorney – the idea being that individuals in same-sex relationships have an inability to properly parent a child. Meritless and outdated ideas such as this have thankfully lost their place among sensible people, but we’re talking about the 1950s here. Chandler would rather make his wife live in hell than be independently happy with the person she loves, and the court agrees. 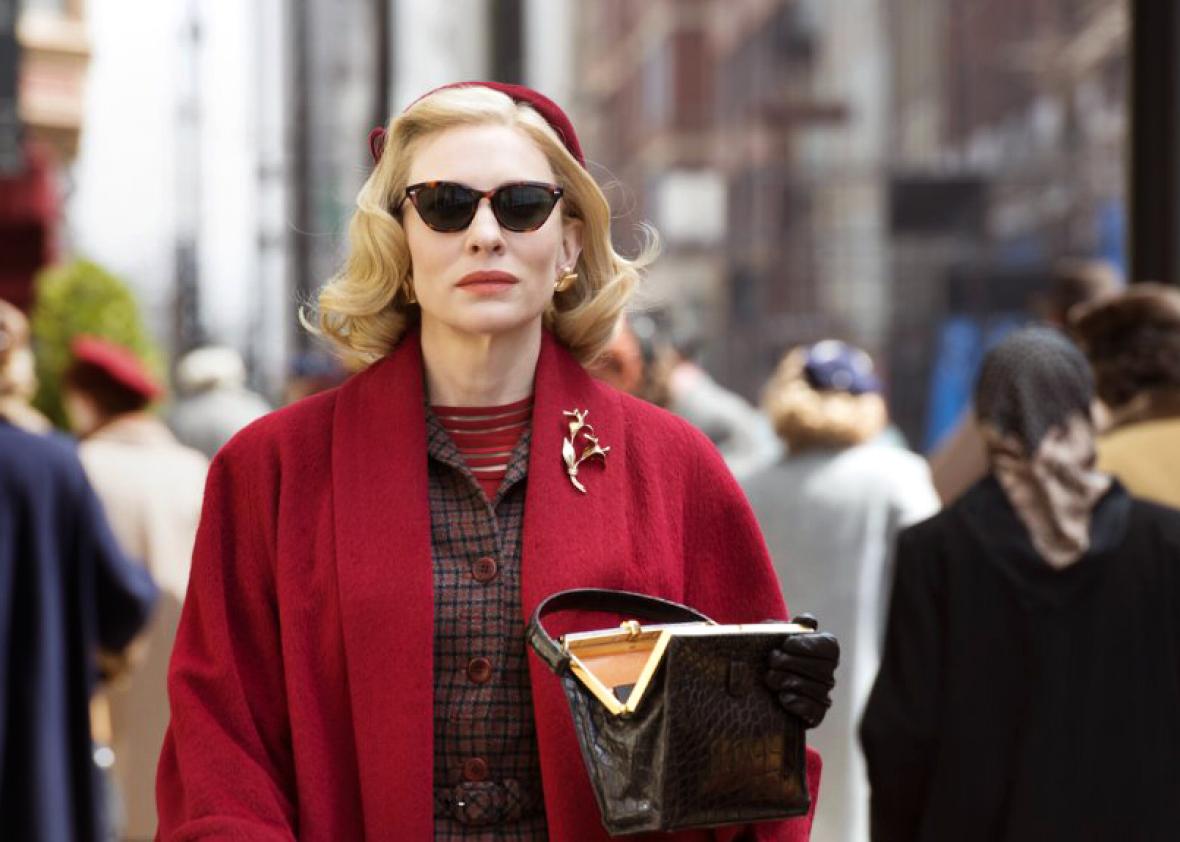 The eventual resolution doesn’t come with ease. After turning their attractions into a sexual relationship, the aforementioned decision by Chandler comes to fruition. He hires a man to track the newly acquainted couple and give his findings to Chandler. Because of this, Blanchett has to back off from Mara and temporarily break her heart. We enter an unknown period here as an audience, hopeful the pair can rekindle and be happy, unsure if that will be a possibility.

Blanchett enters psychotherapy treatment (none of which we see on screen) as Mara goes from toy shop employee to contributor with The New York Times. Because Blanchett told Mara not to contact her, there’s initially no back and forth. Mara does call at least once before deciding to move on. Part of the strength behind their performances is the restraint and dissatisfaction they have to show. In an ideal world, they would simply be together without any external difficulties. But societal, familial, and uncontrollable factors make them create distance, and there’s a definite sadness to acknowledging that. In the midst of the undeniable love present, there’s a struggle. Ignorant people in Carol, sadly the norm and general consensus during the time, make love nearly unobtainable for couples branded as different.

Fear not, though, lovers of a happy ending. Mara overcomes her broken heart and Blanchett refuses to live as someone she’s not. The final scene of Carol is the duo sharing prolonged eye contact in a restaurant – Blanchett had been unsure if Mara would even show up, and Mara was hesitant about whether or not to attend. The implication to have is that past issues can be buried by Blanchett/Mara and a romantic relationship can be embraced. Again, Carol will not appeal to all movie watchers, but for those who are a fan of either actress or appreciative of profound stories directed with delicate detail, give this one a chance. It’s a rewarding journey to witness.