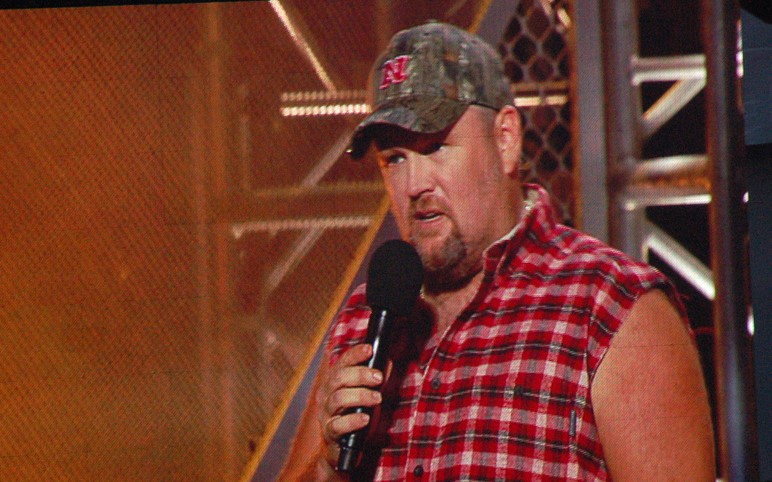 ORLANDO, Fla. – Larry the Cable Guy doesn’t care that he stinks at golf.

“I can hit the ball great on the driving range,” the 52-year-old comedian said, “but when I get on the course, something happens.”

What happens is fairly obvious.

Larry (whose real name is Dan Whitney) does what he does best: Entertains.

He talks with fans. He jokes with his playing partners. He signs autographs and poses for photos. He might even say his trademark “Git-R-Done.”

So pardon him if he bogeys a few holes at a charity golf tournament this past weekend in Orlando, or hits the ball in the rough.

His caddie said it succinctly: “Thank goodness Larry keeps score in pencil. It allows him to use that eraser over and over again.”

But Larry didn’t care. He once again had a ball. And he’s going to play a few more charity golf tournaments over the next few months.

“I just love all the interaction with the fans,” he said. “This event helps raise money for the kids. That’s why I do it.”

Pop Culture Spin sat down with Larry for a few quick hit questions.

Pop Culture Spin: You fly in from your home in Nebraska to play this golf tournament and you already are planning your stand-up comedy tour with Jeff Foxworthy. You’ve made it. Why do you still hustle?

Larry the Cable Guy: “I just love what I do. I love the crowds. I love that people are enjoying themselves. You know that I’m a home body. When I’m not working, I’m home. I never go anywhere. So this is fun to get out and do stuff.”

PCS: We’re doing a series on stand-up comedians. What do you think about the stand-up game today?

Larry: “Anytime you do stand-up, I respect you. And I respect the comedy, all kinds of comedy. You’re just out there hustling. You’re doing it. You’re getting the crowd involved and making people laugh. I’m with you. It’s a tough business. Anybody that’s doing it, it’s awesome.”

PCS: What do you tell young comedians trying to get in the game?

PCS: What has Jeff meant to you?

Larry: “He’s one of my mentors. He taught me how to stay late to sign everyone’s autograph. He showed me what it takes to be at the top of your game. He’s always been interactive with fans, and so am I. He does it because he likes it. I really like it too. Jeff is a hard worker.”

PCS: Besides Jeff, who are some of your favorite comics?

Larry: “My favorite is Nick DiPaolo. I also like Colin Quinn. Both are buddies of mine. Colin has some really funny specials.”

PCS: Do you still get nervous when you get on stage?

PCS: Is there anything you haven’t done that you’d like?

Larry: “There is not really anything. I’ve done more than I thought I ever would. Anything else would just be icing on the cake.”

Lynn Hoppes has been covering the entertainment business for years, including major parties, movies, album releases, shoe releases and a host of others.