Trending
You are at:Home»Celebrities»Steve Byrne Talks Comedy, Life on the Road, and More in PCS Interview
By Lynn Hoppes on January 26, 2016 Celebrities, Comedy, Interviews 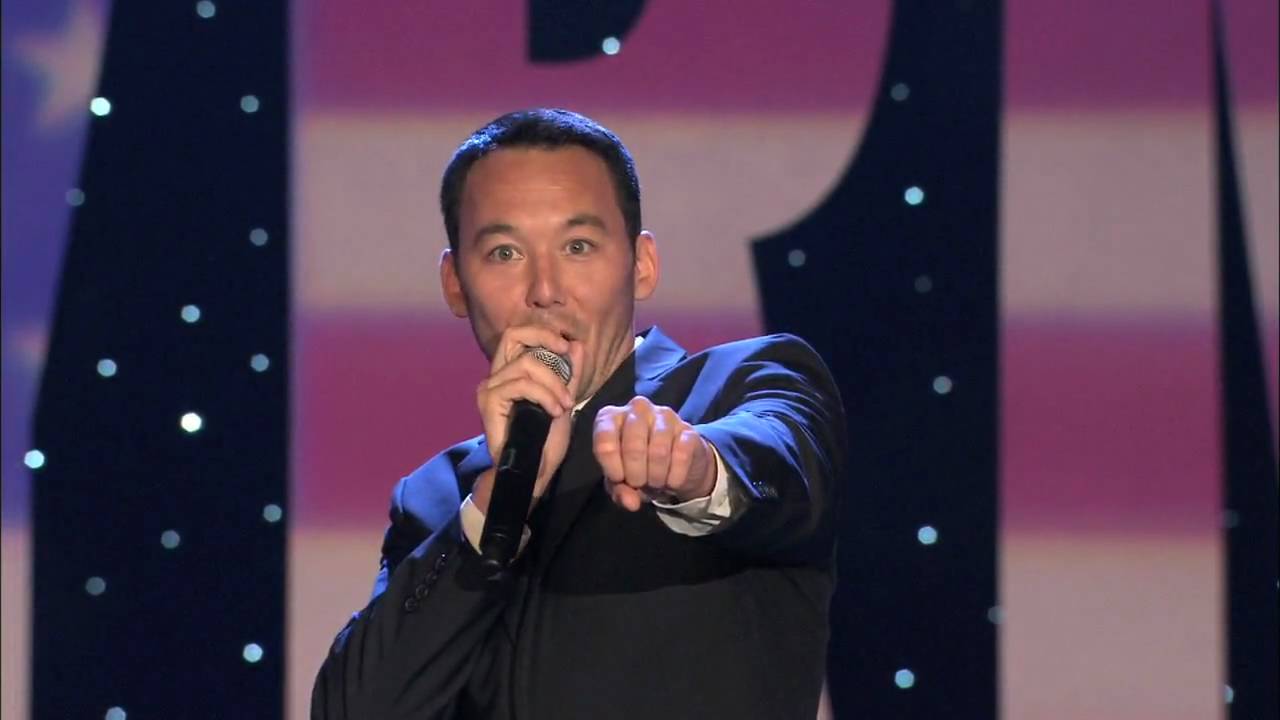 Pop Culture Spin chased down the hustling comedian Steve Byrne, who has logged more than 2 million miles on the road, before he headed to Canada for gigs this weekend.

We thought he’d be a good person to talk to about our love of stand-up comedy.

Byrne, who has been working steady for 18 years, has performed everywhere. He had a successful sitcom on TBS and he’s done several specials on Comedy Central (and set to film his next one in a few weeks).

“Stand up is a marathon …  You’ve got to keep churning out material, stay relevant and with that comes ‘your voice’,” said Byrne, who was born in New Jersey and now lives in Los Angeles. “A comic’s voice is ultimately why people pay to see that particular comic, so it’s not a matter of keeping fresh, it’s a matter of that comic continuing to put pen to paper, challenging themselves and keeping their audience entertained.”

PCS stopped Byrne long enough to ask him a handful of questions:

How different is it to be a comedian today than years ago?

“It’s not the party is was every weekend.  I’ve got kids now.  I’ve got a wife.  Before, it was show, girls, booze, fun, bad food, hook up, repeat,” he said. “Now, it’s more focused on the show.  How can I be the best comic I can be.  I take it so much more seriously than I did 10 years ago.  I write a hell of a lot more.  I appreciate the opportunity I have so much more each night to entertain people.  I love my job, always have but nowadays, I want to craft the best hour I can every 2-3 years instead of saying what I need to in front of 300 people hoping to get laid.  I’ve grown up a lot.”

What is your routine now then?

“Well, it starts with the first flight out of LAX.  Usually around 6-7 am.  I fly out early in case there’s delays or weather, I have 3-4 more chances of making it to the city I am heading to.  Then at the gate, it’s just praying I get an upgrade to first class.  Then I land and it’s nap, show, sleep, morning radio, nap, bad road food, show, slumber for 12 hours, bad road food (Arby’s, Pizza, local greasy spoon, etc.) show, whiskey, more whiskey, Denny’s/Waffle House, wake up hungover, get to airport (barely), wonder if TSA or American Airlines won’t let me board because I smell like Jameson Whiskey and Moons Over my Hammy, pass out in exit row, wake up in LA and explain to my wife and kids why Daddy looks like Nick Nolte’s mugshot.  Hang out at home Sun-Wed and repeat the process on Thursday at LAX.

How much new material do you provide and are you always writing?

“Well, since I’ve been at this and I got my first break, I’ve pumped out specials since 2006 with my Comedy Central 1/2 hour Presents, in 2008 my first hour, ‘Happy Hour’, 2010 was ‘Byrne Identity’, 2013 was ‘Champion’ for Netflix and I’m filming my fourth hour in early February in Chicago.  I’ve been pretty steady in trying to stay relevant and challenge myself as a comedian. If you don’t keep writing as a comedian, you’re going get really depressed.  I’ve seen it happen.  It’s like being a factory worker at a conveyer belt.  The first few years, it’s tolerable and as the years go on, doing the same job over and over again, it gets depressing, so you can go that route, or you can challenge yourself to change it up every now and then.   That’s the route I’ve taken.  Whether you like a special I’ve done or not, at the end of the day, I’ll have a body or work to look back on and know I gave it my all.  In each hour, there’s at least 3 jokes, I’m incredibly proud of.  Much like a band will have a few hit singles per every record.  I want a killer greatest hits when I’m in a rocking chair.”

Amy Schumer got some heat last week for allegedly stealing some jokes. How hard is it to keep fresh while not trying to be like someone else?

“Well, first off, these days, everyone hears a comic do a joke and then there’s a similar premise or take on a premise and that fan will think, “he/she stole it!!!”.  There isn’t a database of jokes comedians can look to and know every single joke.  It’s ridiculous.  I know Amy, I know Kathleen Madigan, I know Wendy Liebman and I know Tammy Pescatelli.  They’re all incredibly talented comedians and you don’t get to headlining the country by being a fluke.  They’re all killers.  I personally don’t think you can work professionally as a comic all these years, stealing and not have it catch up to you.  You’d never make it past the clubs if it were the case, so in my opinion, I’ve never known or heard of Amy stealing.  I think there’s an enormous amount of attention directed at her with her successful run she’s had and with that comes scrutiny and someone is in the wings looking to take the homecoming queen down a peg or two.  She’ll overcome it and I believe that the other ladies will be just fine as well.   Love ’em all.”

Who are some of your favorite comedians you’ve toured with?

“I’ve toured with a lot of great comics but I’d have to say the guys from ‘Sullivan & Son’.  It was a band of brothers.  Roy Wood Jr., Owen Benjamin, Ahmed and I were on a summer show on TBS and nobody gave us any attention, no late night talk shows, no press outlets, nobody.  Nobody.  But we were 3 comics on a TV show and we wanted to do all we could to keep that going.  So on no budget, we toured, shared hotel rooms, rented cars and it was awful but it was the greatest.   We had a blast.   We were on TV and we got to tour together.  We had a traveling party for three summers in a row and I loved every second of it.  It was us against the world, we were determined to do all we could to let folks know about us.  I will always love those boys for that.  Always.”

You touched on “Sullivan & Son” on TBS, one of the few shows ever led by an Asian American. What did you think of that experience?

“I loved it but it was a mixed blessing.  To this day, “Sullivan & Son” was the most fun I have ever had professionally.  I loved the writers, the cast, the crew and working with my best friends Peter Billingsley and Vince Vaughn.  Everyday I went into work, it was so damn fun.  It truly was a family.  We still all text and call each other.  Being in the writers rooms made me a better comic and appreciate television on the whole.   I will always cherish the experience.  The downside is that I had this perception that I may garner more attention in my career and that truly never happened. Over the course of those 3 years I was on a television show, that I created, wrote and starred in I got one late night talk show appearance, in 3 years, and no press.  I was a on show as an Asian American lead and no one gave us any love.  None. All this talk about diversity and here we are the most ethnically diverse cast on television and nothing.   It had been 15 or so years since Margaret Cho’s ‘All American Girl’ and we got a show on the air with three Asian Americans on an ensemble show and nothing.  Nothing.  That really, really hurt.  But all  that negativity gave way to challenging myself to get better.  I never wanted to point fingers at anyone, I just thought I need to get better and get to the point where my work truly is undeniable.  So I never resented anyone else for the lack of chances, I just decided, it’s up to me.   Let’s start all over again, and just kill it.   That’s why with the clouds parting, the love of my family, wife, kids, I brushed myself off and said, ‘Let’s get to work’.”

You’ve said Asians are the forgotten minority. What does that mean?

“Listen to politicians speak, they always mention reaching out for the Christian (white) vote, the black vote, the latino vote and I have never heard “the all important Asian vote”.  When I hear talk about diversity in Hollywood, it’s always black or latino, never Asian.  Have you ever heard, it’s time for an Asian James Bond?  Uproar over not one black female on SNL but have you ever seen one, ONE, Asian cast member on SNL?  Rob Schneider?  Does he count?  I don’t know.  Asians don’t really have a footing but look at the end of the day, it comes down to $$$ and numbers.  If the Asian population in this country gets behind a movie, or a show, or a band or a movement, they can slowly put themselves into a national conversation but Asians for the most part do keep to themselves.   My mother is from ‘The Hermit Kingdom.’  I do believe it’s getting better though.  Margaret Cho is the Asian Richard Pryor, she’s the first to break through.  Then you see the run Bobby Lee has had all these years, Ken Jeong has been killing it the last few years and Randall Park is not too far behind him and the K Town Cowboys have been on a tear lately too by creating and funding their own indie film.   I think as long as Asians take the initiative to create opportunities for themselves as opposed to waiting for someone else to give it to them, they can start to become more and more part of the national fabric.  Simply put, it’s up to us.”

Lynn Hoppes has been covering the entertainment business for years, including major parties, movies, album releases, shoe releases and a host of others.