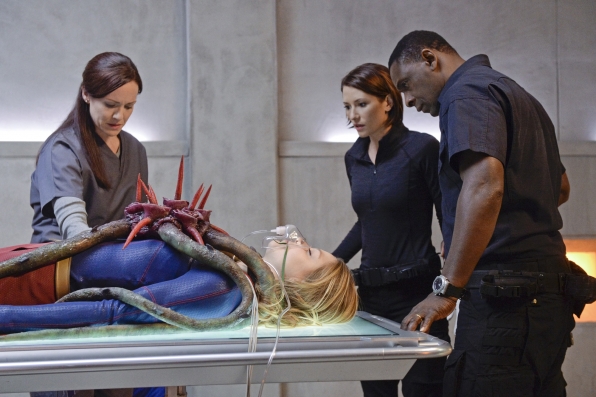 After Supergirl’s cliffhanger last week, it was a little disorienting for Kara, as well as us viewers, to have the episode seemingly pick up somewhere else. However, it didn’t take long for last week’s monster to be revealed as a Black Mercy, a telepathic plant-squid hybrid that traps its host in its dream world while it (presumably) feeds off it.

The Black Mercy is borrowed from a classic Superman episode similarly entitled “For the Man Who Has Everything.” While I haven’t seen the Superman episode that inspired this week’s episode of Supergirl, I have seen the Supernatural episode that also rips off the same story. And though Supergirl’s attempt at this familiar storyline has its own good points, as I watched the episode I couldn’t help but think that Supernatural pulled it off much better.

With Dean and Kara both trapped in their respective shows, Dean’s struggle to accept reality was much more emotional, and therefore way more captivating for viewers. As soon as Dean wakes up in his virtual reality, he knows it isn’t true, but he also doesn’t fight it. He would rather stay in a place he knows is fiction because at least in this new place his mom is alive.

Kara on the other hand also wakes up aware that things aren’t right, but she immediately decides that she wants to go back to real life. I would have preferred to see Kara struggle the way that Dean did, with self-awareness but also desire to stay anyway.

Another way that Supergirl’s rendition fell flat was that the episode spent so little time in Kara’s dream but instead spent most of its time outside it where Alex, Hank, James, and Winn were trying to get Kara back. That’s part of the reason this episode, which should have been heartbreaking to watch, felt so detached. We didn’t get to spend enough time with Kara in her dream watching her continue to struggle until she got to the point of complete acceptance.

Kara’s total 180 after what we assumed were days that had passed inside her hallucination was the only thing that saved the story. Seeing Kara have completely forgotten about her regular life filled me with sympathy for her that had otherwise been lacking throughout the the episode. I only wish we could have spent more time in her new reality to watch her get to that point.

I feel like the writers think that since Cat is such a popular character that means she needs to be in every episode. I wish that they’d decided not to include Cat in this episode so that they could have spent the time in Kara’s dream that was instead wasted on doing nothing new with Cat. Though as usual Cat’s scenes were saved by her one-liners.

Some other high points of the episode that happened outside of Kara’s consciousness was that sense of family that Supergirl is always so great at delivering. One of my favorite themes of Supergirl is that the family you choose is just as important as the family you’re born into. There was so much of that theme throughout this episode with Winn and James there by Kara’s unconscious side, and with Hank’s dad-like overprotectiveness of Alex and Kara. It’ll be interesting what dynamic this lands the three of them in once it’s revealed that Hank covered for Alex after she killed one of the last members of Kara’s real family.

Overall it wasn’t Supergirl’s worst episode by a longshot; I mean we did finally get to see Superman’s face, after all. I do believe that it could have maybe been broken up into two episodes, one that focused mainly on Kara’s struggle within her virtual reality, and one that dealt with the ensuing battle once Kara got free. And though this episode didn’t live up to its Supernatural counterpart, it definitely managed to hold its own.