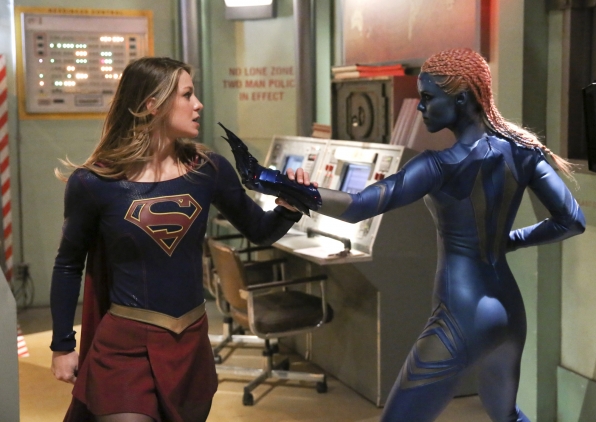 I have mixed feelings about this week’s episode of Supergirl. I mean, there was a Harry Potter reference, a glimpse at the Fortress of Solitude, and one of the dirtiest jokes of the show. But there was also so much going on and so much of it was the equivalent of Chris Rock’s twentieth #OscarsSoWhite joke (ie: overplayed).

This week’s monster of the week was a knock-off Mystique – I challenge you to make a drinking game out of how many reviews make a similar joke. While Mystique, sorry, Indigo’s presence was supposed to be some super hyped and exciting cameo of the former Smallville Supergirl (Laura Vandervoort), her appearance was overshadowed by a mediocre storyline.

Indigo herself is a pretty interesting villain. She travels through technology with basically zero laws of physics applying to her, and she has ties with Non as his ex-whatever. Most interestingly, Indigo is behind Kara’s pod finally making it out of the Phantom Zone. With so many cool aspects to Indigo it’s a shame that the writers decided to go with the much overdone “oh no a nuke is headed towards our city” plot. Not to mention, Winn’s oh so convenient virus was an even more predictable fix.

Luckily Indigo, unlike the rest of the various monsters-of-the-week that visit National City, will be back. Hopefully she’ll have a chance to redeem herself with an innovative threat. Due to her now forced involvement with Non, we might be in luck.

After last week’s very successful episode about ethics, this week’s Supergirl episode felt a little redundant. This week’s theme, honesty, piggybacked last week’s by introducing an Ashley Madison-esque scandal into Kara’s universe. It was an attempt to be relevant and edgy, but just like the other plot devices, it felt outdated.

The hope of adding this storyline, however, was to finally get some closure to conflicts from previous episodes, namely James’ lie to Lucy and Alex’s to Kara. Both characters have been struggling with lying to the people they love for quite some time now, and the Ashley Madison scandal seemed to be the catalyst for them to finally tell the truth.

While Kara had been mad at Hank for weeks now, as soon as Alex told her that she was actually the one that killed Astra, Kara hugged her sister. While this was a sweet family moment, especially once Kara held out her hand to Hank, it felt utterly unbelievable. I’ve been mad at my own sister for worse, and like I said, Kara was so mad at Hank that she quit the DEO. Plus, Alex has been lying to her for weeks! If anything be mad at that. But Kara’s a sweetheart, and she loves her sister, and it means that we don’t have to spend weeks waiting for their eventual reconciliation.

Instead we can spend the next few weeks waiting for James to finally do something about Kara. After Kara talks to Lucy about James, in which she spills the beans about how close they really are, Kara agrees to let James tell Lucy about Supergirl’s secret identity. Unfortunately, Lucy beats him to the punch and breaks up with him instead. Hey, that’s one way to get out of having to tell the truth, I guess.

Lucy’s ignorance has been bugging me for quite some time now, and it was time for her to realize how close Kara and James really are. Not to mention, it was time for James to finally quit lying to himself, something that Lucy definitely realized. I’m interested to see how this plays out now that Winn’s got his eyes on someone else, and Adam (can’t forget about him) has disappeared without a mention in weeks.

Back to Winn, real quick. To be honest, I’m not a big fan of him and Siobhan together. Not only because I know that eventually she’ll be taken out as that week’s big bad, but also because after years of Winn pining away after Kara he needed someone nice. Not someone who’s going to make out with him and then pretend men under six-feet don’t exist again. Plus, it seemed to come out of nowhere, and felt a little forced. I hope it doesn’t blow up in Winn’s face.