Trending
You are at:Home»Television»Review: ‘Once Upon a Time’ S5 E12
By Jeanie Weber on March 8, 2016 Television, Television Reviews 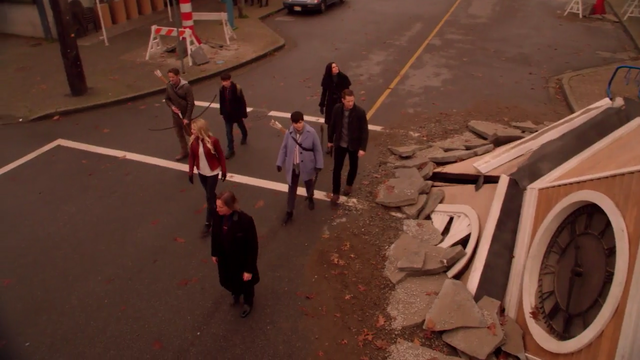 It has been a long couple of days, so much so that I almost forgot about the return of Once Upon a Time, which is my favorite show. I know, crazy talk. Luckily, my just as obsessed but more time-conscious coworker reminded me, leaving me with just enough time to sneak in a belated viewing while on break yesterday. While I got to watch Emma and the gang travel to the Underworld, my coworker got to watch my reactions, which must have been great because the episode sure as shit was.

Though it may have been Once Upon a Time’s one hundredth episode, it didn’t stray too far from the typical Once Upon a Time format – you know the one, flashbacks highlighting a certain aspect of the present. The flashbacks provided a nice break from the constant red glow that the Underworld apparently emits. Turns out the Underworld looks a hell (HA) of a lot like Storybrook, just more broken and fiery.

Flashbacks typically mean another exciting glimpse at Evil Queen Regina, who apparently knew how to force choke? We also got a bit more backstory to her relationship with her parents, Cora and Henry Sr., which was fitting as we discovered this episode that they’d both been residing in the Underworld for quite some time.

I’ve always thought that Henry Sr. deserved a dad of the year award, but as soon as he said that he still loved Regina (even after the body-shrinking and heart-crushing) I got goose bumps. By the time that Henry Sr. and Jr. were introducing themselves I found myself fighting hard not to cry at work. It was definitely one of the most touching moments of Once Upon a Time in a while, and I was happy that Regina finally got some closure after killing her father, and that Henry Sr. was able to escape the Underworld to a better place rather than a worse one.

The most exciting takeaway from the episode, however, was how many characters appear to be returning to Bizarro Storybrook (there I go, referencing one of my other shows). Normally when shows bring back this many characters it can turn out kind of desperate. So far, though, the writers of Once Upon a Time seem to be using this tactic sparingly and wisely. Each character has a legitimate reason to be back, especially as Regina points out that a lot of them are there because the gang put them there.

So far we’ve not only seen Cora and Henry Sr., but also Peter Pan and James (David’s twin), and though we didn’t see Cruella herself, we saw her car. Not a single one of these reappearances seem desperate, in fact, I’m excited about the prospect of each and every one.

Peter Pan was one of my favorite characters to appear on Once Upon a Time, and I’m honestly a little nervous to see how his request to return to the world of the living is going to turn out. Peter usually gets what he wants. It was also hilarious to see James kiss Mary Margeret, only for her to casually not mention the makeout to his twin/her husband. Awkward. But what I’m most intrigued to see is how Emma and Cruella’s eventual face off will end now that Emma isn’t dark anymore.

The only return that I had mixed feelings about was Neal’s, which I guess wasn’t technically a return, only a detour? While I was ecstatic to see Neal again, it felt weird for him and Emma to have such a romantic moment when she should have been focused on Hook, you know, the person she went to the Underworld for in the first place.

The gang hasn’t made much progress on their quest yet, because while they caught a glimpse of Hook in whatever layer of Dante’s Inferno he appears to be in – which by the way, did anybody else catch that sweet parenting moment when Regina tried to block Henry’s view of Hook’s mutilated face – they still have no clue as to where he actually is.

Not to mention, it seems that the gang’s about to get a little sidetracked from Operation Firebird (a fitting name). Now that they know that every soul in the Underworld can be saved, it looks like they’re going to try and right some wrongs, and save some souls that they put there. I love the idea that each tick of the clock, which has always had a big symbolic role in Storybrook, is a soul leaving the Underworld.

After spending all episode waiting for a hint at him, Cora finally leads us right to his lair and of course Cora’s working with him. While the introduction of his character was exciting enough (I love me some Hercules), I was initially disappointed that the essence of his character, the blue flaming hair, was missing. But Once Upon a Time is never one to disappoint with Disney characters, and saved the reveal for the last second. Consider me pumped for the rest of the Hercules characters!