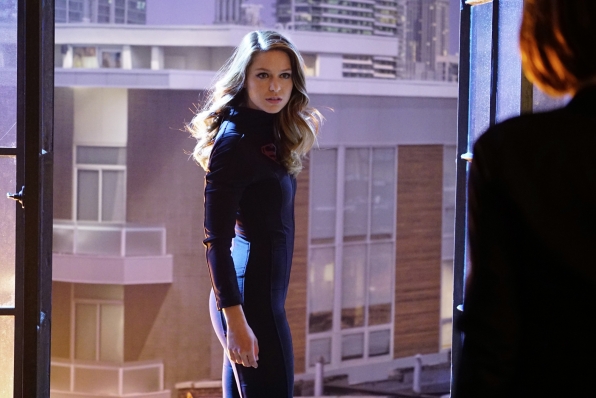 The internet is abuzz calling this week’s episode of Supergirl the best episode of the show. And I know that I’ve said that before, but it looks like I’m going to have to say it again, because I wholeheartedly agree. Not only did I laugh out loud five times and gasp harder than I have since season four of Pretty Little Liars, but this episode was also the first to finally shake things up a bit.

At the very beginning of the episode the DEO sends Supergirl to help out with a fire. Why is the DEO concerned with a fire? I have no idea. Nevertheless, at the scene of the fire Supergirl stumbles upon a mysterious red rock (obviously Red Kryptonite). As she walks by it her face veins get all red – which I can only take to mean they recycled some of the CGI they used for Bizarro Girl – and she goes back to work like normal. Except for the fact that she’s now the new and improved, badass Kara.

I’m just going to hop on up to the bandwagon, because I, like most everyone else, loved Red Kryptonite Kara. Red Kryptonite is supposed to affect Kryptonians differently, and the way it affected Kara was definitely a welcome change for her. Her new clothes were envy inducing, as was her head-turning entrance of every teen girl obsessed with chick flicks’ dreams. Red Kryptonite Kara took risks and said what she wanted. Even Cat was somewhat impressed.

And then it took a turn. Kara and Alex fought, and Supergirl threw Cat Grant off a balcony. People definitely started to notice something was wrong – at which point I started to question how Cat hadn’t put Kara’s brazenness and Supergirl’s temper tantrum together to come to the obvious conclusion. The DEO, encouraged by Senator Crane, had the make the tough decision to take down Supergirl, who had at that point become an alien threat.

J’onn J’onzz was eventually the one to do the taking down, because while Supergirl was coming dangerously close to hurting her sister, the rest of the DEO agents were for some reason trying to use bullets against her?

Hank’s public transformation into J’onn J’onzz was one of the most badass scenes of the show, followed by his and Kara’s subsequent fight. Unfortunately this means that J’onn/Hank is now in lockdown at the DEO being held by Senator Crane, who not too long ago had been making googly eyes at him. I’m still stuck on why exactly Hank didn’t run, as well as why him being an alien automatically makes him a criminal. He saved National City from Red Kryptonite Supergirl, didn’t he?

Now that Kara’s back to being boring old, regular Kara, I hope that she can take some of the good aspects of her Red Krypotonite-fueled confidence to finally start asking for what she wants. While not every action led to stellar consequences, it was great to finally see Kara stand up for herself for once.

Even better, the consequences of this episode were, for once, not neatly wrapped up in a little bow by the end of the episode. Yes, I like the Supernatural/X-Files-esque monster of the week episodes, but even those shows knew that they had to throw in a story episode, or have an enduring consequence every once in a while. Otherwise the show gets too predictable and cookie cutter. Luckily, the past few episodes, and especially this one, seem to finally be breaking out of this shell by introducing what Supergirl had been lacking in the past: conflict and challenge.

Kara and Supergirl alike made a lot of enemies this week. Kara ratted out Siobhan, which quite frankly, she deserved. Unfortunately, I don’t anticipate Siobhan seeing it that way; that one incident, as well as scenes from next week’s preview, definitely hint at Siobhan’s (for once) slow transformation into the Silver Banshee. Meanwhile, Supergirl’s got a lot of apologizing to do to the people of National City, who were REALLY quick to denounce their hero.

Most importantly, Kara and James finally have to figure their shit out, now that Kara has finally said what they’ve both been thinking all along. Honestly, it’s looking like James can’t handle a confident woman, and if that’s the case Kara is better off without him.

I’m sad to see Red Kryptonite Kara go, but excited for the challenges that are ahead of her. She’s got a lot of work to do, and I’m assuming not all of it will be easy. Luckily, that means more good TV for us.