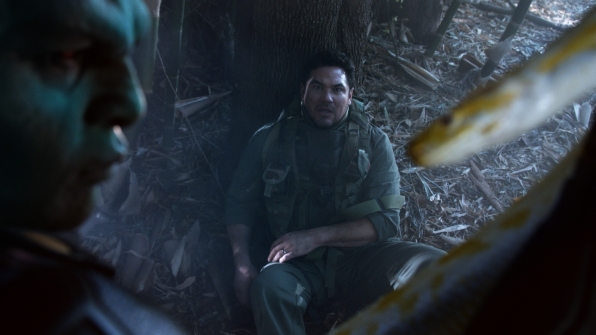 While Supergirl has been enjoyable from the start, it seems that the show has finally found its stride, with yet another amazing episode that did not disappoint. Most of Supergirl’s earlier episodes were good, not great, but, as of this week, I have officially lost count of how many back-to-back episodes have surpassed my expectations.

After last week’s game changer, this week’s episode of Supergirl could have fallen towards the boring side. While the episode did have its slow moments, it managed to keep up the pace the show has been working with the past few weeks.

Some of the episode’s slowest moments were even some of its best moments. I wasn’t a huge fan of the interrogation scenes, partly because any time Colonel Douchebag (aka Colonel Harper) opened his mouth it made my blood curdle. However, the interrogation scenes allowed for some really awesome flashbacks – and as Pop Culture Spin’s resident Once Upon a Time reviewer, a show which is 50 percent flashback, I’m a flashback expert.

Each of the flashbacks gave us a cute little glimpse into our favorite characters’ pasts; before they became the people we know them to be. We saw Jeremiah and J’onn J’onzz’s first meeting and quick friendship, followed by J’onn’s famous promise to keep Jeremiah’s girls safe. We also caught a glimpse at an Alex very unlike the one today—a wild child who needed some direction in her life, which just happened to come in the form of one new and improved Hank Henshaw.

And though Kara’s flashback wasn’t a part of the interrogation sequence, it’s worth a mention if only for Malina Weissman’s stellar performance as young Kara. We got some more insight into how difficult it was for Kara to be on this new planet, trying to fit in. We even got to see how she came to be in possession of her glasses, which by the way are lead framed, which explains why she always seems to squint over them when attempting to use her powers.

It didn’t stop there, though. Shit got even more real with Kara’s decision to finally reveal her true self to Lucy in an attempt to get her help. After convincing Lucy of Supergirl’s and J’onn’s innocence with her aforementioned touching flashback, Lucy and Kara decide to take a page from The Fast and the Furious and get on some motorcycles to go save J’onn and Alex.

I mean, I feel like Lucy, being a lawyer and all, probably could have found a more legal way to do this. You know, one that didn’t involve Alex becoming a fugitive. But I guess yay? The only thing that worries me is how they’re going to keep J’onn and Alex constantly involved in the plot (following their infiltration of Project Cadmus) now that they’ll constantly have to be on the run.

Just when you thought things couldn’t get any more exciting in one episode of Supergirl, two big revelations were made. The first was that Jeremiah, Daddy Danvers, was alive and being held at Project Cadmus. In J’onn’s flashback we were shown what was supposed to be Jeremiah’s death, but it looks like the lovely people at Project Cadmus allowed it to look that way to his family so that they could go about performing experiments on him. Very X-Files-y.

The second revelation was a separate one all together. All while Alex is being interrogated, arrested, and saved, Winn and Cat have been dealing with one very angry ex-employee. Siobhan, fueled by Winn’s instructions to “find a goal” decides to make her goal exacting revenge on Kara. Winn finds her out, though, and gets on her bad side by ratting her out, just like Kara. Unfortunately, her bad side is not a side it turns out you want to be on.

Comic and spoiler fans alike have known for quite some time now that Siobhan would some day become Silver Banshee. But it wasn’t until this week, when Siobhan drunkenly fell off a building only to save herself with some super screaming, that we finally got a peek at her powers. Whether these powers are new to Siobhan as well, or just expertly hidden, I guess is something that we’ll find out next week on.

Until then you can find me trying to catch up on The Flash, because next week is finally Supergirl‘s crossover episode.