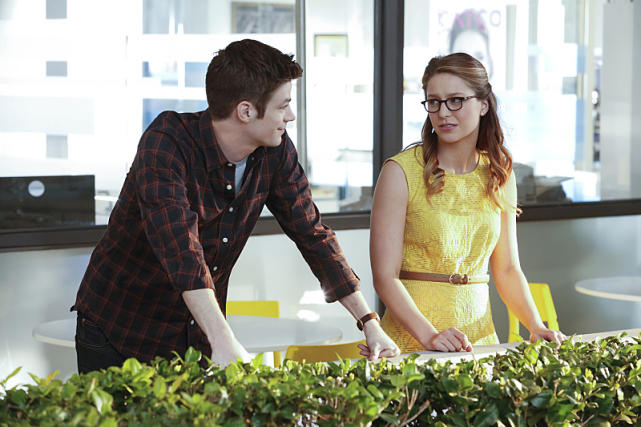 It seems that this week was all about comic book team ups, with not only Batman and Superman, but also, Supergirl and the Flash joining forces to make their respective duos. While both the big screen and small screen crossovers were highly anticipated, only one truly met all the hype. Luckily for me (and I guess a bit unluckily, since I also happened to catch Batman vs. Superman), Supergirl came out the winner.

I had almost forgotten about the Flash’s involvement in this episode, so that when Kara fell out the window I was scared how she was going to pull off saving herself. There couldn’t have been a better way to introduce the Flash to the story.

Grant Gustin certainly held his own next to the always charming Melissa Benoist, which I’m sure was a tough feat. But the two seemed to have wonderful chemistry; especially given their characters’ shared dorkiness and quick wit.

I haven’t caught any of the Flash’s other crossovers, but Kara and Barry seemed to fit perfectly together. It was definitely WAY better than (spoiler) Batman and the Flash’s meeting (don’t know if you caught that, but it was clearly not Gustin, and trust me I’m still bitter).

Back to the matter at hand, though, Kara and Barry were two peas in a pod. So much so that James got a teeny bit jealous. Which was definitely deserved, because, and I promise I’ll only say this one last time, Kara and Barry were so cute together! Her “YES” when he surprised them with ice cream—gold. It really is a shame that the writers went the route of an alternate universe, because I would have loved for them to be superhero pen pals.

However, they weren’t the only duo that paired up on this week’s episode of Supergirl. Siobhan (after learning about her bizarre family curse) accepts her new role as a supervillain, and decides to bring back a previously discarded one with her: Livewire.

I’m not sure why, but I thought I remembered Livewire looking cooler. However, this time around, she looked cheap. Her wig? Yikes. And then there was Siobhan’s makeover that, I’m only assuming, was Leslie’s suggestion. I get that they were going for comic book accuracy, but can you imagine the time it must take to do that kind of face paint? And then we’re supposed to believe that Siobhan intended on applying it every time she wanted to go on a killing spree?

But the two didn’t make a bad pair, and together they made an interesting joint adversary to the Flash and Supergirl. The fight in the park was a little lame, especially when it came to the dialogue – I believe “I hate helicopters” was supposed to be a funny reference to Livewire’s origin story, but instead it fell somewhere between awkward and obscure.

I was a tad disappointed that, yet again, they got rid of the bad guys (girls, rather) so quickly, especially since they’d already done that to Livewire once before. Speaking of which, I’m still confused as to what this new place they locked Siobhan and Leslie in is exactly.

Nevertheless, Supergirl is all about the emotions and the people, and the epic battle was really more of a tool to get Supergirl back in National City’s good graces. The dialogue got a bit cheesy again, and it may have been a shockingly quick turnaround, but it was definitely a touching moment to see mere mortals attempt to protect their superhero.

The big emphasis on the superhero/super villain collaborations didn’t leave much time to focus on any of our favorite minor characters – though we did get some always-welcome Cat Grant love advice straight from her self help book, The Lighthouse Technique.

And even if it was only for a short while, I really enjoyed seeing Lucy in her new role as director of the DEO. She seems to be adjusting well, and perfect for the job. I was GOING to say that I hoped to see more of Lucy and her new job next week on Supergirl, but now that Myriad has turned all of National City into a zombie army that seems pretty unlikely.