Trending
You are at:Home»Television»Review: ‘Once Upon a Time’ S5 E16
By Jeanie Weber on April 4, 2016 Television, Television Reviews 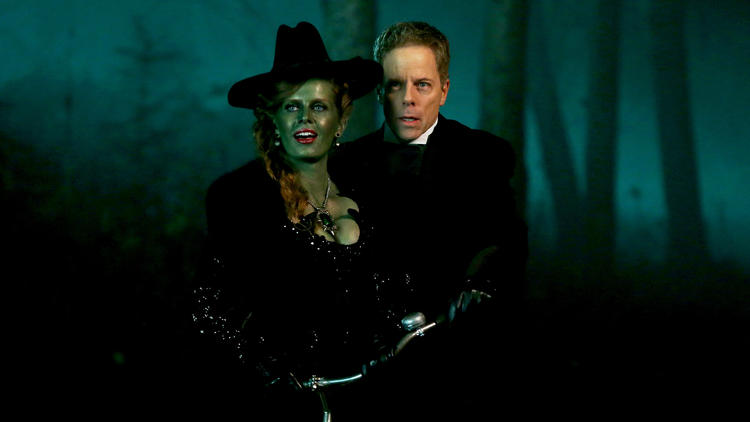 I always knew (and kind of hoped) Zelena would be back on Once Upon a Time, but I never expected it to happen so suddenly – or without any sort of real explanation. But as it happened this week was 90 percent Zelena – and 80 percent let down.

Now, I’ve said before that I actually sort of like Zelena. She’s kind of hilarious and super sassy, even if she’s proved a thousand times that she’s not to be trusted (not that anyone has learned). However, they chose to tie Zelena and Hades’ storylines together by way of a past relationship. If you can count the one day that they spent together a relationship. Which apparently Hades does, because he’s still in looooove with her. Barf.

I’d been hoping that Zelena (who with Regina holds the title of Queen of Sass) could bring out the wit that Hades has sorely been missing during his appearance on Once Upon a Time. Instead she brought out a different thing: feelings. Ew. As a lover of really crap rom-coms I’m not one to usually be opposed to romantic storylines. It’s usually my boyfriend who says stuff like, “get this kissing crap off my zombie show.” But this time I was the one who found myself rolling my eyes throughout every one of Zelena’s and Hades’ interactions.

Hades is the King of the Underworld. He’s supposed to be a bad ass that says stuff like, “he’s a GUY” to a love-struck Megara, not mushy shit like, “my heart fluttered.”

Sure, there is the question whether Hades is just being extra evil and faking it in order to steal Zelena’s spell, like she suspects. Honestly, though, I don’t see Hades going to all the trouble of stealing his story if that’s what he’s doing. I believe that he actually does love Zelena and didn’t want the gang to find out that the King of the Underworld actually has feelings (it was hard to type that without puking everywhere).

It’ll be interesting to see if Zelena finally allows herself to be loved, which is the thing she wants most in the world but has been hurt too many times to actually allow. You know, if I don’t die from the sappiness first.

Zelena’s flashbacks also featured the return of Dorothy, who’s grown up quite a bit since we last saw her. The whole point of the flashbacks was to establish Zelena’s time-travel spell, as well as give the backstory to her and Hades’ relationship. The addition of the scarecrow was an ok nod to her original story on Once Upon a Time, if only for the cool Tim Burton-y aesthetic he had. But having Dorothy come back to Oz randomly was unnecessary to the story and thus felt extremely forced.

So, I did say that this week’s Once Upon a Time episode wasn’t entirely a let down. After Hades uses his blackmail power against Rumple to open a portal and (allegedly) save Zelena’s baby, Zelena, the baby, and Belle join the rest of the gang in the Underworld. This whole scene made me wonder how you make a portal precise to one person or location; had Belle not jumped into the portal with the baby was Rumple’s plan to just hope the baby was the only one close enough to the portal to fall in?

Anyway, hypothetical and magical laws of physics on Once Upon a Time aside, this meant that Rumple and Belle were finally reunited following the realization of her pregnancy and Rumple’s baby deal. Rumple was finally honest, for probably the first time in their very tumultuous relationship. And while Belle was not pleased to learn about her child being sold long before its conception, Rumple made some good points.

Belle chose to love him despite him being both “beast and man.” Belle has always wanted Rumple to be a better man and to do right by her. But also, some part of her, however deep down, fell in love with the beast. I’m sure she could do without him murdering people left and right and constantly being a deceptive douchebag, but there’s some part of her that keeps going back to him despite his flaws.

Clearly she’s in love with the evil, power-hungry Rumple as much as she is the sweet, romantic one. It’s about time she realizes this for herself and decides whether that’s something she’s ok with. Rumple being completely honest with both her and himself was refreshing, and I believe it pointed at him finally wanting to make this work between him and Belle. Ball’s in her court now.

Belle and Rumple were a good respite to the disappointing return of Zelena, but the real highlight of the episode was Henry. Angsty teen Henry has been nothing but hilarious, and the magic behind his writing the Storybook is awesome. His line, “Oh. So you’re all authors now? Everyone’s a writer. Everyone’s got an idea,” is something I’m sure every reviewer of Once Upon at Time will have trouble leaving out.