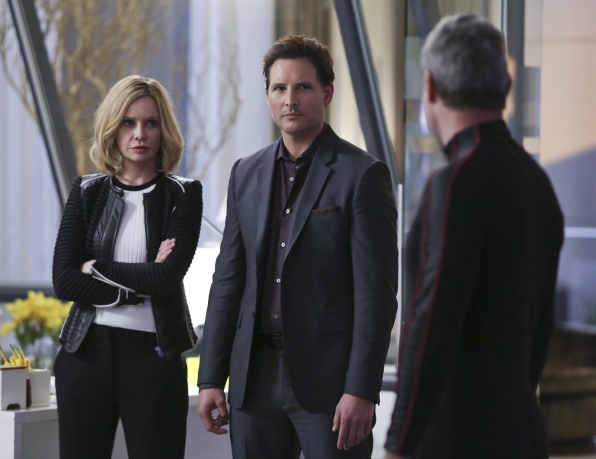 “We’re way past villains of the week and kittens stuck in trees.” How right you are, Max. This week’s episode of Supergirl may not have been the most interesting episode, but it kept the exciting pace of the past few weeks going with its final reveal of the looming threat that has been hanging over the entire season. And it’s not looking good.

Myriad has finally been activated which means that all of National City has been turned into mindless zombies. I thought that zombies only existed on Sunday nights, but I guess now they’ve made their way over to Tuesdays as well.

Luckily, not ALL of National City is under Non’s control. Unluckily, the fates of everyone rest on the super team of Supergirl, Cat Grant, and Maxwell Lord. Yikes. It was pretty weird that Max and Cat seemingly just happened to be exempt from the mind control, but the writers of Supergirl had an explanation: ion blockers. Pretty flimsy if you ask me, but they ran with it regardless.

Yeah, Max is a genius and could theoretically come up with this sort of technology. And sure, he’s also a douche who doesn’t trust the DEO, so it makes sense for his character to keep the technology all for himself (and Cat). But it felt more like the writers of Supergirl were grasping for any feasible way to have Max and Cat be immune to Myriad, and what they landed on ended up seeming just a little too convenient.

Especially given how random the rules behind Myriad’s mind control were. At first I thought it was only affecting humans. But even Superman – who I thought we were finally going to catch a glimpse of – has been taken over by Myriad. Max had an explanation yet again: nature vs. nurture.

I guess that kind of makes sense, although Kara was pretty young when she came to Earth as well, so by that logic shouldn’t she be somewhat affected? She’s as much an Earthling as she is an alien, but maybe there’s a certain cut off based on how much the percentage of each is? Like Superman is 60 percent human and 40 percent alien, but Supergirl is 50-50? There’s no clear rationale behind it.

Myriad’s inner workings got even hazier with Alex’s decision to go back to National City to help her sister. Because no threat of turning into a zombie is going to stop her; girl doesn’t know how to listen and just stay out of it for once. She decides that Hank/J’onn can use his telepathy to “guard” her mind. This seemed really weird and like it wouldn’t work, but of course it did, because convenience. Or it did until J’onn was stabbed and Alex was kidnapped, at least.

By the way, DOES THIS MEAN J’ONN IS DEAD?! Indigo made it seem like he was, but I feel like he deserved a much more noble and shocking death than that; I needed more time to feel sad about it. Maybe I’m just in the denial stage, but I feel like the Green Martian race can’t possibly be extinct yet.

Speaking of dead people, poor Kelly. She never really stood a chance. Honestly, I thought Supergirl was going to have to choose one of the three “skydivers” to save, and for a split second I was really worried. Except no way would the writers of Supergirl have killed off Winn or James.

Does it make me a bad person that I kind of wish they had? I feel like Non would have been much scarier had Supergirl been forced to decide between her two best friends. I mean, who actually cares about this Kelly chick anyway?

However, where Supergirl fails in creating a believable threat to its main character’s lives, it excels in its week-to-week cliffhangers. Will Cat and Max be able to override Myriad with their message of hope before Alex or Kara is forced to kill the other? Obviously, but still, excitement awaits us in next week’s finale.