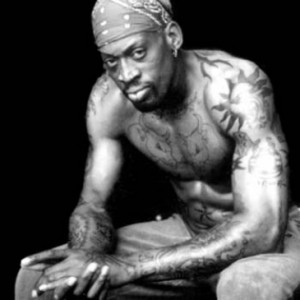 A lot has been made of Dennis Rodman’s basketball diplomacy campaign, sponsored by Kim Jong-un, the water-headed, paddle-handed genetic hot tub who inherited North Korea from his father.

Rodman has called Kim his “best friend” and has participated in nauseating sycophantic behavior towards the dictator while in No Ko, including bowing to him and serenading him with “Happy Birthday.”
This is a new low. Only in 2014 could the man who, throughout his NBA career and after, went so painstakingly out of his way to seem different—mostly aesthetically by dying his hair or dressing like a woman—start kissing the ass of a dictator in the most cognitively homogenous country in the world—a country that actually punishes individualism by way of concentration camp and literally tells its citizens what to think.

During his playing days, some thought of Dennis Rodman as a pioneer of, what, free-speech, non-conformity? Now that I think about it he was just some gimmick-ridden drunk with a personality disorder who dyed his hair. Would we even be talking about him right now if he hadn’t died his hair? Is that all it takes?

Bob Costas was right. Rodman never stood for anything.

Here is the definitive proof:

Rodman is a five-time NBA champion. While never close to the best player on any of these teams, he was invaluable. He prided himself on playing harder and tougher than anyone else in the league—and watching him play, it still seems hard to make a case against that.

Yet on Rodman’s most recent trip to North Korea, he and his team, which included New York street ball legend and former NBA All-Star Kenny Anderson, four-time NBA All-Star Vin Baker, former NBA standout Charles Smith—you know what, enough with the credentials: the entire team was made of guys who were standout players in the NBA—lost by a score of 47-39 in regulation.

True that the players on Rodman’s team are in their mid-forties to early fifties, but they lost to a team that has never participated in legitimate international competition—the only records I can find are of them finishing second in the 2010 Asian Games in front of Thailand, and behind a team which isn’t mentioned.

Their starting center, Chol-Kim-un, is listed at 6’4″, which would be embarrassing even if it were accurate, although he’s obviously closer to 5’4″.

True, North Korea is benefited by one of the stronger home court advantages in all of competitive sports, since it seems quite reasonable that they will murder or enslave you if you beat them.

Which is I’m sure what happened. Rodman and his teammates let the Koreans beat them.

The one thing Rodman had going for him was that he was a winner. In his thirst for … whatever he is going for, he sold that.

There is nothing left of him.

An empty shell, void of integrity, who has been bought and sold, and used in the name of oppression, and who didn’t have the guts to compete when it could have really mattered.

Because he was scared.

Many of the players on this team were already losers, but now they will be cemented as worse—cowards.