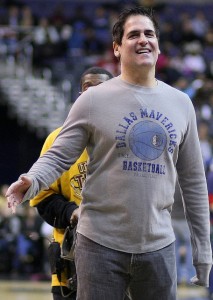 The Mavericks have been valued at $765 million by Forbes magazine, but that’s a low-ball number as far as owner Mark Cuban is concerned.

“They’re way too low,” he said.
So if somebody showed up with $765 million in his pocket and wanted the team he’s owned since 2000, what would Cuban do?

“I’d laugh at them,” he said. “I think we’re worth well over a billion. I think within the next five years, and this is just a guess, if the economy continues to get a little better and sports still stays in demand, every NBA franchise will be worth at least a billion dollars.” Dallas Morning News