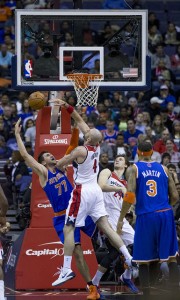 Andrea Bargnani’s crash landing on a failed dunk attempt Wednesday night was an instant hit across the Internet, but one day later it became just another major hit in a disastrous season filled with them for the Knicks.

Bargnani, the team’s second-leading scorer behind Carmelo Anthony, is out indefinitely —which conceivably could mean the rest of the season — after he suffered a torn ligament in his left elbow on the third-quarter play. He initially continued playing before the sinking Knicks went on to lose to Philadelphia to run their skid to five.

The 7-foot forward drove through the paint and attempted to dunk over Thaddeus Young and Elliott Williams, but he was fouled and landed well short of the rim as he crashed hard to the floor. Andrea

Bargnani stayed in the game and hit both free throws, finishing the game with 20 points, but the elbow tear was revealed Thursday in an MRI. The former No. 1 overall draft pick suffered a sprained right elbow with the Raptors last March, and he missed the remainder of the season.

The loss of Bargnani, who is averaging 13.9 points while appearing in all 42 games (39 starts), takes away yet another big man from the Knicks, who already are shorthanded up front with reserve forwards Kenyon Martin and Amar’e Stoudemire sidelined by ankle injuries. New York Daily News

There is nothing wrong with knowing your lane. That’s not your lane, sir. – AL