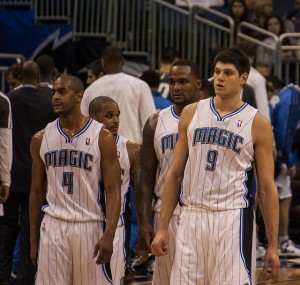 Following up an exhilarating win at home on Friday night against the Oklahoma City Thunder, the Orlando Magic welcomed another one of the top teams to their beautiful Amway Center. This time, it was the Eastern Conference’s best team, the Indiana Pacers. While the game didn’t have the buzzer-beating drama Friday night’s did, it was following closely, trying desperately to catch its counterpart. While it wasn’t pretty, especially late, the Magic were able to storm back and upset the Pacers 93-92.

Falling down by as many as 17 in the second half seemed to have doomed the Magic. Yet, they didn’t give up, showing the same resiliency that allowed them to chase down the Thunder, from notably the same deficit, on Friday night. Yet, the question arises: How did they do it this time?

As multiple players, particularly Victor Oladipo and Maurice Harkless, noted, it was the team’s defense that got them back into it. They both preached that they must allow their defense to lead to offense throughout the game, especially with the lightning in a bottle second unit. After holding Oklahoma City to 37 second half points, the Magic, thanks in large part to the second unit’s play, held Indiana to 40 points in the deciding half.

Orlando surged into the lead early in the fourth thanks to a big stretch from the electrifying Oladipo. Scoring 12 points in the first six minutes of the quarter, the Indiana product looked locked and loaded for whatever the game was going to bring forth. His length, athleticism, speed and motor allowed him to cause havoc all over the court. From tipping balls, to jumping passing lanes and leading the fast break, Oladipo was doing it all.

However, Oladipo couldn’t do it just by himself. Harkless slowed down Paul George, holding him to just one field goal in roughly nine minutes of action in the third and fourth quarters. Glen Davis checked back in and made big play after big play, trying anything and everything he could to help his team secure the victory. Yet, it almost wasn’t enough.

The final 14 seconds felt like an eternity, with the Magic struggling to get the ball inbounds. After using their final timeout with nine seconds left, they were faced with another side-out play, one that ended in a turnover. Magic fans and players held their breaths as George elevated … three hands in his face … and missed. The Magic grabbed the ball and held on to win in dramatic fashion once again.

Thanks in large part to his big fourth quarter, Oladipo led the Magic in scoring with 23 key points. His shot was falling from everywhere, as he continued to spew confidence at key moments of the game. Big man Nikola Vucevic got going early, scoring 19 points and grabbing a game-high 13 rebounds, en route to his 21st double-double of the season. Tobias Harris was the final Orlando man in double figures, finishing with 13 points, including five big fourth quarter points.

On the other end, the visiting Pacers had a slightly more balanced attack. The aforementioned George had his way for much of the contest, finishing the game with 27 points and seven rebounds. All-Star “snub” Lance Stephenson, returning to the lineup after a one-game absence, gave the team 16 points and nine rebounds, while point guard George Hill, coming off a career-high 37 points, scored 12. The final Pacer in double figures was bruising power forward David West, who fought and clawed his way to 14 points.

After being outscored by the Pacers bench 49-19 in a loss just six days prior, Orlando returned the favor on Sunday night. While the margin wasn’t as large, they were able to get 20 more points out of their reserves than Indiana did. Head coach Jacque Vaughn has stressed how important it is for his second unit to play well and win the battle of the benches, and they have. Coming into the night, the team was averaging 41 points off their bench during their four-game home winning streak. They’ve been able to find the perfect balance with their second unit, and their recent hot play has shown. It’s big for them to continue to play well, and if they can, the Magic could very well continue to string victories together.

“It starts with his energy and his enthusiasm for the game of basketball. It’s just, for a coach, it’s extremely gratifying to be around and it doesn’t change. He’s that way every day. He’s really infectious to his teammates, they want to play for him, they want to play with him and I’m sure glad he’s got on a Magic uniform.”

Frank Vogel on if the Magic looked different at home:

“Yes, they played more confident at home. There’s no question about it. Victor’s growing as a basketball player. He was the one leading the charge for the second unit. You’ve got to give him credit.”

Orlando held the Pacers to an abysmal 11-38 from the field in the second half.

It was the Magic’s fifth win in a row at home, and sixth of seven.