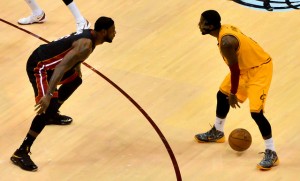 Kyrie Irving validated the fan vote and offered a glimpse of how good he can be when surrounded by first-rate players.

The Cleveland Cavaliers’ point guard was selected as MVP of the NBA All-Star Game Sunday night after scoring 31 points, racking up 14 assists and playing with the energy required to rally the Eastern Conference from an 18-point deficit in the second half of its 163-155 victory over the West.

“It was definitely special, just being out there with all these great athletes,” Irving said. “There’s so many different NBA All-Star MVPs out there on that floor, and to be named MVP amongst all those great stars is truly an honor.”

Irving missed only three of the 17 shots he attempted, and all of those were from 3-point range, where he was 3-for-6.

He was at his best in the second half, hitting 11 of 13 shots and dishing out seven assists. Often refusing to settle for long jumpers unless they came in rhythm, he went hard to the basket and finished, showing the competitive spirit often lacking in All-Star exhibitions.

“I feel like that’s what all the fans want to see us do is just compete at the highest level,” Irving said. “I just wanted to give the fans what they wanted.” Associated Press

It’s hard to explain to someone who didn’t watch the game how lackadaisical everyone was on defense during this game.  The halftime score was 89-76 in favor of the Western Conference, and they only lost the lead because Kevin Durant and Stephen Curry had a stretch where they wouldn’t stop jacking up shots from 30 feet, shooting 8 out of 28 from behind the arc combined.

Overall, fun game to watch and we even got some sideline Kobe.

Kobe’s still found a way to dominate the All Star game pic.twitter.com/9HKDvlL2lE

Note: The Kobe stats are unofficial until verified by the Elias Sports Bureau.