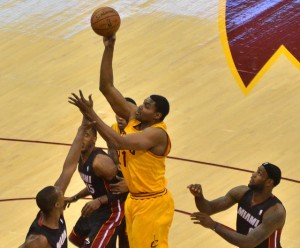 When the Indiana Pacers signed Andrew Bynum for the sum of $1 million dollars, it was and still is a head-scratcher. Undoubtedly, Bynum can contribute to any team in the league and has the talent to perform on a high level, but history has proven that you don’t mess with a good thing. While the Pacers currently sit in the Eastern Conference driver seat, Bynum was positioned at the opposite end of interest for 29 teams, all of whom are looking to compete.

On paper the Indiana Pacers added an enormous talent to their already strong lineup, and whether it was an effort to increase the Pacers’ overall production or prevent a production boost in the opposition, one question remains: what effect will Andrew Bynum have on the seemingly tranquil Pacers locker room?

In all fairness to Bynum, the popular adage of “believing the hype” is a two-way street, with the possibility of serving as a negative or positive connotation. The hype surrounding Bynum has been that his passion for basketball is long gone, his work ethic only parallels the size of his contract, and in a locker room, he’s a cancerous teratoma with the a knack for disruption and general manager regret.

However with all of the rumors swirling around Bynum’s exit from the Cleveland Cavaliers, his “upside” has kept him on the radar of numerous NBA team executives who have carefully weighed the pros and cons of adding Bynum to their squad. A majority of which have declined to add the troubled center, until only one (out of 30) said yes. After hosting his own personal three-point challenge in a Los Angeles Lakers uniform, sustaining an injury while bowling and shooting the ball every time he touches it in his final practices with the Cleveland Cavaliers, not to mention the outlandish hairstyle choices, Bynum has received another shot and the pressure is on for both Bynum and the Pacers.

Indiana is currently playing well enough to contend for the Larry O’Brien Trophy without Bynum’s addition. With this signing, he’s in the most precarious position of his career, as Bynum will be the easiest target to blame if the Pacers somehow don’t win it all. Upon unfortunate circumstance, such as an early exit or finals defeat, if there’s any rumor of locker room disruption, Bynum will be untouchable in the kind of way that gives agents and managers nightmares.

A string of poor games from Roy Hibbert, a benching from Pacers coach Frank Vogel, or anything that serves as a catalyst for Bynum to express his dissatisfaction is fuel for trouble, and with a lack of veterans in the locker room, who’ll help Bynum simmer down if the aforementioned comes to pass? It would be in Bynum’s best interest to spend the latter half of the season as a goodie-two-shoes. However, with his tendency to find chaos in such a short amount of time, the Pacers’ ground is and will remain shaky with every step Bynum takes around the Eastern top dogs. Hopefully he’ll make the remainder of Indiana’s season famous, and not infamous.