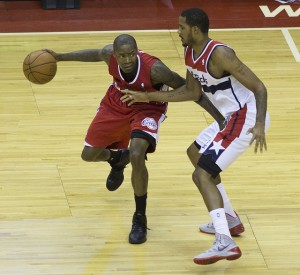 NBA scoring leader Kevin Durant marveled at what Jamal Crawford did to his team.

Durant scored 42 points, but such performances are almost expected from him. Crawford, on the other hand, averages about 19 points.

He’s known to be streaky, and in this game, he was on. He made 5 of 8 3-pointers, many of which were launched from well beyond the line.

”Jamal Crawford comes across halfcourt shooting,” Durant said. ”You’ve got confidence once you start seeing the ball go in the rim.” Associated Press

Jamal Crawford is considered one of the best sixth men in the league and he demonstrated why (although he did start in this game). The display was impressive but the Clippers really should have done something to improve their bench before the trade deadline. The Clippers’ bench only accounted for nine of the team’s 125 points. J.J. Redick is out indefintley with a back injury, but is expected to return in time for the playoffs.

The Thunder are now 0-2 with Westbrook back but they also played two of the best in the league in these losses. No one can blame these losses solely on Westbrook without being bias. Let’s see a few more games before making broad claims about how much he hurts the team. – AL