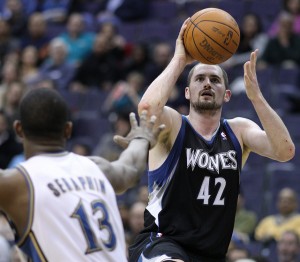 Kevin Love recorded his 50th double-double of the season on Monday night with 33 points and 19 rebounds. This in a win over the Denver Nuggets that put Timberwolves five games behind the Mavericks for the final playoff spot in West.

The win was their sixth in the last seven games and got them over the .500 mark for the first time since January 31.

Getting over the .500 mark is nice, but it will be extremely difficult to make up the five-game gap with only 23 games remaining this season. They are stuck in the tenth spot, four games back of Memphis who is also competing for that eighth seed.

They would have to either continue their winning streak or hope for a major collapse from the Golden State Warriors, Dallas Mavericks, Phoenix Suns, or Memphis Grizzlies, which seems unlikely for any of those four at this point in the season.

Fifty double-doubles is nice, but it seems that Kevin Love will fail to make the playoffs for the sixth time in six tries. Not exactly a good reason to stay in Minnesota.

Love may opt out of his deal following next season. The former UCLA Bruin could easily return to LA and join the Lakers, who will by then have Kobe Bryant’s monster contract off the books.

Love’s departure could usher in a new era in LA, following the legendary run of Kobe Bryant.

If Kevin Love does indeed depart Minnesota in the summer of 2015 without ever making the playoffs, he will certainly face some criticism.

This type of criticism is unwarranted.

When healthy, Love is one of the top players in the league, let alone at his position. He has a career average of 18.8 points and 12.3 rebounds a game. Saying that he is not doing enough to lead his team to the playoffs is unfair. The only time he affects the team negatively is when he is hurt, which is out of his control.

There would have been more time for Kevin Love in Minnesota if not for David Kahn and his refusal to offer Love a five-year max deal. Talk of Kahn’s laughable decisions could go on for days. Flip Saunders now has the job of trying to make next year’s team a contender to try to entice Love to stay.

Making the playoffs this year would have helped immensely, but as it is right now it appears next year will be a season-long audition for the teams in markets that can afford the services of Kevin Love