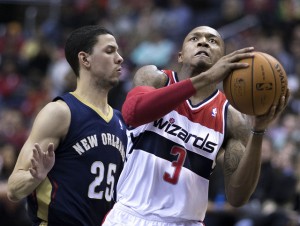 The New Orleans Pelicans have been terrible for a while now in the faint hopes of retaining their protected first-round pick they traded away to Philadelphia. They’re 10-22 since the turn of the calendar, and have been a gong show defensively the entire year. Their overall record is 24-37 and it’s going to get worse. Jrue Holiday is gone for the rest of the season with a broken leg, Ryan Anderson is probably in the same boat with his herniated discs, and even when healthy this team was no better than an average basketball team. With their season in shambles, something interesting has happened: Austin Rivers has gotten more playing time, and he hasn’t been awful.

I know, the bar being “not awful” isn’t exactly something that exudes confidence, but we have to remember just how bad Austin Rivers was last year. For players that played at least 40 games at 20 or more minutes in their rookie year since the advent of the three-point line, Rivers ranked last in PER, sixth-last in TS% and was second-last in WS/48 behind only the immortal Shawn Bradley. The defining image of Rivers’ rookie year would be his wild and unsuccessful forays to the rim that ended horribly. To say that Rivers didn’t make the leap from the college game to the pros successfully last year would be an understatement.

All of what I’m going to say in favor of some of the progression Austin Rivers has made this year does come with caveats. Even with the progress, he’s still a below average offensive player. His PER is still way below the league average at 15, he’s below a TS% of 50, and he isn’t much of a passer at all. For a guard who’s one skill is putting up shots, it’s a bit discouraging that he isn’t even an average three-point shooter.

But there’s something intriguing with the guy. For someone who values passing the ball in the same manner I value vegetables, he’s actually okay in limiting turnovers in pick-and-roll situations. Rivers has only turned the ball over on 12.1 percent of his possessions as the pick-and-roll handler, down from 15.1 percent last season via Synergy Sports. He’s improved his points per possession on pick-and-rolls that have him as the ball handler from 160th last year to 120th this year. He ranks 70th in isolation PPP and he’s shooting 47.5 percent on spot-up three-pointers. That is the framework of a useful offensive player, particularly when you consider he’s playing fewer minutes as the prototypical shooting guard.

According to Basketball Reference, Rivers has been playing as the point guard 75 percent of the time this year, a massive increase from nine percent last year. The positional matchups have helped Rivers. At 6’5″ with a wingspan just over 6’7″ (courtesy of DraftExpress), Rivers is a bit on the small side as a shooting guard. By playing as the point guard and being guarded by players usually two to three inches smaller than him, it’s given Rivers more chances to size up his opponents and turn the corner without getting stripped of the ball:

Perhaps his best trait as an NBA player is the fact that he’s relentless. The guy’s not afraid at all of throwing his body around and drawing contact. It’s an admirable trait to have. He’s become quite good at angling his body against a big man and flipping shots in at difficult angles. The way he contorts his body despite playing at such a breakneck pace is a marvel to watch, and it’s promising that Rivers has improved from 40.4 percent to 47.2 percent in the paint with the flashes here and there of his ability to stop and go.

With the ball handling abilities he possesses, he’ll have to improve markedly as a passer. His best attributes (fearlessness, ability to draw contact) also accentuate his worst qualities as an offensive player. He has tunnel vision and is still raw in terms of reading NBA defenses. I’m not sure how much of this comes from his past experiences when he was modeling his game after Kobe Bryant, and I don’t like to speculate on how much idolizing has a psychological effect on future developmental curves of players in comparison to perhaps more tangible reasons like role designation. It can be entirely related to simply what he had to do for Duke and what Mike Krzyzewski asked of him.

His defense needs work but that possibly can be attributed with the many different schemes the Pelicans employ with their big men. The NBA is essentially a pick-and-roll league now so I can imagine how difficult it is as a guard to defend the screen when you’re having confusion with your big man in terms of icing these situations, sagging back, going over the screens. We often focus so much (understandably so) on the big man that it makes us forget how vital the guard is in executing the right game plan. Guards won’t get the limelight in these scenarios, they won’t have a verticality rule distinguished after their work, but they’re just as important. All of that is a roundabout way of saying I don’t know how good Austin Rivers is on that end, and on a team that’s near the bottom of the league in defensive efficiency, it’s tough to be a good defensive player when you’re hemorrhaging points on that end (unless you’re Anthony Davis). I have hope that he’ll turn into an above average defender with the length he can impose as a point guard in the correct system. He’s simply a 21 year old learning the ropes as a NBA player.

In the grand scheme of things, the fact that the Pelicans season has turned to the point where Austin Rivers is getting more playing time is discouraging when you factor in their offseason dealings. This team envisioned the playoffs, and well … they won’t get there. They’re fighting tooth and nail to recover the first-round draft pick they traded away to the Philadelphia 76ers, and have turned that into more playing time for Austin Rivers. There’s promise in what he’ll become but he’s still smoothing out the rough edges of what he currently is. He’s only 21 years old, and sports in general has reminded us time and time again of the silliness that comes with giving up on young athletes. He won’t be Kobe, but I have faith he’ll carve out a nice niche in the NBA.