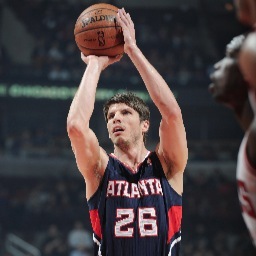 Despite the disappointment of losing his 127-game streak with at least one made three-pointer, Kyle Korver has not stopped making threes.

In fact, he is shooting better than he has all season.

It seems hard to believe that somebody who is leading the league in three-point percentage at 49.1 percent can actually be improving on that figure at this point in the season, but that is exactly what Korver is doing. In 13 post-All-Star Weekend games, Korver has hit 59.7 percent of his threes (40-of-67). Even better, Korver has been on fire since the streak ended, shooting 71.4 percent in the five games since the heartbreaking night in Portland.

Besides a 1-for-5 night from deep in his first game after the broken streak (who can blame him, he probably just wanted one to start another streak), Korver has shot 3-for-3, 4-for-4, 3-for-5, and 4-for-4 from beyond the arc, all while averaging 19 points over that same four-game stretch. More importantly, the Hawks have gone 3-1 in those games to break out of the 1-14 skid they went on throughout February and into March.

While there will be a bit less excitement on Korver’s first three-pointer of every game now, the end of the streak doesn’t mean that there aren’t records to eye while watching him shoot. Korver’s current three-point percentage of 49.1 percent would rank as the 10th-best season in NBA history if he is able to maintain it, an accomplishment that would place him with Steve Kerr as the only two players with multiple entries in the highest single-season three-point percentage leaderboard when you take into account that Korver already holds the all-time record at 53.6 percent in 2008-09. At the pace he is going now, I would say there is a much better shot that he moves above the 50 percent mark rather than stay below it.

It is still tough to acknowledge that Korver’s streak is gone, especially as most Hawks fans have been bludgeoned with the reminder that Steph Curry is now the consecutive-games-with-a-three-pointer streak holder with 56, and will have a great chance at breaking the record if he keeps putting up eight threes a game. But for those of you who are fans of random stats (who isn’t?), at least you can take solace in the fact that Korver leads the NBA this season in the least games without a made three-pointer (one), as Curry actually failed to make a three twice during a five-game span near the beginning of the season.

So while the end of the streak may seem tough now, don’t cry. Instead, appreciate the streak for what it was—127 games of beauty. Every time Korver steps out onto the court, his opponent knows that he is trying to rain down threes all over them. And for 127 games in a row, Korver was able to do so, despite intense pressure coming off every screen, and quick closing defense on every fast break as he leaked out to the corner. For 127 games, Korver made me believe that maybe he had some magic three-point shooting dust hidden in his hair, so that every time he brushed it off his forehead, he got just enough on his fingertips to sink the next shot.

Without the streak to look forward to every game, it is still worth keeping an eye on where his shooting this season lands him on the all-time single season leader list. And who knows, there is still a shot that he might break his own record before his time in Atlanta is done. If I have learned anything from Korver this year, it is that if there is a shot, he is willing to take it … and likely make it.