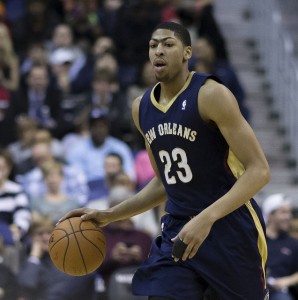 Over the years, plenty of young players have been touted as “can’t miss” prospects. With the advent of the Internet and the 24-hour news cycle, it has become a virtual certainty that the media will ordain at least one fledgling prodigy for greatness in every NBA Draft. Whether these young athletes live up to their billing, however, remains a shakier proposition.

A surprising number of top draft picks have flamed out over the years, crushed under the weight of great expectations or fundamental flaws in their game. It takes a rare blend of skill, moxie and mental acuity to achieve NBA stardom, and despite rigorous scouting and preparation, front offices still find it astonishingly difficult to identify players who will thrive. Tempted by alluring size or athleticism, general managers will often reach greedily for the “next big thing,” only to be rewarded with fool’s gold at the end of the rainbow.

But every now and then, a prospect emerges genuinely deserving of the praise heaped upon him. These young men are generational players — Kevin Durant, LeBron James, Shaquille O’Neal — and their unique skill sets and dominant play come to define an era of NBA basketball.

Struggling teams blessed with the opportunity to draft one of these remarkable talents are put in a position to reverse their fortunes instantly. The Orlando Magic paired Shaquille O’Neal with Penny Hardaway in 1992 and two years later rode that duo to their first ever NBA Finals appearance. The Cleveland Cavaliers drafted LeBron James in 2003 and surged into a half-decade of relevance, recording multiple 60-plus-win seasons and contending perenially for the title. Since 2007, The Oklahoma City Thunder have been enjoying the Kevin Durant Era and their prospects look bright for the foreseeable future.

Now, in 2014, the New Orleans Pelicans have Anthony Davis.

These numbers speak to Davis’ substantial improvement since his rookie year, during which he rebounded (10.4 per game) and blocked shots (2.2 per game) at a comparable rate, but constituted less of an offensive threat (16.9 points per game).

He has proven a more aggressive and polished finisher around the rim this season, both seeking and finishing through contact more frequently. His free-throw attempt rate has increased more than ten percent from last year — from .333 to .435 — which has allowed him to pump up his scoring average without eating up too many of his club’s possessions. A.D. only averages 15.3 field goal attempts per game, a fully reasonable proportion for a team’s best player, and could probably stand to take an even more commanding role.

Davis has also developed a serviceable mid-range jump shot, and is hitting 44.3 percent on shots from -. This mark outstrips Blake Griffin, much lauded for his improved jump shooting, by about a percent and a half.

Everyone expected Davis to be a game-changer on the defensive end, and he has, but his rapid offensive development has caught pundits by surprise and caused predictions of his greatness to grow even more bullish.

That being said, the young forward’s prodigious maturation on the defensive end should not be overlooked.

Davis’ help defense, a weak point last year, has stabilized significantly. Gone are the hectic, loping closeouts on shooters and the absent-minded blown rotations. “The Brow” is directing traffic for his squad, covering for teammates, and making subtle body shifts in the paint to discourage forays into the lane before they begin.

He has learned to use his intimidating presence as a weapon in and of itself, a valuable and energy-saving technique that takes most big men several years to master – if they ever do. Davis’ enhanced defensive IQ has also allowed him to reduce his per-minute foul rate* and spend more time on the court helping his team win.

Taken together, these developments have turned him into a superior player, both on paper and in reality.

Finally, a cherry on top of Davis’ sundae of a season: his Player Efficiency Rating (PER) stands at an otherworldly 27.1, good for fourth best in the league behind only Kevin Durant, LeBron James and Kevin Love.

As a rookie, Davis posted a 21.7 PER, already comfortably above the 15.0 league average, but the leap from good to great is one that many players struggle to accomplish at all,** let alone achieve in the space of a year. Producing a 5.4-point jump in PER, particularly in spite of increased opponent attention Davis has faced this year, is just a remarkable feat.

When we examine Davis’ career to date, the growth is exponential and his potential seems limitless. As his legacy unfolds, we may very well have to come to grips with the fact that we are witnessing the birth of the next generational superstar. In five, or seven, or perhaps even nine years, Davis will have the opportunity to seize the mantle of “best player alive” and carve his own chapter in the annals of NBA history.

New Orleans is blessed to have Anthony Davis, to be sure: but so are we. As fans of the game, we need every now and then for one of the prodigies drafted each June to match the mythical expectations we set for them. Legends are what keep the lore and mystique of the NBA alive, and with any luck, Anthony Davis will be the next man to bear that torch. All that’s left to do is watch.

* Davis is still committing 3.1 personal fouls per game, but they are spread across an average of 35.9 minutes per game. Last year, Davis hacked the same amount in just 28.8 minutes of play.