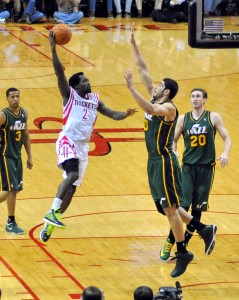 Rockets guard Patrick Beverley has reportedly suffered a meniscus tear that will put the remainder of his season in jeopardy, according to Yahoo! Sports.

The injury was sustained during the second quarter of Thursday’s game against the 76ers — a blowout in the making during which Beverley was forced to call a timeout as a means of exiting the game. He was originally diagnosed with a right knee sprain, though the reported clarification obviously holds more severe implications for a team in position to contend for the title.

The severity and location of the tear are both publicly unknown at this point, leaving the possibility open that Beverley could return for the playoffs in a best-case scenario. A meniscus removal, rather than a repair, carries a far shorter timeline that would allow Beverley to return relatively quickly. Otherwise, we’ve seen Chicago’s Derrick Rose miss the majority of the 2013-14 season with a medial meniscus tear and Oklahoma City’s Russell Westbrook sidelined for the 2013 playoffs after suffering a lateral meniscus tear. He eventually returned to form, though Westbrook is still under a minutes restriction as a result of undergoing two subsequent surgeries on his injured knee. Sports Illustrated

We almost made it three entire months without a serious injury to a title contender. It was a nice run.

Beverley has earned a reputation around the league as a high energy, pesky defender capable of elevating the Rockets’ defense beyond the average club. Jeremy Lin will have to bring a pinch of Linsanity to ease the loss of Beverley although no one can replace the defensive tenacity he brings.

Dwight Howard is also battling injuries and could miss some regular season games to rest before the postseason arrives.

The Rockets were considered a title contender before losing Beverley, but the narrative will definitely shift after this injury. I’m not sure it matters since the club is a least one major move away from winning the title. – AL