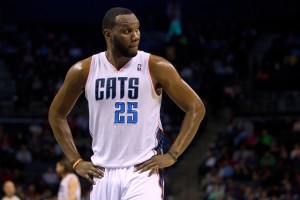 With just a few games remaining, the Orlando Magic have been trying to close out the season on a strong note. Last evening they had another opportunity to improve their record in Charlotte taking on the Bobcats. This was the fourth meeting between the two ball clubs, with Orlando leading the series 2-1. The last time the Magic and Bobcats faced off, Nikola Vucevic had his way with 24 points and 23 rebounds. In fact, the matchup between Vucevic and Al Jefferson is quite favorable for the Magic, as Vucevic has averaged 18 points and 18 rebounds against the Cats this season. Unfortunately for Orlando, Vuc was a late scratch in this one, sitting out with a sore left Achilles. Andrew Nicholson started in his place, notching  just his fifth start of the year.

In the absence of Vucevic, Al Jefferson was off to an early start, scoring the first points of the game and forcing an airball by Kyle O’Quinn. Andrew Nicholson has been picking up fouls in bunches lately and last night was no different. He tallied two fouls in the first six minutes, forcing Jacque Vaughn to call the number of former D-Leaguer Dewayne Dedmon early. Dedmon has been active and impressive in the few sporadic minutes he’s played this season, but tonight was his first chance to get significant action on the floor.

The score remained tight throughout the first quarter, and with just a few minutes remaining in the period, Bobcats fans experienced a scary moment. Former second overall pick Michael Kidd-Gilchrist drove the lane and came down hard. He stayed on the floor for quite some time, but was able to walk to the locker room on his own. His X-rays came back negative and he was officially diagnosed with a back bruise, eventually returning to the game after the half. Jefferson continued to dominate the quarter, finishing with 10 points and 6 rebounds leading his team to a one-point advantage.

The rest of the first half saw very little offense for the Magic and no one really stood out. The Bobcats completely took over the game towards the end of the half with Jefferson continuing the make his mark on the offensive side of the ball and on the glass. He finished the half going 10-of-13 from the floor and was a large part of the halftime score of 53-36 in favor of the Bobcats.

The Orlando Magic were desperate for a spark, needing someone to match the play of Jefferson if they had any chance at battling back into the game. There was no answer found in the third quarter as the Bobcats continued to maintain their large lead.

The Bobcats committed eight turnovers, allowing the Magic to go on a 10-0 run spanning into the fourth quarter. Although Orlando was still down by double digits, they suddenly found new life and played with an increased sense of urgency. As the quarter progressed, the Magic were able to cut the lead to single digits behind strong defensive play. Tobias Harris and Victor Oladipo started scoring, something neither of them were able to do through the first three periods, and the Magic were in striking distance.

The Charlotte Bobcats responded, extending their lead back up to 14 points with five minutes remaining. Orlando was not able to come up with another late surge and the Bobcats held on to win it with a final score of 91-80 to tie the season series between the two ball clubs.

Jefferson had one of his best games of the year last night. With Vucevic on the bench Jefferson saw his opportunity and took it. He came up big for his team and really could not be stopped. Orlando sent multiple guys his way but he continued to dominate from tip-off to the final whistle. Not only did he put up big numbers, but he was efficient as well. He finished the game with 29 points and 16 rebounds on 13-of-24 shooting.

Orlando struggled offensively as they finished the game with just 80 points. To add insult to injury, Orlando shot just 35 percent from the floor and 27 percent from three. The team’s two leading scorers, Oladipo with 21 and Harris with 15, both came off the bench. It was a tough night all around, and the absence of Nik Vucevic was definitely felt.

With Vucevic sidelined, Dewayne Dedmon saw extended minutes for the first time this season. Dedmon was very effective in his time and extremely active, as is his reputation. His energy on defense was one of the bright spots for Orlando despite Jefferson’s big night. He contributed seven points and eight rebounds in 18 minutes off the bench.

The Magic tallied just four fast break points compared to 14 for the Bobcats.