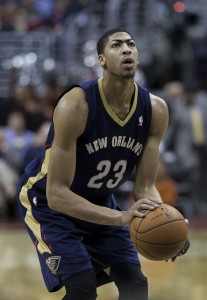 The New Orleans Pelicans announced today that forward/center Anthony Davis (back spasms) and guard Eric Gordon (left knee) will miss the remainder of the season.

Davis was examined by team physicians, who determined that his injury will require 1-2 weeks of rest and rehabilitation.

Gordon will undergo arthroscopic surgery on his left knee next week and is expected to make a full recovery. NBA

Better safe than sorry when there’s nothing on the line. Gordon and Davis had small injuries during this season that could creep up anytime. Gordon in particular has frequent, nagging knee problems so sitting him is completely understandable. Fans will be disappointed that The Brow is missing these games, but we will have plenty of time to see his untapped potential.

The future will be bright in New Orleans as soon as they find an actual point guard to play with Davis, and stop getting players who do the exact same thing in the 2 and 3 spot. – AL